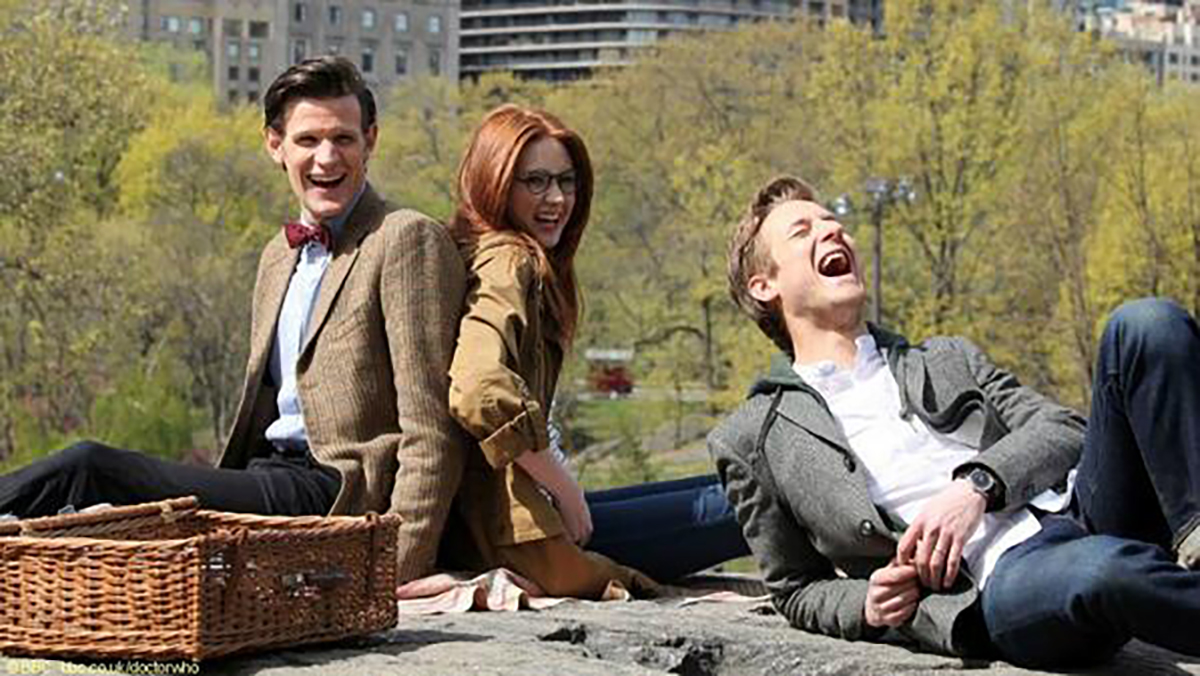 The Doctor Who 60th anniversary special is keeping fans on their toes. We know that David Tennant and Catherine Tate are returning to the series and that Russell T. Davies is returning to write, but the rest of the information about the future of the show and the special is a bit up in the air. With Ncuti Gatwa’s first appearance as the Doctor coming our way, there are still lots of questions about who is going to show up for the anniversary. And with three specials coming for the 60th … there are plenty of possibilities for fans.

And now, some eagle-eyed fans have seemed to pick up on some interesting developments where the Ponds are concerned. For Matt Smith’s first season as the Doctor, we got to meet Amelia “Amy” Pond, played by Karen Gillan, and her best friend and boyfriend Rory Williams, played by Arthur Darvill. The companions stayed with the Doctor for over two seasons but left halfway through the seventh season when Amy and Rory sacrificed themselves and their freedom (forced to stay in New York in a past decade) and they were separated from the Doctor.

It was a devastating goodbye and one that I, as a New Yorker, often think about, and I go to the bridge where the Doctor read Amy’s letter sometimes just to think. This was one of my favorite eras of the series ever, and it brought me my favorite iteration of the Doctor, so any sort of rumor that the Ponds will be returning has me excited because if the Ponds come back, so could Matt Smith’s Doctor.

The rumor began when Gillan was asked the following question on Instagram: “What projects are you working on at the minute? If you can tell us!”

In response, Gillan wrote, “Something unexpected. And it’s not a movie,” so it could be a television series and not related to her past work on Doctor Who. But if that is the case, then why would she then post a picture of herself and Arthur Darvill together writing “Went to London and saw Mr Pond” if it wasn’t somehow related? (I’m aware it doesn’t have to be related. Just let me have this theory.)

Give us Amy and Rory back in Doctor Who!

The Matt Smith era of Doctor Who is some of my favorite television ever. I loved how he embodied that character, and I loved watching as his Doctor grew throughout his tenure, a child and an old man all wrapped into one and gave us (in my opinion) one of the greatest regeneration speeches yet, as he said, “I will always remember when The Doctor was me.”

And while I do believe that once the show has said goodbye to a Doctor we should move on (yes, this is a dig at everyone who was so mean about Matt Smith’s era because they missed David Tennant), I do like the idea of the anniversary specials bringing us back the Doctors we’ve loved before and letting us catch back up with them.

Nothing is confirmed, and this is all just speculation, but man do I deserve a chance at seeing Amy, Rory, and the Doctor all together again.

Marple: Twelve New Stories
‘Don’t Worry Darling’ on Track to Clean Up at Box Office Despite Drama
San Sebastian Film Festival Winners: ‘The Kings Of The World’ Takes Golden Shell
Sylvester Stallone and Jennifer Flavin Working on Divorce Settlement, No Prenup
Strictly Come Dancing’s Will Mellor on devastating death of his dad and how it changed him forever