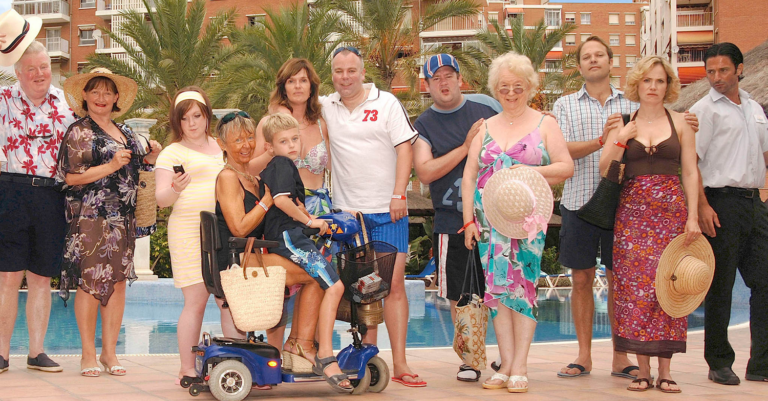 The cast of Benidorm are on Tipping Point Lucky Stars tonight (August 7) with host Ben Shephard.

The word conjures up images of a sunny resort in Spain for many.

But for TV viewers, it’s the classic series revolving around the guests at the Solana hotel.

The series aired from 2007 to 2018, when it was sadly axed amid falling ratings.

But what have the cast been up to since then?

Johnny made a big splash as Geoff Maltby (The Oracle) but he’s also done a lot since he checked out of the resort.

The 51-year-old regularly appears on QI and voiced the title character in children’s animated series The Rubbish World Of Dave Spud.

He also lent his vocals to a character in the 2018 Aardman Animations film Early Man.

Sheridan was already a star when she played Benidorm’s Brandy.

And she’s continued on that glittering path since then.

The actress has racked up meaty roles in the likes of The Moorside alongside more light-hearted shows like RuPaul’s Drag Race UK and she’s also been busy on stage in productions like Funny Girl and Joseph And The Amazing Technicolour Dreamcoat.

Sheridan, 41, has also become a mum since she was poolside, welcoming son Billy in 2020.

Tim, 70, already had quite the small-screen pedigree when he arrived in Benidorm, with shows like Auf, Wiedersehen, Pet to his name.

Since wrapping up the role of Les in the sun-soaked show, he has appeared in Still Open All Hours.

He also does a lot for the children’s charity, Children North East.

Now 52, the Swiss star appeared on the Benidorm Live tour and played the Genie in Aladdin in pantomime after Benidorm was axed.

He also appeared in Scarborough – the one-series wonder written by Benidorm’s Derren Litten.

The actor, who played Mick Garvey, had also been on a bright path, racking up showy roles in the likes of Death In Paradise and Killing Eve.

In 2019 he scooped the Best Male Comedy Performance BAFTA for Inside No. 9.

And last year he was nominated for Best Outstanding Comedy Actor at the National Comedy Awards for Stand Up To Cancer for his appearance in the comedy anthology series.

Siobhan has been a busy bee since her long stint as Janice Garvey.

She’s been in some really big shows, including Downton Abbey, Cold Feet and Doctor Who.

And the 56-year-old was nominated for a BAFTA for her performance in crime drama Happy Valley.

He has since performed in the Benidorm Live show and he has apparently been seen working as an ASDA delivery driver around Hull.

It seems the actor took the job to help boost his income amid the coronavirus lockdowns.

Kenny – who played swinger Donald Stewart in the ITV show – passed away in 2014.

The actor, who was 68 when he died, had been battling brain cancer.

His death was written into the series. Viewers were moved as his screen wife Jaqueline was seen scattering his ashes into the sea.

Some of the cast can be seen in Tipping Point: Lucky Stars at 7pm on ITV on Sunday (August 7).