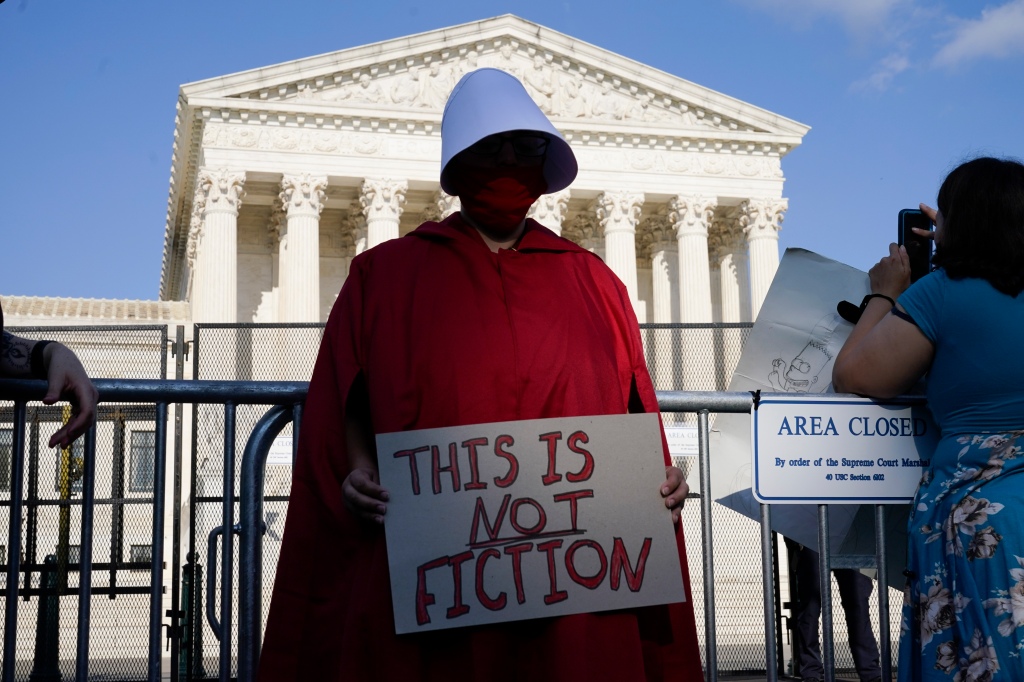 Hulu’s The Handmaid’s Tale was filming the last two episodes of its upcoming fifth season in Toronto on Friday when the U.S. Supreme Court overturned Roe v Wade in Washington D.C., stripping American women of their federal right to have an abortion. As protestors gathered outside the court building, some were wearing the Handmaid’s costume from the series, a familiar sight over the last couple of years as the outfit has become a symbol of women’s fight to protect their reproductive rights.

“We’ve said many times over a number of years we would love to be less relevant, but sadly, the show’s been hauntingly relevant. And today appears even more so,” Handmaid’s Tale executive producer Warren Littlefield said in an interview Friday night. “I think we all wish that we were this bizarre, dystopian, no-one-would-ever-believe-this concept. We all wish that we were a made-up graphic novel.”

Margaret Atwood wrote The Handmaid’s Tale more than a decade after Roe v Wade had become the law of the land as a dystopian novel that depicts a near-future New England as a patriarchal, totalitarian state — known as the Republic of Gilead — where women’s reproductive rights are suppressed.

Hulu set out to develop a TV series adaptation with writer Bruce Miller during Barak Obama’s second term as President, with Littlefield joining before Elisabeth Moss was cast to play the lead, June Osborne. The project was picked up straight-to-series in the spring of 2016 when there was no real threat to reproductive rights on the horizon.

In November 2016, the series was filming its first season. “We all stayed up very late the night of the election where we all felt we would be celebrating the ushering in of the first female president of the United States. We thought that [The Handmaid’s Tale] was still going to be relevant and important,” Littlefield recalled. “Then all of a sudden, [Donald] Trump was elected and the world shifted. When we went on the air [in April 2017], it was the start of the Trump administration.”

Over the past six years, leading to yesterday’s decision rendered by a conservative Supreme Court majority secured by Trump’s picks, there has been a string of state legislation that restricted abortion in places such as Georgia, Ohio and Texas. As women fought back, donning the Handmaid costume at protests became an image of the resistance.

“It’s a tremendous source of pride to see protests throughout the country — and also protests throughout the world — where women are putting on the Handmaid’s costume, the robe the bonnet, and we see it become a symbol of the fight for women’s freedom and women’s rights,” Littlefield said. “But today, I just feel tremendous sadness, anger and frustration because of who we are right now in America, and what this says. Over the past number of years we’ve seen throughout the planet the rise of the far right. Unfortunately, I think the United States stands the tallest, and with the rise of that movement, the continued restriction of women’s rights and freedom, and In that way, sadly, we’ve separated ourselves from many other nations that are experiencing the rise of the far right.”

Along with news photos of women taking to the streets in the Handmaid’s costume, images from the show have been circulating on social media, including character posters from Season 2 whose messages take on a eerily dark new meaning following the Supreme Court ruling.

In the upcoming fifth season, set to debut September 14, “we dip into how the right has seeped even into Canada, which has been treated previously as a very sacred place; we’re showing that Gilead rises there as well,” Littlefield said.

He doesn’t expect any last-minute tweaks in the last two episodes, which are currently being directed by series stars Bradley Whitford (Episode 9) and Moss (the season finale).

“I suspect there won’t be because we have a pretty powerful narrative. I mean, the series echoes what we’re living with today,” he said.

At the time of the interview, Littlefield had only been in touch with production staff in Toronto in the hours following the Roe v Wade news. “I have heard from a number of Canadians who work on the show that say ‘we are as saddened as you are, and we stand with you’,” he says. “So there’s been quite the connection where citizens of the world are shocked, dismayed and realize that our narrative drama is closer and closer to reality, and that’s wildly uncomfortable. But it also says to us that we are an important beacon, and so that’s our small part in this I guess.”

Is Friday’s ruling an incentive to keep The Handmaid’s Tale going with a sixth season?

“I think from day one the quest has been to have a powerful, dramatic narrative that, with June taking up the fight, we, as an audience, stand united with June, and June gives us hope. Well, she hasn’t given up and we can’t give up,” he said. “I think it’s a powerful, powerful message that despite all that June is up against in Gilead, there’s a ray of hope in her fight and determinism. I think that’s valuable and important, we are still relevant, and so long as Bruce and the writing staff feel there’s more to tell then that’s what we’re going to do.”

Speaking of hope, “today it’s very difficult to see it, I can’t say that that’s an emotion I felt today,” Littlefield admitted. “But I think that what’s critical is, we have to find it, and we can’t let go of it. So we have to mobilize, we have to realize what women are going to have to go through to find services that protect them, the distances they have to go. We’re going to have to build new infrastructure in the states where it’s supported, fight as hard as we can and support — financially, emotionally and with sweat. And so, today, it’s probably difficult to see any of those rays of light but we’ll uncover them. I think individually and collectively, that’s what we all must do.”

Ezra Miller Adds Burglary to Their List of Controversies
A$AP Rocky Sued Over Shooting, Former A$AP Mob Member Says He’s Victim
Marriage on BBC One: 6 questions we have after episode one of Sean Bean and Nicola Walker drama
Love Island USA: Feel Like You’re in the Hideaway With Pajamas, Robes, and Slippers From the Show
The CDC Basically Just Said You’re on Your Own Now