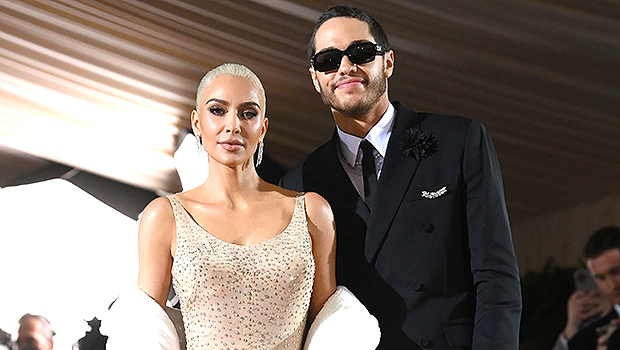 It’s no secret that Kim Kardashian, 41, and Pete Davidson, 28, are completely head over heels for each other. Possibly one of the biggest moves they could make aside from moving in together, which they have discussed, or getting hitched, is appearing on Hulu’s The Kardashians together. According to an insider close to the Kardashian family, the latter will happen in the show’s second season. “In the end, Pete knows that this level of exposure for his career cannot be bad. He controls the narrative in this instance, and he is only showing a loving side of himself that is authentic. He felt like, after all the mention of him in Season 1, he can’t just ghost out and always be this entity,” a source EXCLUSIVELY shared with HollywoodLife. “He is having fun doing this with her and they all know it is only going to make fans that much more interested in watching. It is a win-win situation.” They added that “Kim was absolutely on board with Pete agreeing” to be on the show.

The source also noted that Pete chose to be on the show and did not feel pressured to sign up, and a second insider close to the couple echoed the same sentiment. “Kim would never force Pete to do anything he doesn’t want to do. She took the same stance with Kanye [West] because she knew he didn’t want any part of being on the show,” they divulged to HL EXCLUSIVELY. “Being on the show was something Kim discussed with Pete but she never tried to persuade him or put any pressure on him at all. She really left that decision completely up to Pete.” The source also said Pete’s agreement to appear on The Kardashians was not a “decision he took lightly,” as he understands “putting your relationship out there in such a public way leaves it open for even more scrutiny.”

In April, a source close to the KarJenners confirmed Kim wanted her beau to be on the show, but wasn’t going to force anything on Pete. “Kim knows that Pete is not fully on board with appearing in season two and she also knows what people are saying about it to him,” the insider revealed to HollywoodLife. “Kim is leaving this decision up to Pete and continues to take the same stance on this; she’s not going to try and persuade him either way.”

Kim and Pete seem to be taking everything involving their progressing relationship seriously and don’t make a move until they have thought through it thoroughly. For instance, Kim waited until she was with Pete for six months before bringing him around her four kids, and even consulted several therapists plus her friends and family to help her decide when it was best to introduce them to the former Saturday Night Live comedian, per TMZ. Kim has two sons and two daughters with ex-husband, Kanye West, 44 — North, 9, Saint, 6, Chicago, 44and Psalm, 3.

The SKIMS founder and Pete struck up a romance in Oct. 2021 after she guest-starred on Saturday Night Live. They were then spotted riding a roller coaster together at California’s Knott’s Berry Farm. HollywoodLife confirmed their relationship in November. Pete accompanied Kim to the inaugural season premiere of The Kardashians on April 7, but did not pose on the carpet with her. They made their official red carpet debut at the White House Correspondent’s Dinner on April 30.