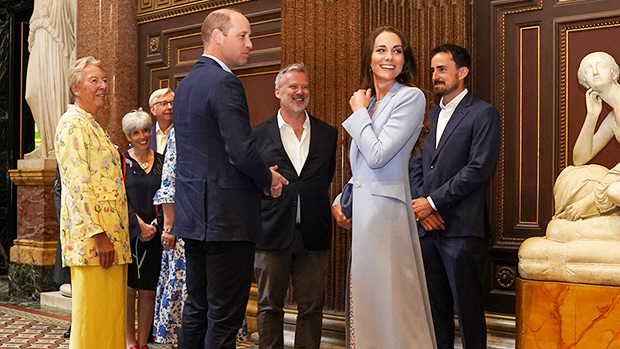 Prince William and Kate Middleton stunned both in real life and in their new joint portrait on display at the UK’s Fitzwilliam Museum. The Royal couple were spotted taking a look at the new piece by Jamie Coreth on Thursday, June 23. William, 40, and Kate, 40, both seemed very impressed by the portrait, which features a spot-on representation of both of them.

For the special unveiling, Kate looked gorgeous in a light periwinkle coat and gray high heels. William rocked a classic, dark blue suit for the occasion. In the portrait, William went for a similar dapper look with a blue tie, while his wife looked beautiful in a long green dress.

To celebrate the portrait’s debut, the couple also shared a photo of the picture and wrote just how excited they were for it to make its debut. “Delighted to see this new portrait unveiled at the Fitzwilliam Museum in Cambridge today!” they wrote on their social media accounts.

Prince William & Kate Middleton’s Family: Photos Of The Royals & Their Kids At The Platinum Jubilee & More

Now that the portrait is shown for public viewing, the artist has also spoken about what an honor it was to paint the Duke and Duchess of Cambridge. “A surreal and extraordinary experience to have had my painting of the Duke and Duchess of Cambridge unveiled today at the Fitzwilliam Museum in Cambridge. It has been the most extraordinary privilege of my life to be chosen to paint this picture,” Jamie Coreth wrote in an Instagram caption of the picture.

Besides their joint portrait making its debut, William and Kate also made a pretty big move earlier in June. The couple moved to Windsor to be closer to the prince’s grandmother Queen Elizabeth II, to spend more time with her. “She’s 96 years old, that’s not lost on anyone in the family, every moment with her is precious,” a source told HollywoodLife exclusively.