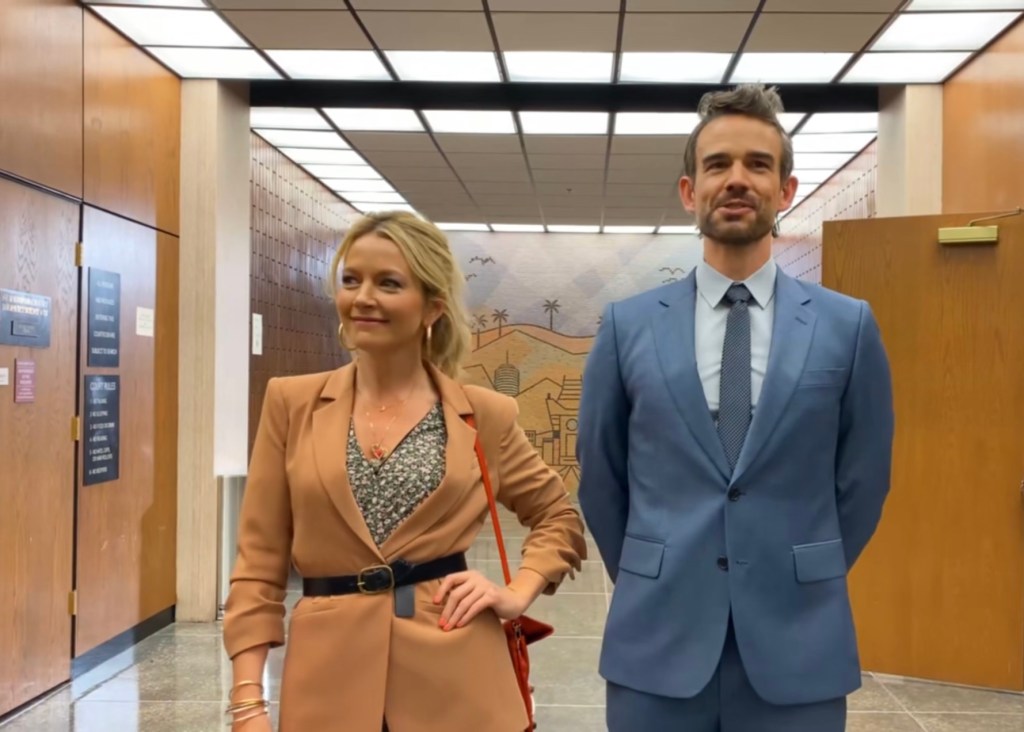 Chris Gorham and Becki Newton revived their Ugly Betty characters Henry Grubstick and Amanda Tanen, respectively, for a couple of silly skits while working on the set of their new series, Netflix’s The Lincoln Lawyer.

In a video exclusive to Deadline (above), Amanda has spotted a man who looks identical to Henry, Betty Suarez’s (America Ferrera) boyfriend. While in shock, she calls up her bestie Marc (Michael Urie) to dish about this mysterious guy.

“Marc, it’s me. I have something important to tell you,” she tells the person on the line. “Grubstick has a twin who is really hot. I just saw him and I’m going to text you pictures all day. Ok, stay tuned.”

Gorham laughs while thinking about making the videos with Newton, who he says is one of the costars he’s seen regularly since his time on Ugly Betty ended. Although the pair only had a few days where their schedules coincided while on The Lincoln Lawyer, they definitely had the past on their minds.

“I can’t remember when was the last time I saw Becki before The Lincoln Lawyer, but we always saw each other once every couple of years, at least,” Gorham tells Deadline. “I remember feeling really nervous when we were negotiating with the Netflix series because I thought the producers would put together that Becki and I had worked together before. I also worried they’d not give me the part because [my character] Trevor Elliot is so unlike Henry Grubstick. She was the first person I told after it was all done and it was really great to work with her again. She’s a total sweetheart.”

Newton wasn’t the only person in the cast of the Netflix series Gorham has previously worked with. In 1997, he appeared in four episodes of Party of Five alongside Neve Campbell, who portrays Maggy McPherson in The Lincoln Lawyer.

“When I did Party of Five, Neve and I shared some scenes but we didn’t really interact so we didn’t spend a lot of time together back then. I mostly worked with Jennifer Love Hewitt and Scott Wolf,” he shares. “This time around, we got to know each other better. She was so lovely and really sweet.”

Gorham’s role in The Lincoln Lawyer was pretty opposite to most of the characters he’s brought to life throughout his career. Trevor is a tech bro accused of killing his wife and her lover who ends up with a new attorney, Mickey Haller (Manuel Garcia Rulfo) after his first lawyer was murdered.

Spoiler Alert: If you haven’t finished watching the series, the following contains major plot points from the finale.

“When I got the first script, I didn’t know on that first read that he did it,” Gorham reveals. “Having done enough television, we work really hard in the first and second scenes to make him seem innocent and trustworthy. So I was pretty sure that he did do it, but I didn’t know right off the bat. In fact, after I got cast, it was one of the first questions that [executive producer] Ted [Humprey] asked me. I told him he probably did kill his wife, but that it is really important to plan so that the audience doesn’t know that. The way I did that was by deciding that despite the violence and all the other stuff, Trevor did love his wife. And that Mickey was right about him having become addicted to success, money, and the attention he got from taking credit for Lara’s breakthrough. It’s kind of tragic because the drug wins and it’s really not a happy ending for anybody.”

He added, “That cocktail party scene where Trevor finally takes off his mask and is such an asshole to Mickey was so great. It’s really fun to be the bad guy.”

The Lincoln Lawyer is available to stream in its entirety via Netflix.

Gorham’s second Ugly Betty skit with Becki Newton can be found below.

Newen Connect Strikes Deal With Topic For Quartet Of Thrillers From Italy, Sweden, The Netherlands & Denmark
Ms. Lauryn Hill Reunites With Wyclef Jean to Perform Fugees Songs at Essence Festival: Watch
Billie Eilish leads stress-relieving breathwork exercise at Glastonbury. Here’s how you can reap the benefits at home
Rainn Wilson Signs With Sugar23
Jill Duggar Baby Shower: Was She Ghosted by Her Own Sisters?