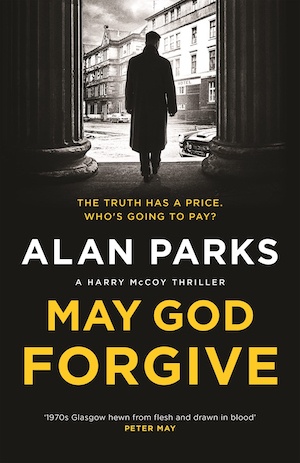 May is a good month for the Scottish crime fiction author Alan Parks. In 2022, it has seen him win the Edgar Award for Best Paperback Original for Bobby March Will Live Forever, alongside the launch of the latest book in his ‘months’ series, May God Forgive. The novels, which began with Bloody January, each feature a consecutive month in the title and the main character is Glasgow-based police detective Harry McCoy.

It is May 1974 as this gritty police procedural begins and following the bombs of The April Dead, McCoy has spent a few weeks in hospital with a bleeding ulcer. Still unwell but dying of boredom he checks himself out and reports for duty. On the way to the Sheriff’s Court, McCoy is caught up in an angry mob demanding the hanging of three youths arrested for burning down a hair salon and killing four women. One of them has been labelled a pyromaniac after a school fire, ergo they are guilty in the eyes of this crowd.

It’s chaos and the police are struggling to keep control. As the van with the suspects leaves the court it is sideswiped by a truck. In the confusion, three men in boiler suits and balaclavas run for the overturned police van and drag one of the injured suspects out while the other two follow behind. They all get into a black sedan and scarper before anyone can react. It’s an audacious rescue… or is it?

Before he can give his statement McCoy is sick in front of his colleagues. Murray, his boss, wants to send him home but McCoy practically begs and Murray relents. There’s anxiety across the city and it’s all hands on deck. While his colleagues deal with the salon arson and jailbreak, McCoy gets all the other jobs that come in. Of course, it won’t stop him interfering in the big investigation.

A body is found in the courtyard of a Salvation Army hostel for the homeless, and McCoy gets the call. Squeamish about blood, he avoids looking at the corpse. The manager found Alistair Drummond but can’t tell McCoy much about the new arrival. It’s only when talking to one of the other dossers that McCoy realises he knows the victim – Dirty Ally. The man had a long history in pornography, and likely wasn’t homeless. Cross tells McCoy that Ally jumped from the roof. So why was he in hiding and why kill himself?

Murray assumes there’s no case but McCoy thinks otherwise. While he’s pondering that another body turns up. A young girl has been murdered and dumped in a cemetery. All the police have to go on is a photograph of her and two boys. Everybody assumes she’s a prostitute but McCoy isn’t jumping to conclusions.

The temperature rises as the body of one of the salon suspects turns up on the doorstep of the mother of one of the murdered salon workers. This was a lynching, so a desperate search for the remaining two boys is launched to save their lives and bring them to proper justice.

May God Forgive is every bit as entertaining, gritty, darkly humorous and steeped in the grimy underbelly of Glasgow as the previous McCoy books. This is a go-to novel if you like historical crime fiction set in the near past. In a skillfully crafted plot the storylines coalesce. There’s much more going on in the city than the police realise, and the killing isn’t over.

Parks writes an intriguing cast of characters and keeps to a tight timeframe, which adds to the tension. 1970s Glasgow is superbly invoked – you can almost touch and smell it. It’s clear the author knows the streets, the dives and the people as well as anyone writing about them. The salon killings appear straightforward, we think we know what is going on, but there is no shortage of surprises and the story offers an original take.

McCoy, like all good detectives, is as driven as he is flawed but it’s a treat to spend time with him. His writing stylish and natural, Parks is a true heir of William McIlvanney. This is fast and hard, edgy and thought provoking, a truly gripping read. There may be another award on the way…

For an alternative take on 70s Glasgow try The Dark Remains by Ian Rankin and William McIlvanney.

Can Labor Activists Be Style Icons?
‘Delilah’s Maahra Hill To Star In NBC Pilot ‘The Irrational’ As OWN Series Has Ended
Naomi Judd Honored at Memorial Service 2 Weeks After Her Death
Batman ‘89 Official Print From Vice Press
“Bridgerton” Star Hannah Dodd Is a Dancer and Model, Too