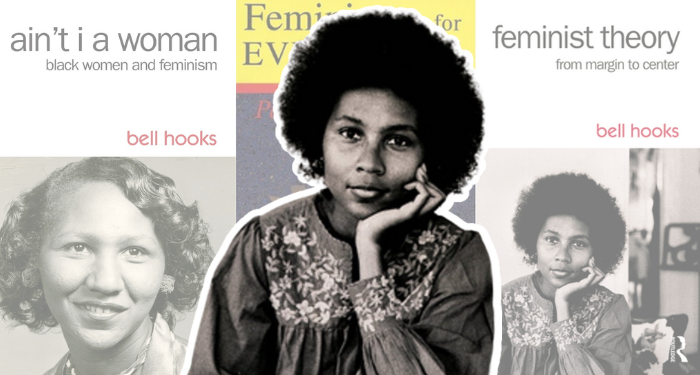 bell hooks was born in Hopkinsville, Kentucky in 1952. Her parents chose the name Gloria Jean Watkins for her, after her grandmother’s nickname of “Glory.” But when she began writing, she assumed the name bell hooks after the given name of her mother, grandmother, and great-grandmother; hooks removed the capitalization from her pseudonym to emphasize her message instead of her individuality, while also assuming a name that spans at least four generations. The intersection of individuality and community, clearly identifiable in both her given and pen names, would become a core theme of hooks’s work throughout her life. But, who was bell hooks?

As a self-identified country girl, hooks was educated in a racially segregated school despite the landmark U.S. Supreme Court ruling that found school segregation to be unconstitutional in Brown v. Board of Education in 1954. Kentucky was presented during her education as race-neutral and neither pro- nor anti-slavery, which led hooks to later describe the state as a “racial apartheid.” In the vein of community and individualism, in Belonging: A Culture of Place, hooks credits “the cultural ethos of the Kentucky backwoods, of the hillbilly country folk who were my ancestors and kin” for her self-determinism and dissident speech.

hooks began the work that would become her first book, Ain’t I a Woman: Black Women and Feminism, at age 19 while she was studying English Literature at Stanford University. She went on to complete a Masters and PhD in the same subject from the University of Wisconsin-Madison and the University of California, Santa Cruz, respectively. She spent her professional career teaching ethnic studies and English at many prestigious institutions, including Stanford University, Yale University, Oberlin College, and the City College of New York before returning to Berea College in Kentucky, where she founded The bell hooks Institute in 2014.

Book Deals Newsletter
Sign up for our Book Deals newsletter and get up to 80% off books you actually want to read.
Thank you for signing up! Keep an eye on your inbox.

Over the course of her life, hooks published over 30 works, all of which ask readers to question their understanding of how patriarchy, capitalism, and white supremacy intermingle. In 1989, Kimberlé Crenshaw coined the term “intersectionality” to explain this intermingling, and it is the understanding of this writer that hooks’s work falls directly under the umbrella of “intersectional thought.” To wit, the work most closely associated with hooks is Ain’t I a Woman: Black Women and Feminism, published in 1981. In it, she argues that the convergence of sexism and racism during slavery led to Black women having the lowest status in American society, and that their status has not changed substantially since then. She discusses the way the intersection of sexism and racism has imposed the Madonna/Whore dichotomy on women, with white women as the Madonna, and Black women as the over-sexualized whores; this stereotype persists into contemporary times, allowing the devaluation and rape — both literal and financial — of Black women. Specifically, Black women are required to do work that, for white women, would be considered non-gender conforming, which then is used against them when they are accused of emasculation.

Ain’t I a Woman is titled after the 1851 speech delivered by Sojourner Truth at the Women’s Convention in Akron, Ohio. The speech known as “Ain’t I a Woman” was originally published in the Anti-Slavery Bugle on July 21, 1851. However, the version best known — and the first one to incorporate the titular question — is one that was “recalled” in 1863 and heavily editorialized by Frances Dana Barker Gage, a white woman who presided over the 1851 Convention. Gage added the Southern accent, among other pieces not in the original transcription from 1851. Truth never lived in the South; she was born and raised in New York, and spoke only Jersey Dutch until she was 9 years old. It is highly unlikely that she spoke with a Southern accent, especially not the patois of an enslaved person from the South.

There is a deep irony behind hooks naming what would become her seminal work after a white woman’s appropriation of a Black woman’s words. It dovetails very neatly with her core thesis: that Black women have been overlooked and underserved by feminists, going back to the days of American slavery.

hooks’s 1984 work, Feminist Theory: From Margin to Center, is a further critique of second-wave feminism and its tendency to support white, middle class feminists but not anyone outside that group. The exclusion of anyone who is not a white middle class feminist, hooks argues, undermines the possibility of feminist solidarity across racial and class lines. It also promotes the marginalization of Black women in particular by ignoring the challenges they have faced that are not also experienced by white women.

Another key piece of hooks’s work is the “oppositional gaze,” which intersects with and is also separate from the male gaze. hooks coined the phrase in 1992 in the book Black Looks: Race and Representation when discussing how white filmmakers Other Black bodies by not allowing them to be presented as fully human. Black women in particular are presented as not allowed to “look” in film created by white people; the mere act of making eye contact is confrontational when it comes from the eyes of a Black woman. The way to oppose that Othering is by developing independent Black cinema. hooks is quick, however, to point out that Black cinema must also avoid the phallocentric gaze, which objectifies Black women in a way that upholds white supremacist ideology of the Black woman as the Whore in the Madonna/Whore dichotomy.

In addition to being a Black woman who was a scholar, writer, and professor, hooks also identified as “queer-pas-gay,” or “queer-not-gay.” In her own words, being queer was “not who you’re having sex with, but about being at odds with everything around it.” That is, a person who is queer has trouble fitting into a heteronormative paradigm; hooks adopted this definition from the work of philosopher and science writer Tim Dean, author of How We Became Human.

One of the driving beliefs behind hooks’s life and work is that “I am here. There’s nothing but love within me for the world around me.” This may feel surprising given hooks’s sharp criticism of patriarchy and white supremacy; however, what makes her criticism so poignant is the bedrock of deep love; it is her belief that we can do better when we challenge our held beliefs through a lens of caring for the world around us. As she said, “patriarchy has no gender,” and therefore Feminism is for Everybody.