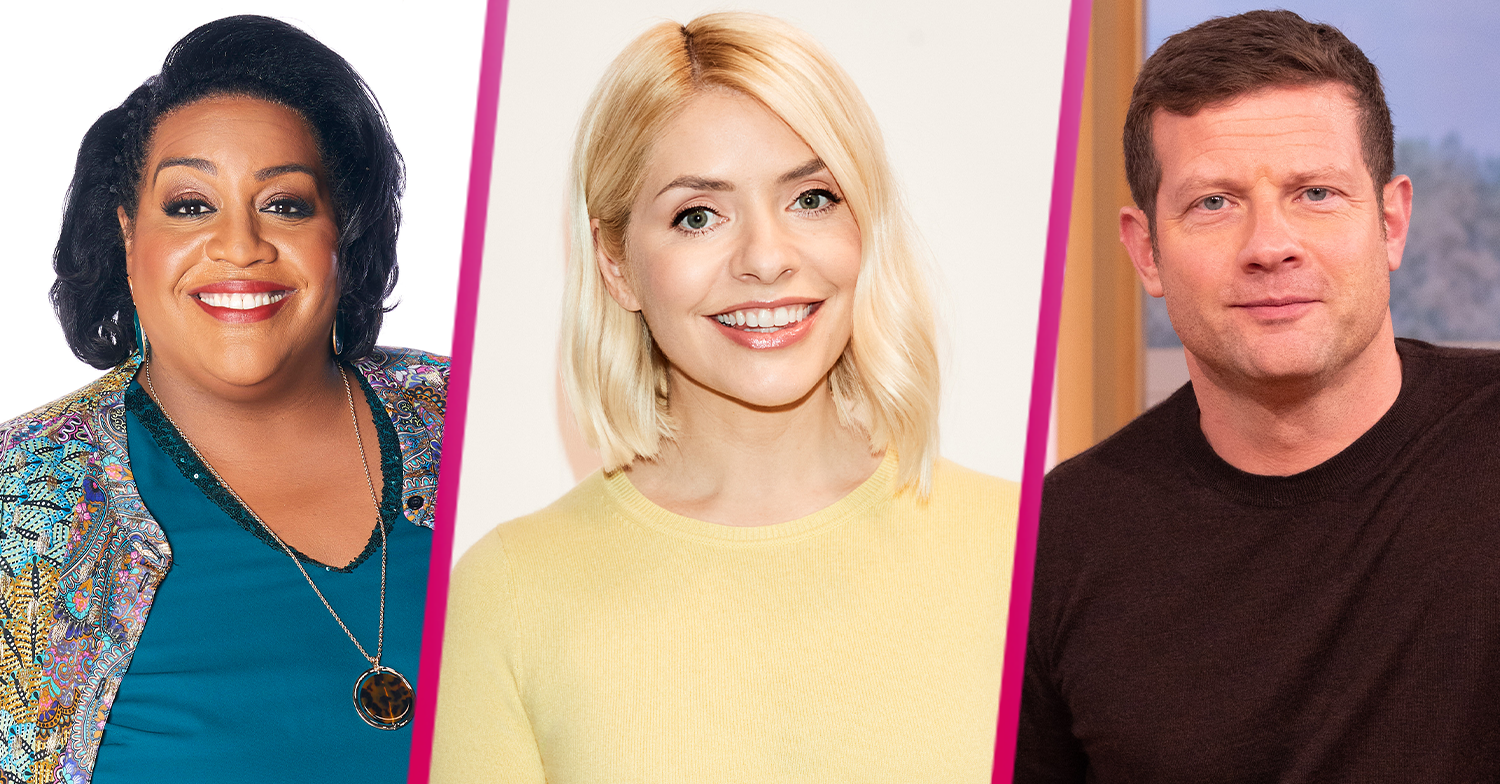 This Morning has been on our screens since 1988 – but who presents it, and which presenters have graced its sofa over the years?

Now in its 34th year on TV, This Morning has made household names out of its many presenters.

The hit daytime show airs weekdays from 10am till 12.30pm and explores leading new stories, debates and hot topics – with a smattering of showbiz thrown in for good measure.

Handing over to the Loose Women at 12.30pm, the show is typically watched by a million Brits every day.

But who presents This Morning? Read on and we’ll tell you all there is to know!

This Morning presenter Holly Willoughby joined the show in September 2009, taking over from Fern Britton.

She’d already been working with Phillip Schofield on Dancing On Ice since 2006, with the pair quickly becoming the most popular duo daytime TV.

Holly hosts the show alongside Phil Monday to Thursday, taking Fridays off.

However, Holly’s appointment to the show almost didn’t happen over bosses’ fears she “wouldn’t be able to interview the Prime Minister”.

Read more: Holly Willoughby taking leave of absence from This Morning – but why? And how long for?

Holly revealed on a podcast recently: “If it wasn’t for Phil, I wouldn’t be on This Morning now because everyone around him at the time when he suggested my name, were like: ‘What? No! She might be alright in the fashion bit but there’s no way she could interview the Prime Minister.’

“And I remember when I got the job and I totally only have him to thank for that and his belief.

Phillip Schofield is celebrating 20 years on the ITV daytime show this year, having joined as a full-time presenter 2002.

However, his first appearance as a presenter on the show actually took place back in 1998 alongside Caron Keating.

Read more: This Morning fans all make the same complaint about Phillip Schofield’s behaviour in Spin to Win

She left in 2009, with Holly joining in the autumn of the same year – and, if ITV didn’t sign Holly up, Phil has admitted he was ready to quit the show.

He has said: “We had such fun on Dancing on Ice that when the position became vacant on This Morning I said: ‘Holly is the only person I want. If I can’t have her I am not playing.’”

Who presents This Morning? Alison Hammond

Former Big Brother presenter Alison Hammond has been part of the This Morning family since 2003.

She joined the show as a showbiz reporter, interviewing the likes of Mariah Carey, Michael Bublé and The Rock.

In 2020, ITV announced that the show would undergo a presenting shake up, with Ruth Langsford and Eamonn Holmes dropped from their regular Friday hosting slot.

Alison and Dermot O’Leary were announced as the new hosts and started in January 2021.

However, Alison has revealed since that she almost turned down the job because she wasn’t sure she could commit to every Friday.

“I was like: ‘No, I’m not doing that. It’s massive. I’d done Fridays before with Rylan [Clark], but this was committing to every week. I kept thinking, what if I don’t want to do that Friday?” she told The Sun.

Alison added: “The whole time at This Morning I could say yes or no and I could get out of it, but now it’s ‘Fridays are your day’. It was daunting.”

The TV presenter also said: “I never dreamt that when I first joined This Morning – initially for a few months – that I would still be there 19 years later.

“I genuinely care about the show and the viewers who watch, so it’s a huge privilege and honour to be hosting a show I adore so much.

“I’m just really excited to be doing even more of what I love alongside the lovely Dermot.”

Dermot O’Leary first stepped in to host This Morning alongside Holly in January 2014, after Phil took a week off.

And, six years later he was back as the permanent host of Fridays on This Morning.

Replacing Eamonn and Ruth wasn’t something that came easily to Dermot, with the star admitting he was “caught between a rock and a hard place”.

However, signing up to the show, Dermot admitted that he was “thrilled and honoured” to be joining the team.

At the time, he said: “We have huge shoes to fill and we are well aware what a privilege it is to be stepping into them.

“Above all, we want to have fun and for you to be able to kick your weekend off with a smile, especially given the year we’ve all had.

“So I’m delighted to be co-hosting with the living embodiment of sunshine on a rainy day. I can’t wait to get started.”

Who presents This Morning? Josie Gibson

Big Brother star Josie Gibson is the latest addition to the This Morning hosting line-up.

She was drafted in at the last minute after Holly fell ill, covering alongside Phil for a few days.

Josie has since been back hosting the show alongside Dermot – and it’s fair to say she has gone down a storm with viewers.

In fact, many have called for Josie to be moved off the competition segments of the show and given a much bigger role in the show.

However, she recently told ED! in an exclusive interview that it’s actually not something she wants at the moment.

Josie said: “The thing is, I love where I am in life at the moment, and I love my career. Everything is so perfect, so I don’t feel like I want any more.

“I’m always doing stuff. I get the best of both worlds – sometimes I’m in the studio and sometimes I’m out and about and meeting people.

“I’ve got the best of everything.”

In August 2013, This Morning welcomed Rochelle and Marvin Humes to the family as regular stand-in presenters.

They no longer appear on screen together, but Rochelle has been a familiar face on the show since 2018.

She’s made regular appearances recently, including hosting alongside Phillip Schofield for two weeks while Holly took time out from the show.

Rochelle has also presented the show with Andi Peters and Vernon Kay, and she’s also fronted her own cooking segment on the show, too.

The lovely Ruth Langsford joined the show as a guest presenter in 1999 and she quickly transitioned into hosting the show alongside husband Eamonn Holmes on Fridays and over school half-terms.

However, it all came crashing down at the end of 2020 when it was announced This Morning would be undergoing a presenting shake up.

Eamonn and Ruth were axed as regular hosts of the Friday show, although both did stay on as stand-in presenters on the show.

However, Eamonn recently announced that he was quitting This Morning to join GB News.

So where does that leave Ruth?

She is, of course, a regular on Loose Women, and she has stayed on as a presenter on This Morning.

Speaking about Eamonn’s new role, she added: “He’s a total news junkie. I’m very proud of him. Yes, no more This Morning together – but it doesn’t mean there aren’t other projects we can do together.”

I’m A Celebrity favourite Vernon Kay was signed up to present the show for a week in August, covering for hosts Holly and Phil.

However, just days before he was due to present with Rochelle and Alison, he tested positive for COVID-19 and had to pull out of the job.

As a result, he made his This Morning debut some four months later.

Vernon fronted the show for four days in December 2021 – and he went down a storm with viewers.

In fact, some even called for Holly and Phil to “step aside” and let Vernon present the show full-time.

One fan said on social media: “This has been the best week on the show, time for Phillip and Holly to step aside. Well done you guys.”

Who presents This Morning? Andi Peters

Andi Peters graduated from the competitions slot to host of the show in September 2021.

He presented alongside Rochelle, with the TV veteran impressing viewers over the two-and-a-half-hour show.

This Morning fans called for Andi to be taken on as a permanent presenter, with one fan calling his presenting debut “brilliant”.

Another pleaded with ITV bosses: “Andi Peters has been fantastic. Give him the job full-time.”

Who presents This Morning? Familiar faces from yesteryear

Lots of presenters have helped shape the show over the years.

Of course, This Morning kicked off with Richard Madeley and Judy Finnigan as hosts in October 1988.

Caron Keating and Ross King hosted Fridays from 1998, with Fern Britton and John Leslie taking over that day the following year.

Coleen Nolan and Twiggy replaced Richard and Judy when they left, with Fern and John continuing to host Fridays.

John Leslie’s contract was terminated in the wake of Matthew Wright’s claims that he was allegedly the unnamed man who raped Ulrika Jonsson and he was replaced by Phillip Schofield.

John returned to the show as a guest in 2018 to discuss the sexual assault trial that had “ruined his life”.

Fern and Phil then hosted the show from October 2002 till her departure in 2009, when Holly joined the show.

This Morning is on ITV every weekday at 10am.

Quavo Dodges Questions About Offset, Migos Break-Up
18 Of The Best Men’s Khaki Pants To Complete Your Wardrobe (Updated 2022)
Elon Musk Says Twitter Deal Off Unless Company Shows Proof Of Fake Account Data; Stock Falls Some More
Health Officials Consider Mask Mandates As Covid Cases & Hospitalizations Surge
Coronation Street needs a new family… and this is what they need to be like and who should play them