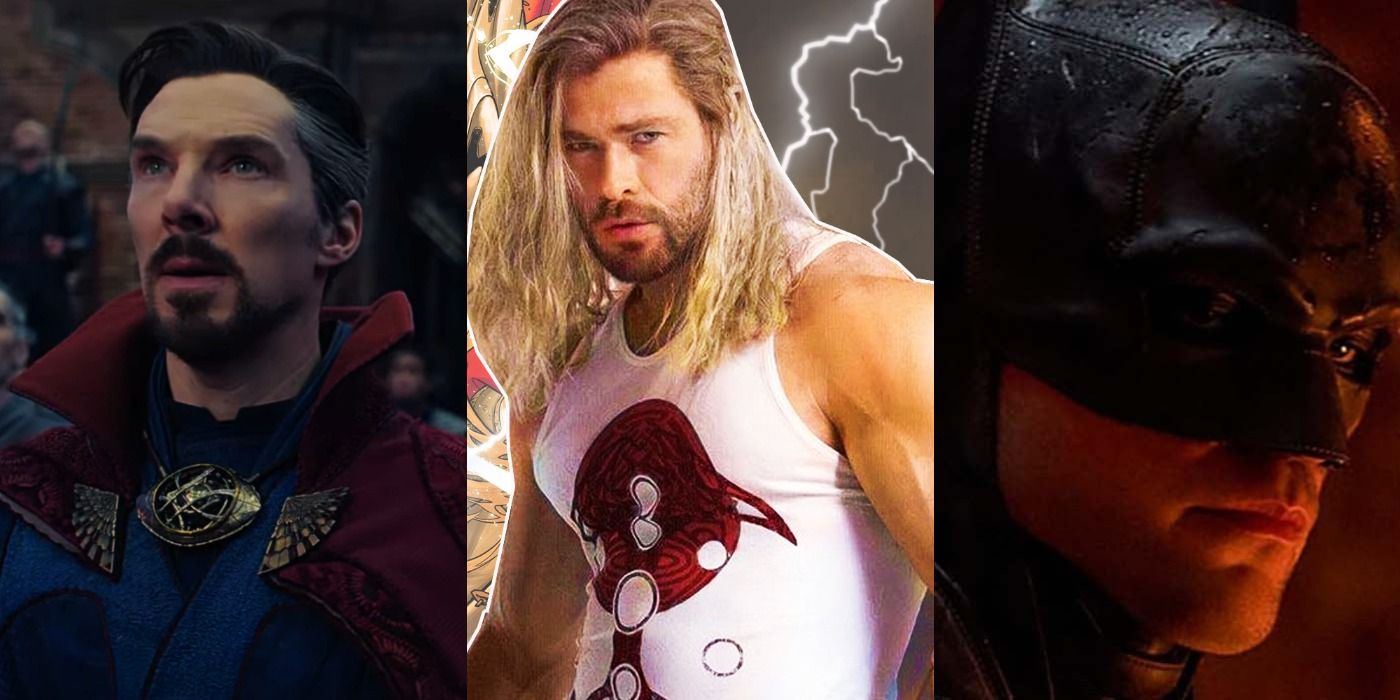 After many delays caused by the COVID-19 pandemic, quite a lot of superhero movies will be released in 2022. It includes properties released under the Marvel Cinematic Universe, DC Extended Universe, and some other banners in a variety of genres.

RELATED: The Most Anticipated TV Shows Of 2022, According To Reddit

Fans on Reddit are usually vocal about what films they are most excited about, with plenty of reasons behind why those particular movies have that stand out for them. With a lot of TV shows also joining the mix due to Disney+ and HBO Max accommodating them, it’s worth looking into the movies that will be released periodically through the year.

10 Aquaman And The Lost Kingdom

There are no shortages of likable protagonists played by Jason Momoa, although Aquaman might be his most popular. The second movie for the DC hero has many intrigued, with some like Redditor MaxiPackage commenting that they will “watch, but depends on trailers/reviews.”

That mentality makes sense since the story is still tightly under wraps other than the implication that a new part of Atlantis will be found. The first movie was a massive hit for the DCEU, becoming its highest-grossing movie, so it’s more than likely that the same blockbuster entertainment will be present in the follow-up.

9 The Guardians Of The Galaxy Holiday Special

There’s always a good blend of music, action, and powerful characters in Guardians of the Galaxy movies, which has enabled the 2022 holiday special to be as anticipated as full-length movies. Redditor 00wolfer00 is in it for aesthetic appeal, writing they “loved the soundtracks of the previous two, so hoping for another good mix.”

The special will be a TV film of about 45 minutes, but it is certain to have James Gunn’s trademark musical mix that the Guardians of the Galaxy have made popular. The story will carry the theme of Christmas and will bridge the gap with the third movie and the fallout from the battle against Thanos.

Redditor genericdude999 is one of many fans who want to give Morbius a chance because they feel it is “different from a standard vampire/werewolf/guy-turns-into-monster-sometimes plot.” Sony’s Spider-Man Universe has changed things up, making the superhero’s usual villains out to be heroes.

While DCEU fans continue to wonder if Jared Leto will get a solo Joker film, they can make do with this one where the actor is in the lead role as well. It looks to treat the character in more of a sympathetic light, which allows for enough intrigue for fans to see how the movie will pull it off.

Things have majorly changed from original plans for this movie ever since the sudden demise of the main star Chadwick Boseman. Redditor robojo124 voices out what everyone’s thinking, in that they want to see how the movie will “deal with the death of T’Challa and the intro of Namor.”

While the supervillain Namor hasn’t been confirmed to be in the film, many have speculated he might appear since the story will look into outreaches of Wakanda. Mainly, fans are curious how T’Challa’s absence will affect the plot, along with what the country has in store apart from what was seen in the first movie.

Team-up movies have always been The Rock’s forte, with several movie duos that Johnson has been a part of. However, this DCEU movie will be a departure for the actor, who will be seen in a villainous role. Redditor 00wolfer00 thinks it will be worth it because “The Rock has more hits than misses.”

The Rock has had a number of box office smash hits in the last decade, so it’s an easy bet that Black Adam will continue the trend. The story will set him up to be the nemesis of Shazam, with implications that he will later also challenge Superman. Fans are largely excited to see if the movie can shake things up for the DCEU going forward.

Redditor kayriss’ excitement is palpable as they claim that they are “foaming at the mouth to see Michael Keaton reprise Batman.” DCEU’s The Flash is set to introduce the multiverse to the franchise, which will see Michael Keaton’s Batman jump into this universe to become its primary Caped Crusader.

In addition, the story will look into Barry’s attempt to save his mother’s life and mark the return of Ezra Miller as the titular character after five years. The multiverse concept is always an easy draw for fans, which places The Flash in a prime position to be a game-changer.

4 Doctor Strange In The Multiverse Of Madness

Redditor Dapper-Property-7781 is excited that “Sam Raimi is returning to comic book movies after over a decade and the horror elements.” The director remains a popular figure due to the Spider-Man trilogy, which saw a revival within the MCU recently. The goodwill from that is certain to follow through in the MCU’s immediate multiversal film.

Doctor Strange will be traversing different realities when Baron Mordo will mess things up, with the implication that Strange will have to team up with an evil version of himself. With Raimi confirmed to be bringing his flair for horror into the movie, it could be the MCU’s most ambitious yet.

3 Spider-Man: Across The Spider-Verse

Pretty much everyone who wants to see this movie is riding on the incredible benchmark set by its predecessor, with Redditor ImpulsiveShotput set to watch because they “LOVED Into the Spiderverse.” The first entry surprised just about everyone to go on to win the Oscar for Best Animated Picture and expectations are sky-high now.

RELATED: 10 Fan Theories About Tom Holland’s Uncharted, According To Reddit

Early previews seem to indicate more of what viewers saw the first time, with Miles Morales again encountering different Spider-People from across the multiverse. With Spider-Man: No Way Home delivering a hit with the live-action Spider-Verse, the anticipation for the animated sequel has heated further.

Chris Hemsworth injected new life into his portrayal of Thor in the last few films and interest is significant to see how he develops. Redditor robojo124 shares these sentiments writing they “can’t wait for more Thor because (they) love this character.”

Thor has been a fan favorite for a long time, but he was last seen leaving to an unknown future after giving up the throne of Asgard. He is the first MCU hero to receive four solo movies and this one will feature things like how he leaves the Guardians of the Galaxy, along with Thor’s involvement in Jane Foster becoming worthy of Mjolnir.

Robert Pattinson’s debut as the Caped Crusader has everyone hyped, with Redditor Dapper-Property-7781 writing they think it looks “absolutely amazing from the cinematography to the score to the comic accuracy to the atmosphere.”

It will be an appropriately dark take on the DC character, as The Batman will go all-out with portraying Bruce Wayne’s inner darkness and the Dark Knight’s brutal ways in doling out justice. With superhero material largely becoming light in presentation, this one signals a shift that might just shake up the genre altogether.

NEXT: The 10 Best Netflix Original Series From 2021, Ranked By IMDb

Saim Cheeda is an entertainment writer covering all of Film, TV, Gaming and Books. He’s been a writer for Valnet since 2017, contributing 500+ articles for The Gamer, The Things, Game Rant, Comic Book Resources and Screen Rant. Apart from freelance writing, Saim is a lifestyle blogger, co-owning the blog 3 States Apart.

Virgil Abloh’s Louis Vuitton x Nike Air Force 1 Sneakers Set For Auction
Kate McKinnon Joins Ariana DeBose For ‘West Side Story’ Themed Opening Monologue On ‘SNL’
Dunbar to return in Ridley on ITV
Succession Star Has Walked Back His Comments About Johnny Depp Being ‘Overrated’
The best facial serums that really work to apply in your 20s, 30s and 40s