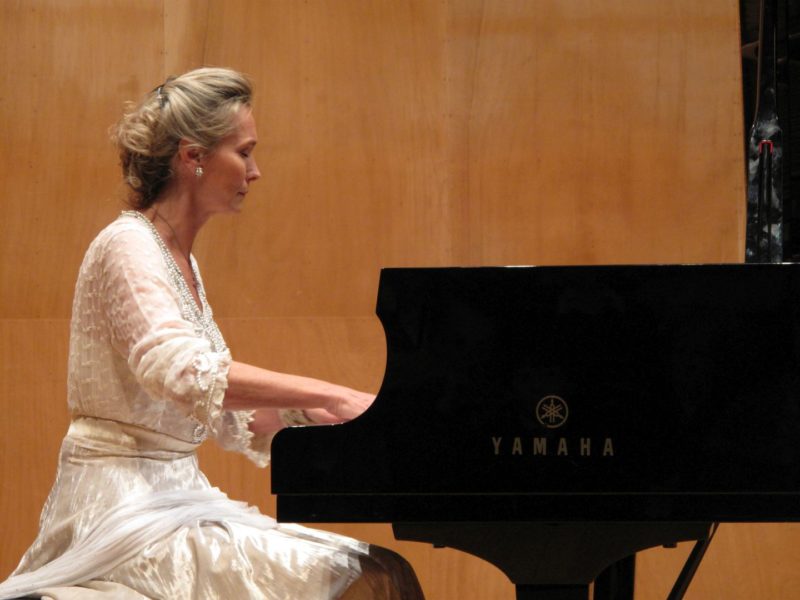 Frederic Chopin’s clout in the classical music community is considerable. The Polish-born pianist and composer, however, arguably doesn’t possess the same instant name recognition with even casual listeners that peers such as Mozart, Beethoven, and Bach command. French born classical virtuoso Elizabeth Sombart brings her interpretative powers to bear presenting some of Chopin’s most vital work to audiences.

She has tackled the composer before. She has explored Chopin’s Concertos on a past release, but this time out she’s delving into his Nocturnes. The twenty-one compositions included on Sombart’s album Singing the Nocturnes possess an immaculate sound and render Chopin’s vision with the same facility she’s demonstrated with other legendary composers. Her recent releases focusing on Beethoven received fulsome critical response and it’s difficult to imagine many dissenting from this new work.

The work begins in vigorous fashion. Four of the first five opuses in the Nocturnes are in major keys and Sombart does an excellent job navigating through several scattered bursts of energy. Chopin’s sense of construction is evident, however, with moves like opening the Nocturnes with a minor key composition. “Op. 9 No. 1 in B-Flat Minor” highlights the obvious lyrical qualities of Chopin’s writing while still emphasizing its key strength – melody. The sophistication is apparent while remaining accessible for a wide gamut of listeners and maintaining a dramatic mood.

Even the major key works have an introspective character. I take away a very meditative mood, occasionally playful, from pieces such as “Op. 9 No. 3 in B Major” and “Op. 15 No. 1 in F Major”, but there’s a deeper beauty there. Other listeners may arrive at very different conclusions. Sombart has a sure and conclusive touch present in each of the twenty-one pieces but it’s particularly evident when she picks up the pace. The varying tempo is especially effective as the Nocturnes progress towards its midway point.

“Op. 27 No. 2 in D-Flat Major” has an upward thrust for much of its first half before dramatically flexing its muscle in the composition’s second half. Sombart’s control as a pianist is impressive. “Op. 32 No. 2 in A-Flat Major” has a similar template, though a more pronounced sensitivity pervades and the second half escalation is less sustained. We return to more muted territory with “Op. 37 No. 1 in G Minor” and the delicately wrought musical architecture rates among the album’s zeniths.

“Op. 55 No. 1 in F Minor” is cut from similar cloth, but there are key variations. The playfulness near the performance’s end has ample nuance and the same attention to detail characterizes the piece overall. Chopin crafted these twenty-one compositions as bright and economical jewels – none of the tracks exceed eight minutes and the majority are shorter than six. “Op. 62 No. 2 in E Major” provides listeners with one of the more reflective moments during the release. It finishes as strong as it begins. Elizabeth Sombart’s Singing the Nocturnes is a sprawling and full-throated reminder of Chopin’s artistic genius and stands as one of the French pianist’s finest achievements.

19 garden bean bags to bring the Love Island villa to your back garden
Before These 22 Movies Hit the Big Screen in 2022, Read the Books They’re Based On
Taylor Hawkins Expressed Discomfort About Foo Fighters’ Tour Schedule Before He Died, Friends Claim
Kylie Jenner Changes Into Corset Top For Night Out In Vegas With Travis Scott After BBMAs
Days of Our Lives Round Table: Who Will Defeat the Devil?