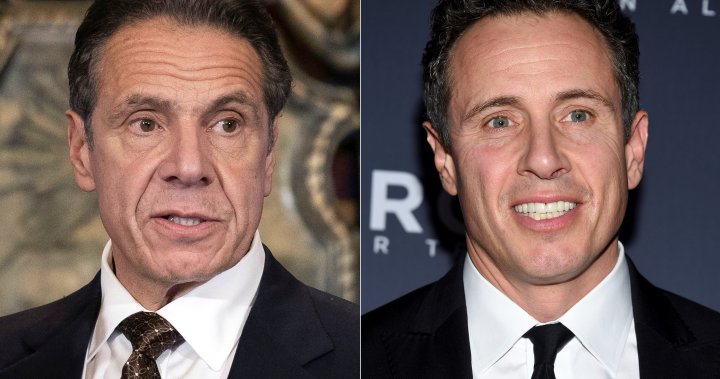 CNN announced Saturday that its most popular anchor Chris Cuomo has been terminated following revelations that he had aided his brother, former New York governor Andrew Cuomo, after he was accused of sexually harassing multiple women.

Chris was suspended earlier in the week after new information came to light of his involvement with his brother’s defence, leaving his future with the news organization up in the air.

Now CNN has said in a statement released Saturday afternoon that after retaining a “respected law firm to conduct the review,” Chris has been terminated, effective immediately.

“While in the process of that review, additional information has come to light,” CNN said. “Despite the termination, we will investigate as appropriate.”

Global News has contacted CNN for details on that additional information but did not hear back in the time of publication.

CNN chief Jeff Zucker told Cuomo of the decision Saturday and notified staff in an email.

“It goes without saying that these decisions are not easy, and there are a lot of complex factors involved,” Zucker’s email read.

On Twitter, Chris said that “this is not how I want my time at CNN to end.”

“I have already told you why and how I helped my brother,” he said. “As disappointing as this is, I could not be more proud of the team at Cuomo Prime Time and the work we did as CNN’s #1 show in the most competitive time slot.”

Andrew Cuomo resigned in August to avoid a likely impeachment after state Attorney General Letitia James’ office found that he had sexually harassed at least 11 women.

While Chris Cuomo had previously acknowledged giving advice to his brother, it was revealed Monday in newly released documents from the attorney general that he had pressed sources for more information on Andrew Cuomo’s accusers and reported back to the governor’s staff, and helped craft responses to charges.

“This is my brother, and I’m trying to help my brother through a situation where he told me he did nothing wrong,” Cuomo testified last July to investigators at the attorney general’s office.

Cuomo also admitted to reaching out to other journalists, including Ronan Farrow of the New Yorker, to see if they were writing stories about his brother and did not tell CNN.

After his brother’s resignation in August, Cuomo said on CNN that “I never made calls to the press about my brother’s situation.”

He has also said that he has done nothing to influence CNN’s coverage of his brother, although Andrew Cuomo appeared several times on his show during the COVID-19 pandemic.

After hearing about Cuomo’s consultations with his brother’s aides earlier this year, CNN said it was inappropriate but did not administer discipline.

The network said in a statement earlier this week following Cuomo’s suspension that it appreciates “the unique position he was in and understood his need to put family first and job second.”

Cuomo has been accused of sexual harassment himself by veteran TV executive Shelley Ross, who said he groped her at a party 16 years earlier while they both worked at ABC.

In response to the allegation, Cuomo said: “I apologized to her then, and I meant it.”

— with files from the Associated Press

Evan Rachel Wood Says Marilyn Manson “Essentially Raped” Her in 2007
Kelly McWilliams
Book Riot’s Deals of the Day for January 21, 2022
Cynthia Nixon Confirms Chris Noth Was Edited Out of And Just Like That Finale
Vegan beauty products we reckon are worth the switch, according to Team GLAMOUR