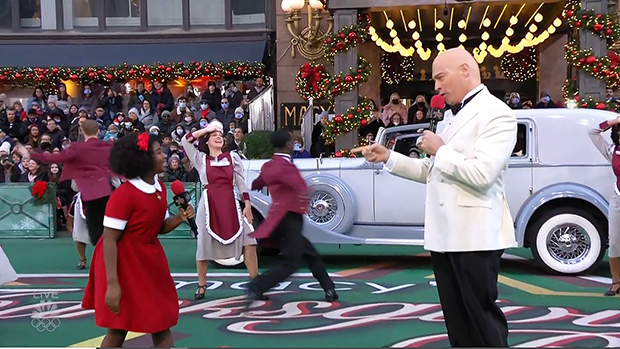 Harry Connick Jr. had us doing a double-take while performing during the Macy’s Thanksgiving Day Parade. He was completely bald playing Daddy Warbucks in his ‘Annie Live!’ performance.

Harry Connick Jr. helped kick off the Macy’s Thanksgiving Day Parade with an incredible performance alongside the cast of Annie Live! Harry was nearly unrecognizable as bald billionaire Daddy Warbucks in front of the Macy’s department store in New York City. The singer sported a bald cap to complete his Daddy Warbucks transformation.

Harry and Celina Smith, who will play Annie in the upcoming live musical event, performed an epic musical number for paradegoers and millions of viewers at home. They showed up in a fancy car and proceeded to show off their amazing vocals. Celina finished off the performance with a breathtaking version of “Tomorrow.” Celina is just 12 years old!

The former American Idol judge admitted that he may shave his head for the December 2 performance and not use a bald cap. “I haven’t made up my mind for the actual show,” he told Vanity Fair. “For the press photos, I had a bald cap on, but we’ll see what happens with the show. The problem is I have other things going on, and it’s kind of hard to do those things with a bald head. It takes so long for your hair to grow back. But we’ll see when it comes.”

Harry and Celina are starring alongside Taraji P. Henson, Nicole Scherzinger, and Megan Hilty in NBC’s Annie Live!, which will air on December 2. This live production of the award-winning musical follows in the footsteps of NBC’s past live musical events such as Grease Live!, Peter Pan Live!, and The Sound of Music Live!

The cast and crew have been working around the clock to get ready for the live performance. Jane Krakowski was initially cast as Lily St. Regis but was forced to drop out after getting diagnosed with a breakthrough cast of COVID-19. Megan stepped in just a few weeks before the December 2 performance. When it comes to live productions, the show must go on!