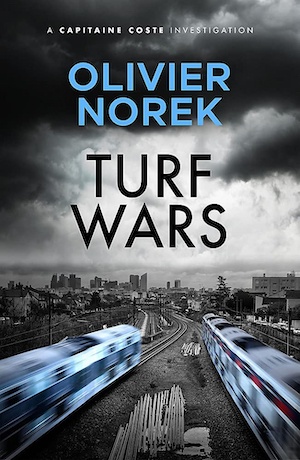 Translated by Nick Caistor — It’s been almost a year since we’ve reviewed the first of Olivier Norek’s The Lost and the Damned. The French author’s debut in English was one of our top crime fiction novels of 2020. The question is can he match that success with Turf Wars, the second in the highly acclaimed Banlieue trilogy?

Norek takes us back to Seine-Saint-Denis, a municipal area which includes a number of suburbs north of Paris, often referred to by its official administrative number – the 93. A working-class banlieue, the 93 has a reputation for high violent crime because of its close proximity to the capital. Malceny, the fictitious suburb where Turf Wars plays out, is the drug trafficking hub of the entire Ile-de-France region. Once the home of heavy industry, today Malceny is full of tower blocks and has a substantial immigrant population – it is more or less a ghetto of Paris.

As incorruptible as ever, Captaine Victor Coste is still head of Groupe Crime 1 and his team from SDPJ 93 functions like a well-oiled machine. They always have his back. Coste follows his own ethical code, which frequently lands him in hot water and makes him exceedingly unpopular with the likes of Capitaine Lara Jevric. The overweight head of Groupe Crime 2 always seems to turn up precisely when she’s not wanted and would do anything to advance her career. Fortunately, Coste is strong-willed and can’t be steamrolled easily, not even by Lara.

In The Lost and the Damned we saw Coste pining for Léa Marquant, the forensic pathologist. The two are now a couple, but Coste’s cagey behaviour and inability to deal with unfamiliar emotions doesn’t bode well for the new relationship. Léa has rented a cottage in the South of France for three weeks, suspiciously close to where her parents live. When she goes ahead by train, she expects him to join her soon, but Coste’s hesitancy to meet her parents and the following events prove her wrong. After all, Coste is dedicated to his job – he can’t go on holiday when a gang war has broken out.

This begins when 24-year-old gang leader Sayid Laouari is executed while under police surveillance. Then, Sasha Dimov is gunned down in a car park with his young son in the car and Karim Souki completes the trio of gang leaders brutally tortured and assassinated. The murders herald a shift in power in the drug dealing underworld, but are only a taste of what’s to come. There might be a new king in town, but the presiding queen – Mayor Vesperini –isn’t willing to give up her power so easily. She needs money to sustain her position and she knows only one way of getting it. Bribes and manipulation cost money and now that her pawns have been eliminated, she has to find more creative ways to win back control.

The Boss, the new drug kingpin, has his own way of conducting business and his three main henchmen, although they are mere children, have no scruples and won’t hesitate to kill on cue. At 13, Habibou is known as Bibz and comes from a life of violence, poverty and isolation. Bibz never thinks he’s gone too far which, combined with his impulsive nature, makes him the perfect, deadly assassin. Along with Colin and Driss, Bibz job is facilitating the handover of power among the minders – those who hold drugs, ammunition and money for safekeeping.

One of these is Monsieur Jacques Landernes, who has lived in the neighbourhood for many years, even after his wife passed away. It used to be safe here, but in time the burglaries, harassment, decay and senseless violence have forced all his neighbours to leave. Monsieur Landernes had to turn a blind eye to the crime and burnt-out cars. He felt lost among the different skin colours, customs, religions and languages. The only way to survive was to turn into a criminal himself.

Meanwhile an incident where a police officer confronts a woman wearing a burka provides the spark which pushes Malceny over the edge. But why would the police confront a woman at 11PM in the centre of a very difficult estate during Ramadan? Something doesn’t add up for Coste and his team. The town erupts into violence. Destruction, fires and looting follow during which people are warned to stay at home and lock their doors.

Once again Norek not only speaks from his own understanding as a detective in the 93, but he has also done his own investigating. In an interview with Marianne magazine he mentioned that to research the character of Vespertini he spoke to many elected officials of Seine-Saint who told him about their experiences. It’s details such as this, rooting Norek’s books firmly in the reality of today’s Paris, that make him a compelling writer. It also makes for unsettlingly realistic reading.

Even though we as readers may never experience the conditions or understand the conditions in France’s poor communities (or most other countries, for that matter) Norek brings us as close as we can get. He doesn’t treat us with kid gloves. Sentences reek of burnt rubber, poverty and despair, punctuated by brief, scarce moments of dark, gallows humour. It’s fast-paced and visual. It should be, it’s written by a seasoned scriptwriter. One who doesn’t shy away from graphic depictions of violence, yet he does it in a way that feels justified and not one iota gratuitous.

In Turf Wars, Seine-Saint-Denis and its inhabitants take a starring role, whether it’s those on the right or wrong side of the law. Norek doesn’t disappoint. He knows how to write a strong plotline and how much of his characters’ personality or history should be revealed. Turf Wars is a worthy follow-up to its predecessor and if his track record so far is anything to go by, the last will be even better.

Cinema Trends From The Middle East Are Worth Watching
You Won’t Believe How Many Incredibly Cute Moments Ciara and Russell Wilson Have Together
‘Condemned: Criminal Origins’ Still Hits Like a Lead Pipe to the Skull [Safe Room Podcast]
Brody Dalle Sentenced to Community Service in Custody Dispute With Josh Homme
Fans frenzy over Tim Hortons’ newly dropped Justin Bieber merchandise