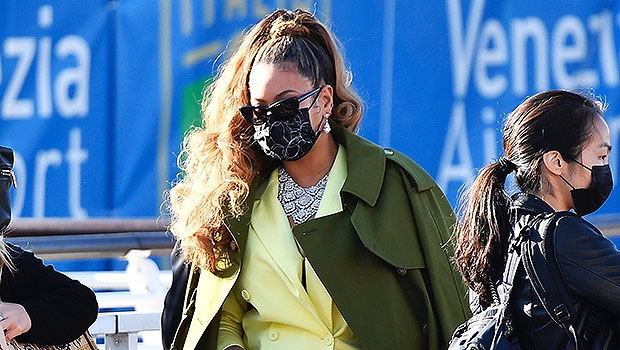 Airport but make it fashion. Beyoncé rocked an ’80s inspired ensemble with a pearl bag as Jay Z walked behind her in a black-and-white bucket hat on Oct. 17.

Beyonce, 40, and Jay-Z, 51, jetted out of Venice, Italy in style. The “Halo” singer turned heads in a light yellow suit, consisting of a slightly oversized blazer and tapered dress pant as she headed to the airport on Sunday, Oct. 17. The look was all ’80s, as she paired the canary colored set with a patent leather power pump and pastel green purse made of pearls.

The Houston native finished her outfit with a dramatic bib style necklace — similar to the one she wore with her black-and-green plunging gown — as well as a pair of sunglasses and a protective face mask. Queen Bey added some serious volume to her half pony-tail hair style, which included gorgeous, cascading curls.

Jay-Z could be seen walking slightly behind his wife of 13 years in an eye catching black-and-white bucket hat. He kept the rest of his look low key black bomber and pants, as well as a fresh pair of white sneakers. Several assistants could be seen walking with them, holding a $3,000 Louis Vuitton On-The-Go tote, box with ribbon handle and a second tote filled with items (notably, only Beyoncé’s red colored iPhone appeared to be peaking out of her small purse).

The A-List couple were in Italy for the ultra-exclusive nuptials of Alexander Arnault — son of LVMH chairman Bernard Arnault, who is worth 185.4 billion — and D’Estree founder Geraldine Guiotte. Alexander also works in the family business, serving as EVP of Tiffany & Co. which LVMH acquired in 2019 for a whopping $16.2 billion. The couple were seen holding hands as they arrived to the affair, with Bey bundling up in a black button down coat over a low cut blue dress.

Beyoncé and Jay-Z recently appeared in the companies’ splashy “About Love” campaign, inspired by the iconic film Breakfast At Tiffanys. In the photos and accompanying film, Bey made history as the fourth woman ever to wear the one and only “Tiffany Diamond’ — the yellow stone also sported by Audrey Hepburn in the Breakfast At Tiffanys posters (Lady Gaga last wore the stone at the Oscars in 2019).

The pair were in good company at the wedding of Alexander and Geraldine, who also had Kanye West as an attendee and performer. The Chicago native took the stage in an all-black Balenciaga ensemble, including a custom face mask, per TMZ.