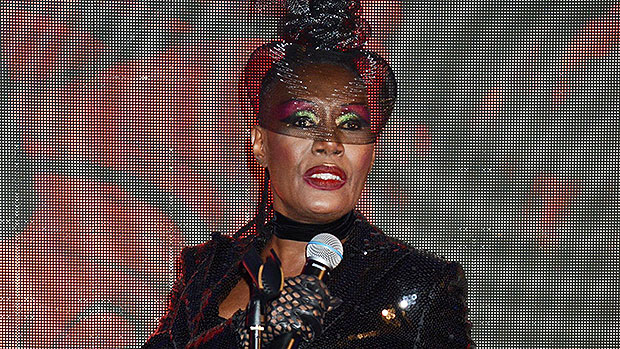 Grace Jones showcased her toned figure in a sexy bodysuit while on stage at Icon Ball during London Fashion Week — see the photos here!

Grace Jones, 73, stole the show in a jaw-dropping bodysuit (which she’s gloriously done before) while on stage at the Icon Ball during London Fashion Week on Friday, Sept. 17. The hitmaker’s black sequined ensemble was one-of-a-kind and the star-studded audience at the Landmark Hotel appeared to love it.

The full outfit consisted of a tight black corset paired with a long black sequined coat and a feathered headpiece. Like we said, Grace Jones made sure she was the center of attention during her time on stage and the outfit helped her accomplish that.

The sexy performance comes after Grace Jones reportedly stepped away from her role in the new James Bond movie, No Time To Die. In 2019, it was rumored that the singer would make a cameo in the new film, 34 years after she appeared alongside Roger Moore in A View To A Kill. It’s not clear why she walked away from the role and the chance to return to the long-running franchise, but according to the The Sun, Grace wasn’t happy with the script.

“Bosses were really excited about landing her. Of course, she comes with a reputation, so they organized premium accommodation and rolled out the red carpet on set to make her feel welcome,” a source previously told The Sun. “But it turns out Grace was expecting to play a bigger role in the movie and took her brief cameo as a slight.”

It’s a shame Grace Jones won’t appear in the new James Bond movie, but at least she’s still performing and fans get to enjoy her talents on stage.