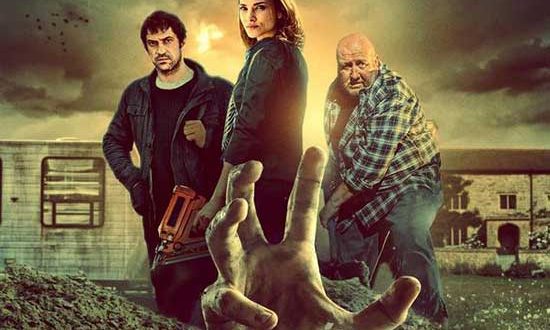 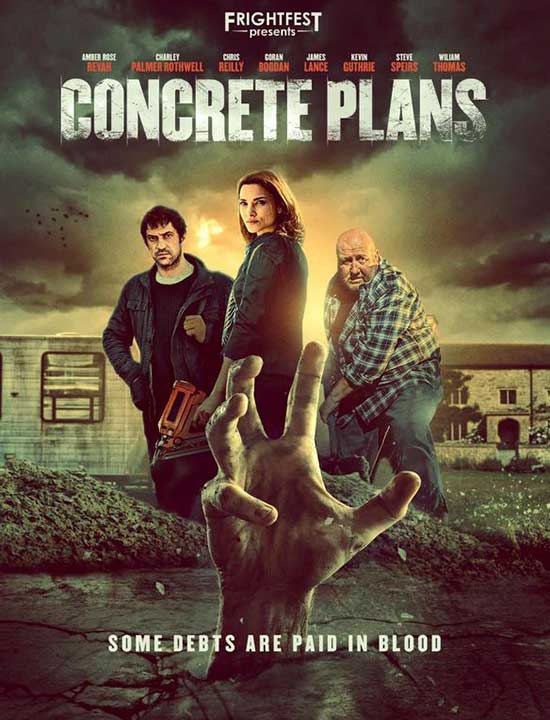 A motley gang of builders take on a remote farmhouse renovation, only to be ripped off by the aristocratic owner, causing events to spin badly out of control…

Take a group of rough, blue-collar builders from different places, isolate them in a country estate to do massive renovation work on a tight schedule, pit against an elitist ex-military snob who is in a massive financial bind due to taxes on his inheritancAe, and mix well.

“Concrete Plans” is not a horror film, so don’t go into it expecting scares. If you are into blood, then you might be interested as there is quite a bit of it throughout the film. In fact, the opening scene is bloody.

Maybe you want something that buildings to a breaking point, and then you get to watch as all the pieces fall. Here you go.

Your primary focus is on a group of workers to do work on some old country buildings. As we watch, we find the boss is out on a limb with this job and needs it to pay off. His right-hand guy turns out to be involved in some serious shady dealings. The immigrant worker has a secret stash and a young daughter he needs to send his earnings to. Plus, an old gent who is probably working one of his last jobs, but he knows no other life. And finally, the boss’s nephew who freaks at the thought of being isolated for 3 months for work.

You meet the property owner, Simon, who is the poster boy of wealth-entitled jerks. He is obsessive, overly fastidious, arrogant, and having a bad run of luck trying to get his hands on the family inheritance. To the tune of his advisor telling him to cancel the renovations as there will be no money to pay if a new deal does not go through. If the tax people get involved, his entire world could be seized by the courts. His military frame of thought refuses to except defeat, and moves forward with his plans.

Things take a nasty turn as the workers realize they are getting more excuses than money from their employer.

Every character is given a story arc, even if it is a fairly short one stuffed in amongst the rest. Making the characters as real as possible is important for the major developments later. The entire first half of the film is character driven as these odd little plot points are set up. The only awkward bit is a somewhat forced attraction between the immigrant Viktor and Simon’s fiancé.

The entire film has a dark, oppressive look and feel to it. While the countryside may be beautiful, you soon notice that you see less and less of it as the camera zeroes in further and further into the characters and their choices. In fact, the film starts with a shot of the countryside, then the camera drops straight down on the estate. It feels like one of those education films where the camera keeps zooming in further and further until you see the molecules.

There is call for comparison with the work of the Coen Brothers. Diverse characters with their own stories that, oddly, intersect with others, and everything changes direction for everyone. Close in tone to “Blood Simple” but without the underlying pitch-black humor. Same tight direction and excellent performances you get with Coen Brothers films.

No major issues with “Concrete Plans”. There is the slightly forced attraction, as mentioned. If you have problems following British, Welsh, Scottish, and/or Irish accents, you will want to try to find a copy with subtitles. The accents are thick on some of the characters and when blended with colloquialisms and idioms Americans aren’t familiar with, you can lose a bit of the detail, but the main points are perfectly clear.

As long as the viewer goes in knowing “Concrete Plans” is not a horror film, I think anyone looking for a fast, dark tale of people making bad choices while refusing to change course will be quite satisfied. Just be careful which characters you chose to invest a lot of empathy with; you may be disappointed.

Hero Nation: ‘Halloween Kills’ Star Jamie Lee Curtis On Sequel’s Statement About Mob Violence; Update On ‘Scream Queens’
Have you ever become close to someone with a dark triad personality? Here’s what you need to know about the mysterious personality sub-type
Hannah Gadsby Blasts Netflix Honcho and Dave Chappelle
See Penn Badgley React After You Fan Asks Him to “Kidnap Me”
Mother/Android First Look: A Pregnant Woman vs. the Robopocalypse