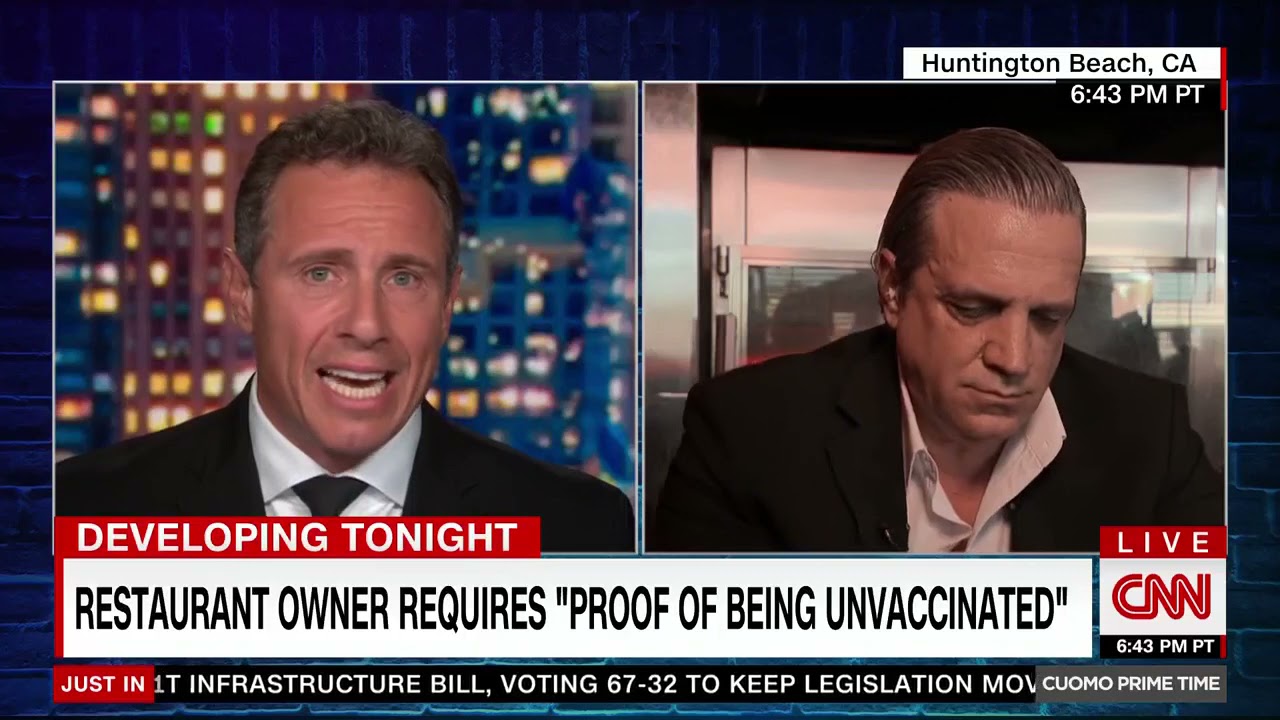 Earlier this week, a restaurant in Huntington Beach, California was getting attention after the owner put a sign on the door stating proof of being “unvaccinated” is required for entry.

what the hell is “proof of being unvaccinated”? a hospital bill? https://t.co/A2rI4FNsfq

This is pretty clearly just meant to make a statement, since there’s no actual way to prove you haven’t gotten the vaccine. But a message posted to the restaurant’s social media pages stated that there are actually some anti-safety measures in place.

“So to be clear, if you enter the restaurant for dine in, and want to wear a mask, you must remove it when sitting down,” the message reads. “If you are standing around inside and waiting for a table, or waiting inside to pick up food for yourself or as a third party delivery driver, and you are wearing a mask, you will be asked to wait outside.”

Now Tony Roman, the owner of Basilico’s Pasta e Vino, is making the cable news rounds, and it is … weird.

First, Roman went on Chris Cuomo’s show on CNN. When asked if his anti-mask campaign is just a publicity stunt, Roman replied, “It’s an IQ test.”

“Like I say to people when they ask me, if they’re so blinded with their rage and their hate,” he continued. “I tell them, you know what? If you still don’t understand it, maybe we should put a sign up that says you’re too stupid to come into the restaurant. I mean, it’s very simple. Just like I said, I think you figured it out. Am I right?”

It’s hard to tell if he’s right seeing as none of that made any sort of sense whatsoever, but I’m going to guess that no, he’s not right.

“I don’t even know what you’re saying right now,” Cuomo told him.

When Cuomo asked Roman if he or any of his family is vaccinated, the restaurant owner asked if Cuomo would answer the same question. Cuomo immediately said that yes, he is vaccinated and so is his family. Roman replied, “You were hesitant,” even though Cuomo very much was not.

I’m sure Cuomo is just devastated to hear that.

Following his appearance on CNN, Roman then went on Fox News to brag about how well he did.

Have you ever seen someone brag about an interview that was cringe? pic.twitter.com/AMvnva3IZK

The absolute cherry on top of all of this nonsense is that while railing against masks and the vaccine, Roman was also happy to take $57,738 in funds from the government’s Paycheck Protection Program.

When the OC Register reached out to Roman for comment, he replied, “PPP? It’s our money, not theirs! Don’t let them tax you and then use your money to build a war chest, so they can fund programs to advance and enforce tyrannical mandates and restrictions against you!”

OK, sure. (via HuffPost)

the outpouring love & support I’ve received has made me realize I’m more than my accomplishments and gymnastics which I never truly believed before. 🤍

‘Jackass’ Star ‘Goddess’ Patty Perez Dead at 57
What happened to Gabby Petito? Everything you need to know about the shocking news story everyone is talking about
The Real Housewives of New York City Reunion CANCELED. Will the Show Be Next?
Netflix buys author Roald Dahl’s entire catalogue of works
How This Parisian Fashion Insider Gears Up for ‘La Rentrée’ Into Fall Style