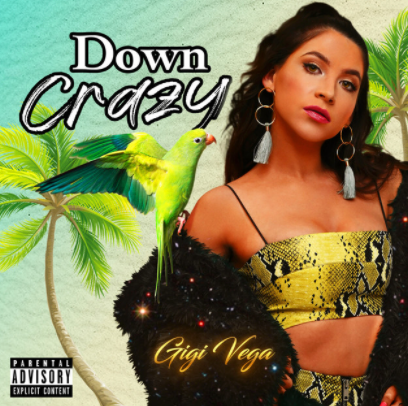 As much as a beat can convey on its own, big rhythm tends to respond even more to a powerhouse vocal than it does something on the softer side, and it’s hard to argue with that in the new single “Down Crazy” by Gigi Vega. Stylistically resembling hip-hop’s poppier side whilst borrowing melodic frills from an evenhanded R&B we’re seeing even more of in the 2020s than we did the 2010s, “Down Crazy” isn’t aesthetically adventurous so much as it’s unashamedly hook-driven and poetic. These verses aren’t on the backburner in favor of spotlighting a club-oriented groove; this is collectively expressive and wholly tantalizing, just as all top-shelf pop music ideally should be.

Vega’s vocal is striking and her panache is certainly welcome. She isn’t afraid to go after a cathartic release well ahead of the climax in this single, and her nimble movement through the verses never feels anxious so much as it does urgent and sensuously well-timed with the bassline. The muscle is undeniable here, and she’s flexing all over the competition in a big way.

This master mix is so tight that there’s really no room for the vocal element to breathe, but I think this was entirely deliberate on the part of producers. To create as potent a melodic backdrop as possible, the instruments have to be on top of the singing, posturing the effectiveness of the lyrics and making us feel like this singer and her beat are one joint force to be reckoned with. It’s an ambitious scheme, but one that doesn’t sound impossibly difficult when you’ve got someone as good as Gigi Vega in the booth.

The vocal delivery in this single is seamless, and if you’ve been listening to “Watchu Tryna Do?” and “4 The Birds” this summer, I think you’re going to notice how much Vega has grown in this performance. She is so confident in her harmonies and sounding more sure of herself and the statements she’s putting out behind the mic, and while she didn’t need to prove anything to me after the release of her last song, this undeniably adds to the reputation she’s been cultivating since dropping her debut. It’s a steady and meteoric ascent, and I don’t see the trajectory changing so long as she doesn’t alter this formula.

“Down Crazy” is a streamlined pop treat from an increasingly evocative voice in Gigi Vega that I can’t get enough of this July. The instrumental componentry in this piece is captivating, but the singer herself is what makes the hook so impossible to turn away from, regardless of how many times you’ve played it through. She could turn this into a stage-rocking staple of her live shows, and if it’s presenting us with any sort of a template for what her next project is going to sound like, the critical acclaim is only going to expand.