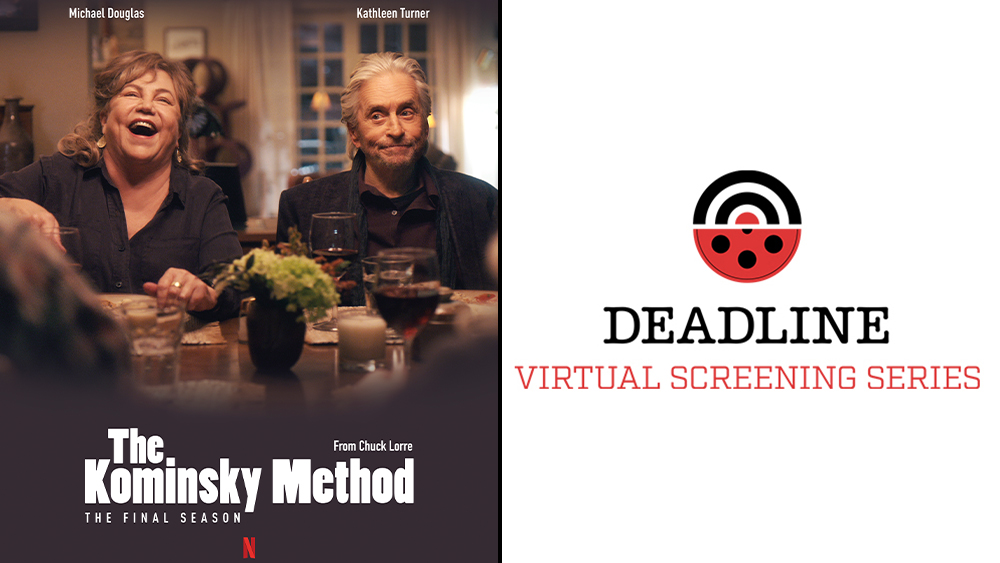 Michael Douglas, Kathleen Turner, and Paul Reiser all joined me last night for Deadline’s Virtual Screening Series where we had a lively (to say the least)  and at times out of control conversation about the third and final season of their Netflix comedy series The Kominsky Method from creator Chuck Lorre.  If  you want to have a good time watch all of it at the link above as it proves you never know what can happen when you get this trio together. We are presenting it just as it happened just for the fun of it. The series has been routinely nominated for Emmy awards in its first two seasons in which Douglas stars as Sandy, an aging acting teacher and Alan Arkin co-starred as his cranky agent friend Norman Newlander. In fact it is the only one of last season’s eight Best Comedy Series nominees that has the opportunity to return again this year, and indeed it deserves to  Arkin didn’t want to continue with another season so they kill off Norman in a hilarious and touching funeral sequence that launches the first episode of season three.  We talk about that and especially the reteaming of Douglas and Turner, so memorably on screen in Romancing The Stone, The Jewel Of The Nile, and War Of The Roses. After a brief appearance last season Turner came in as Sandy’s ex-wife Roz to fill the void left by Arkin, and the chemistry is once again palpable.  Originally Kominsky was a two-season deal but Douglas had other thoughts.

“It was an original 2-year commitment contract with Netflix and then they all said thank you very much and I said ‘this is fun, this is good, and we haven’t tied it all together’, so I kind of pushed for this third season,” he said.  “Alan is a few years older than me. It’s tough doing these shows anyway moving as quickly as we did, so I think two seasons was fine for him and he bowed out and then I need to thank Netflix and Warner’s Television and Chuck Lorre, who said okay, yeah, let’s do a third season because Chuck wrote all of them and we had just a wonderful time. Kathleen came back, which was fantastic and developed a wonderful performance. Paul continued doing his incredible Martin, and you know we had a good year and I just felt good about it because after those first two seasons I just wanted to put a bow around it… I’ve been just tickled pink with the kind of response that we’ve gotten. I was a little nervous about doing it without Alan and the response has been very, very positive and I enjoyed a lot of it.”

For Turner the reunion was pure gold, but she asked for and got assurances that Lorre would continue to write every one of the six episodes that comprise the final season. I compared their pairing to Tracy and Hepburn, and she has an idea why their teaming continues to work after all this time. “I think it really started through the hardships of Romancing. I mean that was no piece of cake, man. I mean, I think I walked out of that with at least seven stitches, but at the same time, my God, it was an adventure and you know there was no time to muck about. We just threw ourselves into it and that sort of breaks down all the barriers I guess and we have never lost that…that feeling of each other, which is lovely,” she said.

Reiser came into the show in season two as the romantic interest of Sandy’s much younger daughter immediately fit in right away, especially with his startling look and unique hairstyle. “That was a little glimpse of my future. My first meeting with Chuck he said we’re going to age you and we’re going to give you a bald cap, and we’re going to pad you up and we’re going to give you a ponytail, which I thought was a brilliant idea and then I had these terrific craftsmen who came in and it was a long thing every morning but it really (worked), ” he said. “You know what, the great thing about those wigs is it does half the acting for you so you know you walk in and people already go, ‘yeah, I get this guy’. I had never done that kind of work before…  It was a lot of fun. It’s a fun character too. He’s just sort of so oblivious and good spirited. Chuck wrote this so beautifully and thoroughly and everything was thought out.”

Check out our entire conversation – and the unexpected interruptions – at the link above.  All three seasons of The Kominsky Method are currently streaming on Netflix.