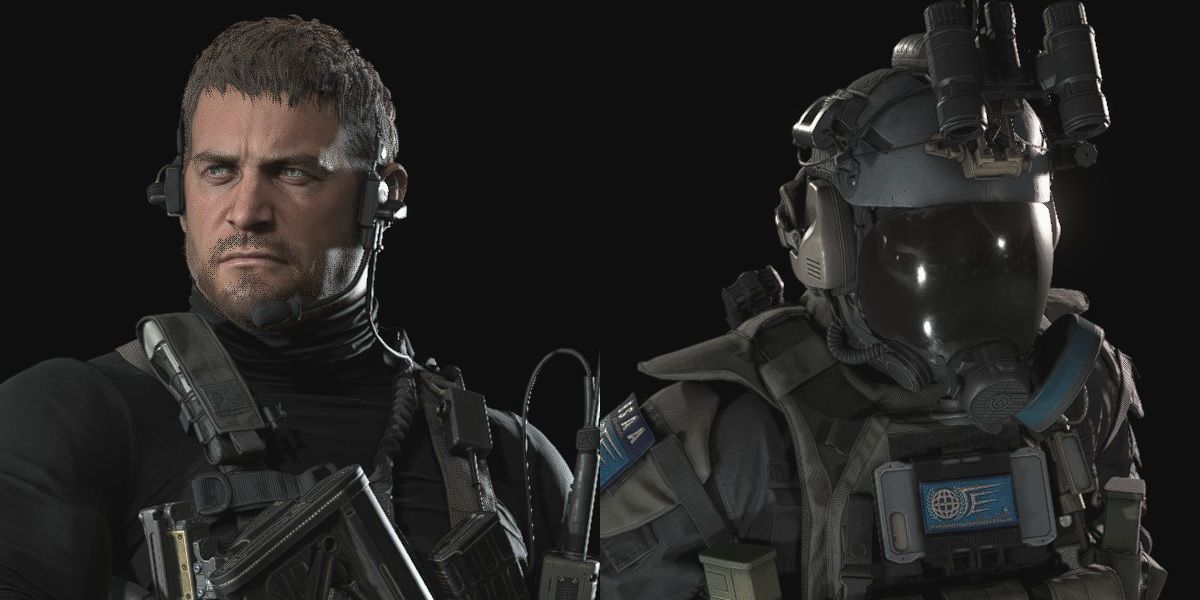 Resident Evil Village is not very connected with the events of the first several games of the series. But at the very end, we are told that the BSAA, the organization that employs several of the main characters, is using zombie-like creatures as soldiers. Why would a peacekeeping organization founded to stop the spread of zombie-creating viruses suddenly change allegiances?

Chris Redfield’s role in Resident Evil Village is a big mystery, both to protagonist Ethan Winters and the player, until very late in the game. But Chris reveals that he’s no longer working with Bioterrorism Security Assessment Alliance, or BSAA, and he must keep his actions to help Ethan quiet in order to stay under their radar. BSAA soldiers arrive during Chris’ section of Resident Evil Village but are destroyed by the forces of Mother Miranda.

At the end of the game, a member of the Hound Wolf squad shows Chris that the backup the BSAA deployed is not a human task force, and he proves it by removing the helmet from a dead soldier in the escape helicopter. The soldier is a mutant Bio-Organic Weapon (BOW), the same type of creature Resident Evil‘s villainous Umbrella Corporation was trying to create with its T-Virus research. Chris and his squad prepare to pay a visit to the BSAA’s nearest branch office, the European headquarters. But why would the BSAA, which has up to this point been the so-called good guys, be using BOWs as soldiers, and what were they doing in Resident Evil Village? Here’s the most likely explanation.

The BSAA Has Always Been Corrupt In Resident Evil Village

A history lesson might explain what the BSAA is doing in Resident Evil Village. While several of Raccoon’s survivors and other honorable soldiers were involved in early BSAA operations, the organization itself was founded by pharmaceutical companies just like Umbrella. More specifically, it was founded by the Global Pharmaceutical Consortium, of which Umbrella was once a member. According to a file on the organization in Resident Evil 5, the Consortium flipped on Umbrella to avoid massive government scrutiny in the early 2000s, when Umbrella was being prosecuted for its role in the Raccoon City Incident. While Umbrella was founded in part on the research of Ozwell Spencer and Mother Miranda, as revealed in Resident Evil Village, the company built several of its products using technology and materials purchased from other pharmaceutical companies that were members of the Consortium. The Consortium helped in the prosecution of Umbrella and founded the BSAA to avoid any government scrutiny, and the BSAA was later reformed under the control of the UN.

The Village incident is not the first time Chris has personally encountered corrupt BSAA agents, though he may not be aware of that. In Revelations, Chris’s partner Jessica Sherawat was revealed (to the player, but not to Chris) to be a mole for Tricell, a member of the Consortium and the company that would later infect the African town Kijuju in Resident Evil 5. Tricell was conducting its own BOW research, as evidenced by the fact that Jessica’s task was to retrieve some of the T-Abyss virus used in Revelations.

While there is a chance the BSAA was once a pure peacekeeping force, it was never founded with completely good intentions in mind. It’s possible the BSAA’s purpose in Resident Evil Village was to gather samples of the megamycete – an organism that gives total control over its subjects would be very valuable to any military force, especially one whose soldiers are already mindless weapons. The organization’s descent into becoming the very thing it was trying to fight is more of an inevitability than a surprise. Chris’ showdown with his former employers is likely to be the major conflict of Resident Evil 9. At the end of Resident Evil Village, as he orders his squad to head to BSAA’s European HQ, Chris says, “Someone’s gotta pay.”

Next: Resident Evil: Mia Winters’ Name Is A Joke About RE7 & RE8’s Story

Looking for a one shoulder dress for summer? Call off the search, we just found 17 of the best
Motherland: Fort Salem Season 2 Episode 6 Review: My 3 Dads
‘Pandemic brain’ is very real – and it explains why you have mental fog and can’t focus right now
40 years later, ‘Wedding of the Century’ revisits Princess Diana and Prince Charles’ nuptials
Kelly Clarkson Goes Makeup Free In A Louis Vuitton Jacket Amid Spousal Support Order