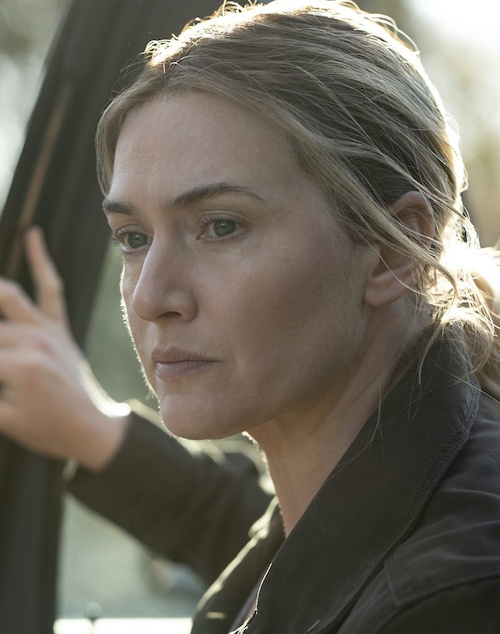 Kate Winslet, the star of Titanic, is probably not the first actress that comes to mind when you think about who might play a hockey mom-style detective working for a small-town police department in Eastern Pennsylvania. But dressed in sweats and constantly vaping, she pulls it off perfectly as Mare Sheehan in HBO’s recent crime series Mare of Easttown. British viewers can catch all the drama on Sky or Now TV.

Easttown is a rustbelt suburb of Philadelphia, which is on the slide. It’s got a forest, a river, a big bridge, a gas station and a roadhouse. Plus an opioid problem. Most of the people seem to be Irish, a lot of them are related to Mare Sheehan, and they’re Catholic too although it often seems God has forsaken them. Mare’s main problem – for she has many – is the disappearance of Katie Bailey. The young woman has been missing for over a year, her mother is battling cancer and the media are on it. So, Mare’s chief wants a county detective to ride shotgun with her to help solve the case.

As in all crime shows, when jurisdictions overlap, tempers heat up. Mare is sandpaper even to her nearest and dearest and doesn’t get off to the best start with Detective Colin Zabel, played by Evan Peters. It might take you 20 minutes or so to get used to Mare’s abrasive tongue and her constant though amusingly poetic f-bombs, but gradually the reason for her hardened attitude comes to light. Life hasn’t really rewarded Mare – not since she scored the winner for her high school basketball team 25 years ago.

Things are about to get worse. Just as Mare and Zabel are forming their partnership on the Bailey case, the body of 17-year-old single mother Erin McMenamin is found naked in a ravine just out of town. She’s been shot. In the face. The poor girl hardly felt life was worth living, anyway. Her son DJ needs an expensive ear operation but neither her drunken father nor DJ’s dad, the menacing Dylan Hinchey (Jack Mulhern), is willing to pay. Plus, Dylan’s fierce new girlfriend Brianna (Mackenzie Lansing) was out to get her. Was Erin’s murder part of a teenage feud, or does Easttown have a serial killer stalking its streets and alleys?

In a place like Easttown, Mare is used to throwing her weight around. Most people like her despite her sharp tongue, thin smoker’s lips and gritted teeth. But the approach she uses to put addicts in their place won’t work in a murder investigation. Rousting suspects in public, instantly confronting witnesses, questioning teens without lawyers – Mare doesn’t start following procedure and Zabel tries to rein her in, while also recognising her persistence and excellent detective skills.

Then there’s her home life – four generations under one roof. Mare is grandmother to Drew, her dead son’s child. Drew is the light of her life, and lives with Mare because his own mother is a recovering addict. Mare’s daughter Siobhan (Angouri Rice) and mother Helen Fahey (Jean Smart) live there too, forming a functioning and often funny household. The three women mutually support each other and raise Drew together. However, the boy’s mother wants him back. Everything is overshadowed by the fact that Mare’s son Kevin was an addict too and committed suicide. Oh, and Mare’s ex-husband lives in the house behind theirs… More emotional baggage.

Heavy, right? Dark, too. But this is a crime show that has been expertly crafted by its creator, Brad Inglesby. Massive themes such as coping with depression, overcoming grief and parental responsibility are woven into the lives of the characters so well you won’t even notice your mind pondering them while the investigation progresses. Inglesby hasn’t just invented an intriguing plot and peopled it with three-dimensional characters – Easttown feels like a living and breathing place. Just about everyone you encounter there has their own personality and outlook, from Mare’s best friend Lori (Julian Nicholson) to the creative writing lecturer (Guy Pearce) who’s new in town, not to mention a whole tribe of teenagers with various things to hide…

Mare of Easttown is set in January. It’s a cold and dreary time of year, with short days, grey skies, thick outerwear and foggy breath augmenting to the forlorn atmosphere. But it’s the interrelationships between the characters that make Mare of Easttown so appealing. No other crime show handles this so intricately and with such humanity. Nothing is black and white. This isn’t about good people trying to stop an evil killer. It’s not even about fundamental flaws or bad decisions coming back to get you. It’s about how we all are, about how every town is, and about how we relate to one another. Every scene is fascinating and can be watched over again for its visual detail and clues, as well as for the nuances in the actors’ performances. You may well find your finger hovering over the rewind button on the remote.

Emotion, atmosphere, characters, story. There hasn’t been a show quite as engaging as Mare of Easttown for a long time, and it’s not likely we’ll see another soon. It’s got detail and character like Fargo, without trying to be quirky or stylish. It’s got a melancholic and claustrophobic atmosphere like The Killing, without the unlikely new angles that suddenly crop up. And it’s got superb performances in every department, right through from the children to the old biddies. The storytelling and psychological depth are reminiscent Dennis Lehane or Karin Fossum at their very best. Its content and quality acting may also remind you of Happy Valley. Watch it without delay… if you haven’t already. And let us know what you think.

Big Willie Wordsmith: Will Smith Reveals Title, Cover, And Release Date of Autobiography
These are the best apps to use to make new friends – like Tinder but for pals
Gunna Talks Lil Baby’s $100k Gift, Shopping Spree Interrupted by Odd Fan
SOS: All the products you need to survive the summer heatwave, from cooling pillow inserts to the best desk fans
Jana Duggar & Stephen Wissmann: Secretly Engaged?!