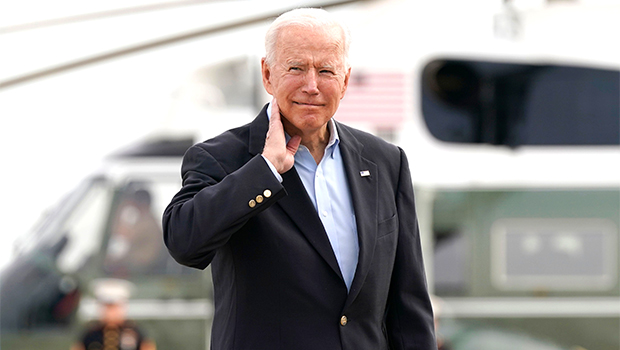 After Joe Biden’s June 9 trip abroad was delayed by a swarm of cicadas, the president was seen on video swatting one of the insects off his neck by Air Force 1.

Joe Biden was still in good spirits after a pesky swarm of cicadas surrounded him in Washington D.C. on June 9. The president was preparing to embark on his first trip abroad as president, and the cicadas were swarming as he chatted outside before getting on Air Force 1. At one point, President Biden even swatted away a cicada that landed on his neck! He kept a smile on his face, though, and continued his conversations throughout the morning.

After wrapping up, he addressed nearby reporters about the bug situation. “Watch out for the cicadas!” he warned. “I just got one — it got me!” In fact, the swarm of bugs was so bad, that the plane chartering press reporters abroad for the trip even had to be delayed! The plane was set to take off at 9:00 p.m. on June 8, but was delayed for seven hours after cicadas filled the engine.

Biden is expected to make several stops on his overseas trip. He’s headed to the United Kingdom for a Group of Seven meeting, followed by NATO summit in Belgium and a meeting with Russian President Vladimir Putin in Switzerland. Luckily, the cicadas didn’t keep the president’s plane off the ground like they did the press plane!

Much of the United States has been experiencing swarms of Brood X cicadas recently. The insects are very loud and known to swarm people, as well as fast-moving vehicles. The press charter was able to take off around 4:00 a.m. on June 9, so there should be no impact on how Biden’s overseas trip will be covered by the media.