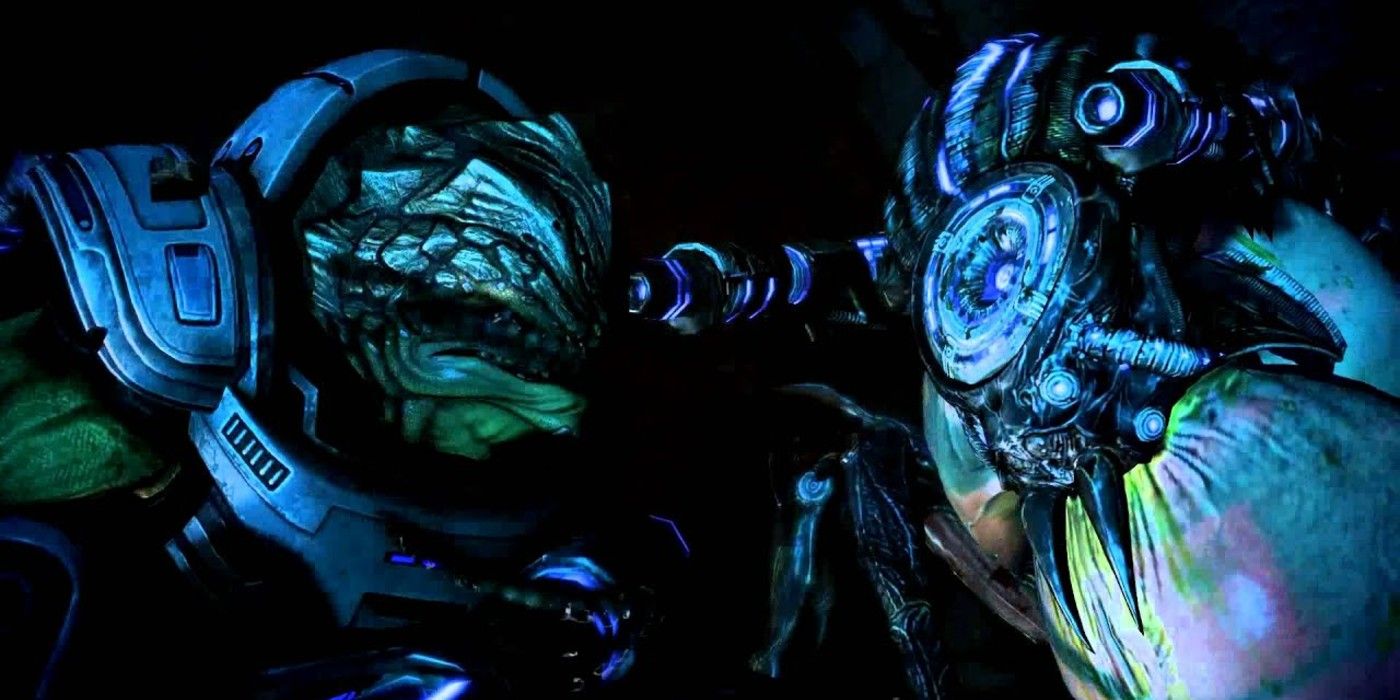 If Shepard is not careful to secure Grunt’s Loyalty, he will not survive the events of Mass Effect 3. Many fans view Grunt, the tank-bred krogan Shepard can recruit in Mass Effect 2, as a sort of son to Shepard. Provided players elected to open Grunt’s tank and recruit him in Mass Effect 2, and provided he survives the endgame Suicide Mission, he will appear during a mission around the first Act of Mass Effect 3. In this mission, Grunt and his new krogan team are looking to find a band of scouts that have gone missing while investigating beyond the rachni relay. Shepard and their squad will face rachni that have been modified with Reaper technology. Shepard’s choices in both Mass Effect 2 and this mission in Mass Effect 3 will influence whether Grunt survives.

Related: How to Scan Planets in Mass Effect 3 (& Evade Reapers)

At the end of the mission, Shepard will come face-to-face with either the Rachni Queen, if they spared her in the original Mass Effect, or the Rachni Breeder, a new queen if Shepard killed the Queen on Noveria. Choosing to spare the queen can result in a number of added War Assets, but doing so can have serious consequences for Grunt if players have not been diligent. Here’s how to save Grunt in Mass Effect 3.

How to Keep Grunt Alive During Attican Traverse: Krogan Team in Mass Effect 3

As with many companions from Mass Effect 2, to keep Grunt alive in Mass Effect 3, players will need to have secured his Loyalty. Grunt’s Loyalty mission, Rite of Passage, involves withstanding three waves of difficult enemies in an arena on Tuchanka, culminating in a fight with a Thresher Maw. Completing the ritual allows Grunt to become a member of Clan Urdnot. This Loyalty mission cannot be failed, so as long as players completed it, Grunt should remain Loyal to Shepard. This ensures that, no matter the player’s decision during Attican Traverse: Krogan Team, Grunt will survive.

If players did not complete Grunt’s Loyalty mission, there is still a way to save him in Mass Effect 3. Shepard will need to abandon the Rachni Queen or the Breeder at the end of the mission. If Shepard tries to save either of them, Grunt’s team covers their escape and suffers heavy losses. The only way to keep a non-loyal Grunt alive during this cover is to avoid putting his team in harm’s way and choosing to let the Queen or Breeder die.

Generally, players should only attempt to rescue the Rachni Queen if it is the same individual they saved on Noveria in Mass Effect. The Breeder proves herself untrustworthy, sabotaging the Crucible and leading to heavy War Asset losses, as well as the loss of any remaining members of Grunt’s team.

Saving Grunt nets players up to an extra 50 points in War Assets. Of these, 25 points appear in the Aralakh Company’s war asset. The other 25 only count if Grunt is Loyal and part of Clan Urdnot.

Next: Mass Effect 3: How to Betray Urdnot Wrex

Mass Effect: Legendary Edition launches May 14 for PC, PlayStation 4, and Xbox One, with forward compatibility on PlayStation 5 and Xbox Series X/S.

Maria Meluso is a staff game guide and game review writer for Screen Rant based in the Midwestern United States. She covers everything from massive, open-world RPGs to small-scale indie horror projects. She’s the kind of person who loves instructions and manuals but who is stubborn and competitive enough to wait to consult game guides until she’s hit game over at least 15 times. When not writing, you can usually find her playing fantasy RPGs like Dragon Age and writing screenplays.

‘Below Deck’ Baby Drama: ‘Sailing Yacht’ Star Jean-Luc Breaks Silence On Dani’s Daughter
NYC Psychiatrist Says ‘Psychopathic’ Whites Steal Everything, She Fantasizes About Killing Them
The Tomorrow War Trailer Is Here and I Have Questions
Resident Evil Village: Why The BSAA Is Using Zombies
Steven Keaton on ‘Family Ties’ ‘Memba Him?!