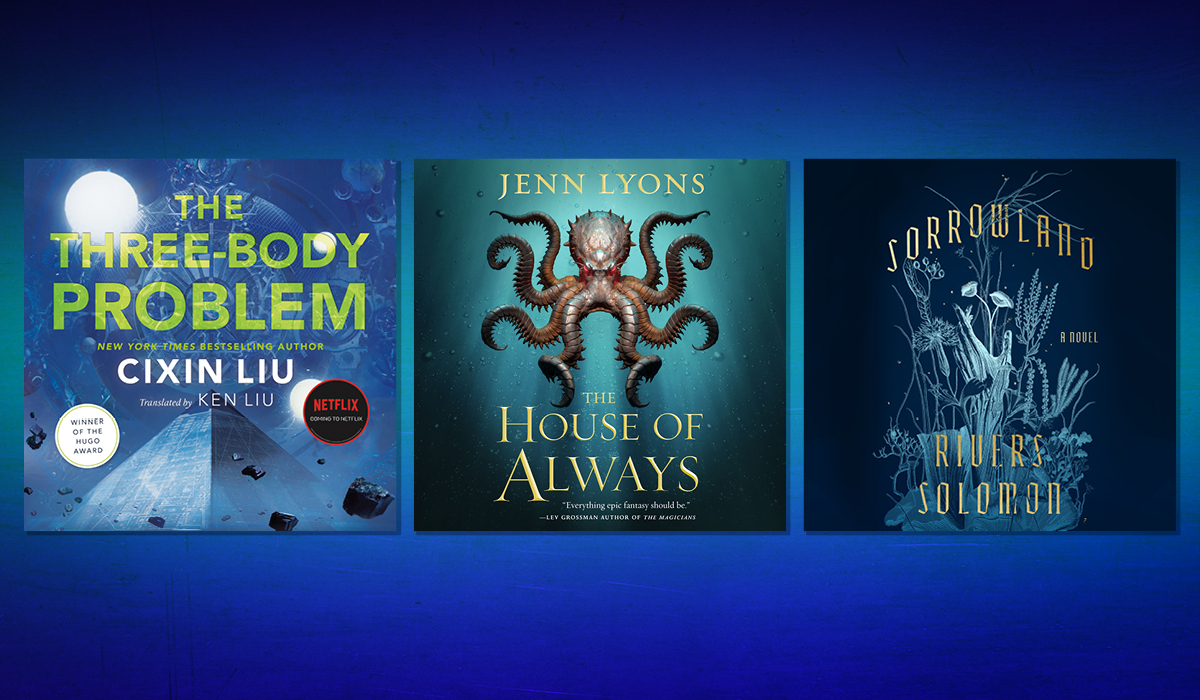 With May here, we’re excited to dive into a new world of audiobooks. This month’s listen-list includes some of the spring’s most exciting new releases and several old favorites you don’t want to miss. Whether you’re looking for a genre-bending work of Gothic fiction like River Soloman’s Sorrowland or a rollicking fantasy adventure like Christopher Buehlman’s The Blacktongue Thief, we’re sure you’ll find something that you love.

You can purchase the audiobooks here.

A triumphant, genre-bending breakout novel from one of the boldest new voices in contemporary fiction

Vern—seven months pregnant and desperate to escape the strict religious compound where she was raised—flees for the shelter of the woods. There, she gives birth to twins, and plans to raise them far from the influence of the outside world.

But even in the forest, Vern is a hunted woman. Forced to fight back against the community that refuses to let her go, she unleashes incredible brutality far beyond what a person should be capable of, her body wracked by inexplicable and uncanny changes.

To understand her metamorphosis and to protect her small family, Vern has to face the past, and more troublingly, the future—outside the woods. Finding the truth will mean uncovering the secrets of the compound she fled but also the violent history in America that produced it.

2. A MASTER OF DJINN by P. Djèlí Clark | read by Suehyla El-Attar

Cairo, 1912: Though Fatma el-Sha’arawi is the youngest woman working for the Ministry of Alchemy, Enchantments and Supernatural Entities, she’s certainly not a rookie, especially after preventing the destruction of the universe last summer.

So when someone murders a secret brotherhood dedicated to one of the most famous men in history, al-Jahiz, Agent Fatma is called onto the case. Alongside her Ministry colleagues and a familiar person from her past, Agent Fatma must unravel the mystery behind this imposter to restore peace to the city—or face the possibility he could be exactly who he seems…

3. THE BLACKTONGUE THIEF by Christopher Buehlman | read by the author

Set in a world of goblin wars, stag-sized battle ravens, and assassins who kill with deadly tattoos, Christopher Buehlman’s The Blacktongue Thief begins a ‘dazzling’ (Robin Hobb) fantasy adventure unlike any other.

Kinch Na Shannack owes the Takers Guild a small fortune for his education as a thief, which includes (but is not limited to) lock-picking, knife-fighting, wall-scaling, fall-breaking, lie-weaving, trap-making, plus a few small magics. His debt has driven him to lie in wait by the old forest road, planning to rob the next traveler that crosses his path.

But today, Kinch Na Shannack has picked the wrong mark.

Galva is a knight, a survivor of the brutal goblin wars, and handmaiden of the goddess of death. She is searching for her queen, missing since a distant northern city fell to giants.

Unsuccessful in his robbery and lucky to escape with his life, Kinch now finds his fate entangled with Galva’s. Common enemies and uncommon dangers force thief and knight on an epic journey where goblins hunger for human flesh, krakens hunt in dark waters, and honor is a luxury few can afford.

4. THE HOUSE OF ALWAYS by Jenn Lyons | read by Vikas Adam and Lauren Fortgang

For fans of Brandon Sanderson and Patrick Rothfuss, The House of Always is the fourth epic fantasy in Jenn Lyons’ Chorus of Dragons series that began with The Ruin of Kings.

In the aftermath of the Ritual of Night, everything has changed. The Eight Immortals have catastrophically failed to stop Kihrin’s enemies, who are moving forward with their plans to free Vol Karoth, the King of Demons. Kihrin has his own ideas about how to fight back, but even if he’s willing to sacrifice everything for victory, the cost may prove too high for his allies.

Now they face a choice: can they save the world while saving Kihrin, too? Or will they be forced to watch as he becomes the very evil they have all sworn to destroy.

At the dawn of the nineteenth century, two very different magicians emerge to change England’s history.

In the year 1806, with the Napoleonic Wars raging on land and sea, most people believe magic to be long dead in England—until the reclusive Mr Norrell reveals his powers, and becomes a celebrity overnight.

Soon, another practicing magician comes forth: the young, handsome, and daring Jonathan Strange. He becomes Norrell’s student, and they join forces in the war against France. But Strange is increasingly drawn to the wildest, most perilous forms of magic, straining his partnership with Norrell, and putting at risk everything else he holds dear.

6. THE IMMUNITY INDEX by Sue Burke | read by Chloe Dolandis

In a US facing growing food shortages, stark inequality, and a growing fascist government, three perfectly normal young women are about to find out that they share a great deal in common.

Their creator, the gifted geneticist Peng, made them that way—before such things were outlawed. Rumors of a virus make their way through an unprotected population on the verge of rebellion, only to have it turn deadly. As the women fight to stay alive and help, Peng races to find a cure—and the cover up behind the virus.

Soon to be a Netflix Original Series!

The Three-Body Problem is the first chance for English-speaking readers to experience the Hugo Award-winning phenomenon from China’s most beloved science fiction author, Liu Cixin.

Set against the backdrop of China’s Cultural Revolution, a secret military project sends signals into space to establish contact with aliens. An alien civilization on the brink of destruction captures the signal and plans to invade Earth. Meanwhile, on Earth, different camps start forming, planning to either welcome the superior beings and help them take over a world seen as corrupt, or to fight against the invasion. The result is a science fiction masterpiece of enormous scope and vision.

8. THE BLADE OF SECRETS by Tricia Levenseller | read by Emily Ellet

In Blade of Secrets, the first audiobook in Tricia Levenseller’s exciting new YA fantasy duology, a teenage blacksmith with social anxiety is forced to go on the run to protect the world from the most powerful magical sword she’s ever made.

Eighteen-year-old Ziva prefers metal to people. She spends her days tucked away in her forge, safe from society and the anxiety it causes her, using her magical gift to craft unique weapons imbued with power.

Then Ziva receives a commission from a powerful warlord, and the result is a sword capable of stealing its victims secrets. A sword that can cut far deeper than the length of its blade. A sword with the strength to topple kingdoms. When Ziva learns of the warlord’s intentions to use the weapon to enslave all the world under her rule, she takes her sister and flees.

Joined by a distractingly handsome mercenary and a young scholar with extensive knowledge of the world’s known magics, Ziva and her sister set out on a quest to keep the sword safe until they can find a worthy wielder or a way to destroy it entirely.

Hunter and Mercy Goode are twin witches, direct descendants of the founder of their town of Goodeville. As their ancestors have done before them, it is now time for the twins to learn what it means to be Gatekeepers—the protectors of the Gates to different underworlds, ancient portals between their world and realms where mythology rules and nightmares come to life.

When their mother becomes the first victim in a string of murders, the devastated sisters vow to avenge her death. But it will take more than magic to rein in the ancient mythological monsters who’ve infected their peaceful town.

Now Hunter and Mercy must come together and accept their destiny or risk being separated for good.

Kelsier recruited the underworld’s elite, the smartest and most trustworthy allomancers, each of whom shares one of his many powers, and all of whom relish a high-stakes challenge. Only then does he reveal his ultimate dream, not just the greatest heist in history, but the downfall of the divine despot.

But even with the best criminal crew ever assembled, Kel’s plan looks more like the ultimate long shot, until luck brings a ragged girl named Vin into his life. Like him, she’s a half-Skaa orphan, but she’s lived a much harsher life. Vin has learned to expect betrayal from everyone she meets, and gotten it. She will have to learn to trust, if Kel is to help her master powers of which she never dreamed.

This saga dares to ask a simple question: What if the hero of prophecy fails?

You can purchase the audiobooks here.

Be sure to check out these 10 fantastic science fiction and fantasy audiobooks from April’s pick!