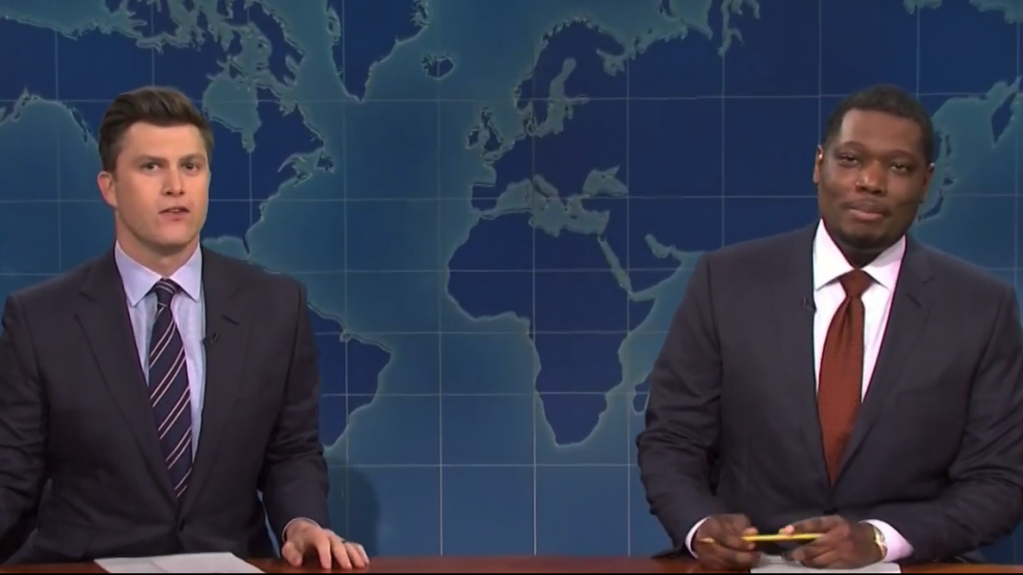 “I don’t know if you guys were following the news today,” Jost said, in kicking things off, “but a space rocket that was spinning out of control just minutes ago crashed into the ocean—and for once, we know it’s not Elon’s fault.

Jost was referring to a breaking news story, which saw pieces of a Chinese rocket rain down on the Indian Ocean. “A lot of people have been wondering, ‘Why is he hosting our show?’” the anchor added. “And now we know, it’s because he needed an alibi.”

In other rocket news, Jeff Bezos’ company, Blue Origin is auctioning off a seat on the first flight of its passenger rocket. “Wow. Why are all these rich white people trying to go to space?” said Che. “Look, if there’s any martians watching this, when you see a bunch of foreign ships pull up on your land, take it from a Black dude: Don’t get on them. Unless you want to be a martian with the last name ‘Washington.’”

Jost’s next target was Trump’s website, titled “From the Desk of Donald J. Trump.”

“Disgraced former fast food spokesperson Donald Trump has launched a website,” he said. “Though a more accurate title would be, ‘From the Brain Fog of Long-Haul Covid.’”

Then, there was Florida Governor Ron DeSantis, “who played the the short bully in A Christmas Story,” per Che.

“DeSantis..signed new restrictive voting laws that limits the locations of dropboxes, and new requirements for voting by mail. Wow, since when does Florida care so much about the law?” the anchor said. “The last time I was in Florida, I saw a lady lighting fireworks with a crack pipe. Worst gender reveal ever.“

One of three special panelists welcomed to Update tonight was Lloyd Ostertag, or “Dogefather,” a financial expert played by Musk, who appeared to explain what cryptocurrency is. Each time he answered one of the anchors’ questions, they were still left wondering, “Okay, but what is Dogecoin?” Eventually, though, they agree that it’s just “a hustle.”

Appearances were also made by “Pauline, a weary mother in her darkest hour” (Ego Nwodim) who had just gotten back to a trip to Disneyland with her kids, and returning character Baby Yoda (Kyle Mooney), who had been hitting the gym since he last stopped by.

Of course, Che wondered whether the star of Disney+ drama The Mandalorian had done anything special earlier this week, to celebrate the Star Wars Day holiday held each year on May 4.

Check out tonight’s opening segment above.

The segments with Ostertag, Nwodim’s Weary Mother and Baby Yoda, and more jokes can be found below.

These are the best apps to use to make new friends – like Tinder but for pals
Bradley Cooper Is A Doting Dad Carrying Sweet Daughter Lea, 4, To A Class In NYC – See Pics
Film Review: The Amusement Park (2019)
It’s Official: Manifest Won’t Have a Season 4 as It Fails to Find a New Home
T-Pain Says a Comment From Usher About His Auto-Tune Sent Him Into a 4-Year Depression