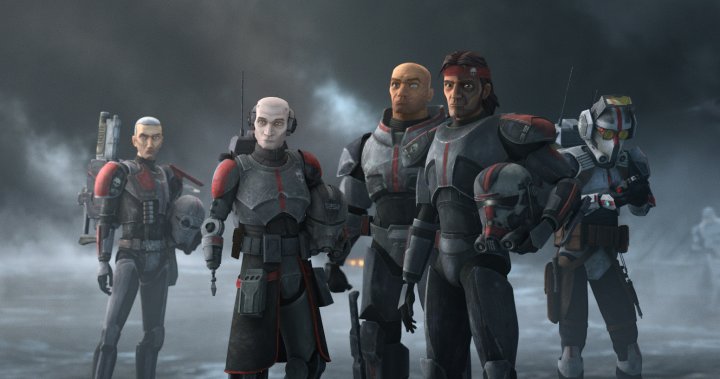 To be sure, there is no dearth of Star Wars content. (That’s “dearth,” not Darth.) It feels like every month there’s a new Star Wars offshoot for audiences to take in, along with a continuous flow of superhero movies. It can seem like a lot.

The good news is Star Wars: The Bad Batch has a very different feel from all of the recent Star Wars releases. More in-tune with the animated The Clone Wars — Bad Batch‘s predecessor that aired for 12 years — there’s humour, action and a dedication to the franchise’s lore and history. The majority of recent projects have tended to fall short of audience expectations, but after watching one episode of Bad Batch, Star Wars fans might just have something new to love.

Why does ‘Bad Batch’ stand out?

Aside from the fact that it’s animation, a refreshing turn from the umpteen live-action Star Wars series and movies, it has a certain element that makes it both entertaining and watchable.

The series follows the “Bad Batch,” a group of five mutated clones that make up Clone Force 99. Their names are Wrecker, Hunter, Echo, Tech and Crosshair, and each of them has enhanced senses that make them more powerful than your standard clone.

It’s sort of like X-Men meets Star Wars. In a way, Bad Batch‘s story is a microcosm of itself: an anomaly amongst the repetitive masses.

We all know that ended with the creation of adult-focused cartoons some decades ago, and Bad Batch doesn’t feel like a show for kids only. While yes, the writing is simplistic and there are a few sight gags and witty one-liners for the kiddies, there’s enough here to keep adults entertained. Much of the comedy is dry and will go right over young kids’ heads.

Additionally, the animation is good enough that, at times, it’s easy to forget it’s not live-action. While it’s great to have some Star Wars knowledge going in, it’s not imperative; things are explained in full from moment one.

Again, with Star Wars, it’s easy to assume that it’ll be the same storyline or very similar to stories we’ve seen before: the Empire vs. the Jedi, the Jedi taking down the baddies via a weak spot in the Empire’s construction/alliances/plan, and everyone is happy in the end. Not so with Bad Batch (at least after Episode 1).

Without spoiling, the series starts off with a rather brutal surprise and continues on an interesting trajectory. Taking place after the Clone War ends, the galaxy is supposed to be in harmony. Instead, the Empire doubles down and makes everything awful again, leaving the Bad Batch in a tough spot. Do they disobey orders and go against the Empire, or do they stay true to their origins?

On top of everything else, the galaxy is being thrust into a new civil war, which dovetails nicely with the current state of affairs in western societies — it feels like there are “two sides” in political and social affairs, so purposeful or not, the plotline is actually quite resonant.

Again, very engaging. There are silly sequences like a food fight in the cafeteria, but there are also multiple battle scenes that held my attention; in multiple instances, I forgot it was animated. Outstanding work by the animators and storyboard artists in this realm. For the kids, we meet a little girl named Omega who turns out to be more than meets the eye. Size, it seems, is not indicative of ability.

So what’s the bottom line?

The first episode of Bad Batch is an exciting, enjoyable hour, and an excellent start to the series. Both kids and adults should find enough here to keep them entertained — and the story is engaging enough that people should have no trouble streaming the whole season in one sitting (if one has the time). For those of us who’ve had a Star Wars hankering since the Season 2 ending of The Mandalorian, this should do the trick.

(It’s fitting that this show is starting up on May the 4th, while The Clone Wars ended on the same day in 2020. Full circle.)