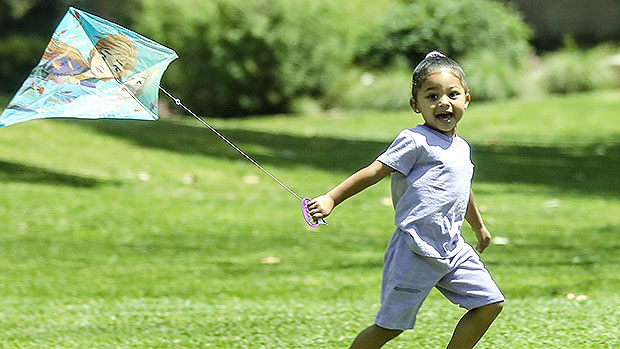 Kylie Jenner’s daughter Stormi looked like any other three-year-old discovering the simple joy of flying a kite on a beautiful spring day.

Despite a life of luxury in which Stormi Webster already has a fleet of luxury toy cars including a mini-Mercedes G-Wagon and a pink Lamborghini Aventador, she’s still thrilled by a simple toy like a kite. The three-year-old was photographed in a Beverly Hills park on Apr. 15, enjoying the form of play accessible to all children. Kylie Jenner‘s precious daughter held on tight to the handle as she ran and her Frozen themed kite took flight behind her in the precious photo.

Stormi looked so cute in a light lavender outfit of a t-shirt and matching shorts, along with white tennis shoes. She had her hair pulled up in a topknot with a lavender scrunchie, and a bright smile on her face as she flew her kite. Stormi seemed to be accompanied by a younger female babysitter or possible protection-type, who ran close behind her wearing a black graphic t-shirt, black pants and flip flops.

Usually Kylie and Stormi are joined at the hip — and Kylie even takes her daughter to the office as she has her own playroom at Kylie Cosmetics headquarters. But the 23-year-old beauty mogul appeared to be heading out of town on Apr. 13 on a business trip. She was aboard her pink private jet — a.k.a. Kylie Air — and modeling a gorgeous Magda Butrym cream knit business suit for fans via her Instagram. She clearly meant to impress for work, as her main accessory was a Hermes Kelly 20 Mini Sellier Vert Cypress Gold Hardware handbag, which is worth an eye watering $79,995.

Before she left on her trip, Kylie took Stormi to a gymnastics class where she got to play to her heart’s content. In an Apr. 10 Instagram stories video, a red balance beam could be seen nearby, as a coach-type could be seen pushing Stormi down an indoor zipline over a set of thick mats in case she fell off. But she didn’t, as Stormi enjoyed the ride with her big bright smile showing.

Stormi was seen later the same day while outside, bouncing up and down on a trampoline in the same glittery blue gymnastics outfit she had on at the children’s gym. She was safely inside a protective net, and the trampoline appeared to be set up in the backyard of Kylie’s $36.5 million Holmby Hills mansion. In the Apr. 10 IG stories video, Kylie wrote “my whole world” over video of Stormi bouncing up and down. The incredibly well mannered little girl squealed, “Thank you, Mommy!” The doting mom replied with, “Aww you’re welcome, my baby.”