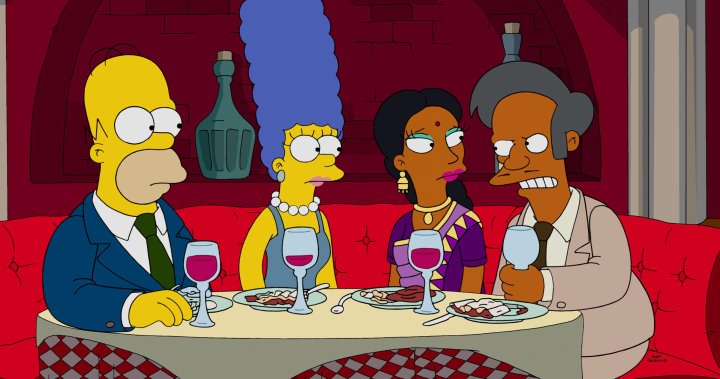 Azaria, who voiced the fan favourite character since he first appeared on the show in 1990, issued the apology Monday on Dax Shepard and Monica Padman’s podcast Armchair Expert. It was especially poignant for Padman, who is Indian.

The Simpsons had come under fire over the years for its depiction of Apu, whose thick Indian accent — voiced by a white Azaria — caused backlash and accusations of racism. In 2017, the documentary The Problem With Apu examined the damage of the portrayal and enduring stereotype, and how that rippled through society over decades.

Azaria in particular became the focus of fallout, and he ultimately decided to step away from the role in 2020 after getting sober.

“This was not a two-week process — I needed to educate myself a lot,” he said on the podcast. “If I had not gotten sober, I promise you it wouldn’t have taken much wine for me to be in my feelings one night and fire off a tweet that I felt justified in firing off. Some kind of defensive, white-fragile tweet. Boy, was I glad I had a system in place where I could look at this thing.”

“I really do apologize,” Azaria, 56, continued. “I know you weren’t asking for that, but it’s important. I apologize for my part in creating that and participating in that. Part of me feels like I need to go to every single Indian person in this country and personally apologize. And sometimes I do.”

He claimed that he “really didn’t know any better” at the start, but he continues to educate himself on it after voicing the character for 30 years.

“I was speaking at my son’s school. … I was talking to the Indian kids there because I wanted to get their input,” he said. “A 17-year-old — he’s never even seen The Simpsons but knows what Apu means. It’s practically a slur at this point. All he knows is that is how his people are thought of and represented to many people in this country.”

Simpsons fans took to Twitter in 2018 after the episode No Good Read Goes Unpunished aired, which saw Marge and Lisa indirectly discussing the portrayal of Apu. The mother and daughter talk about a new, edited version of The Princess in the Garden and how it had been altered to be acceptable and inoffensive in 2018.

Lisa explained, “Something that started decades ago and was applauded and inoffensive is now politically incorrect. What can you do?”

A framed photo of Apu was also shown, with the words “Don’t have a cow, man” — Bart’s once-ubiquitous phrase — written underneath.

In response to the controversy, at the time Azaria told Stephen Colbert that he just wanted to “spread laughter and joy with this character.”

“And I’ve tried to express this before: You know the idea that anybody — young or old, past or present — was bullied or teased based on the character of Apu, it just really makes me sad,” Azaria said. “It was certainly not my intention. I wanted to spread laughter and joy with this character. And the idea that it’s brought pain and suffering in any way, that it’s used to marginalize people, it’s upsetting, genuinely.”

He then went on to make a similar remark about representation, which he repeated Monday on the podcast.

“If it’s an Indian character, or a Latinx character, or a Black character, please, let’s have that person voice the character,” he said. “It’s more authentic, they’ll bring their experience to it. Let’s not take jobs away from people who don’t have enough.”

The Simpsons is currently approaching the end of its 32nd season.