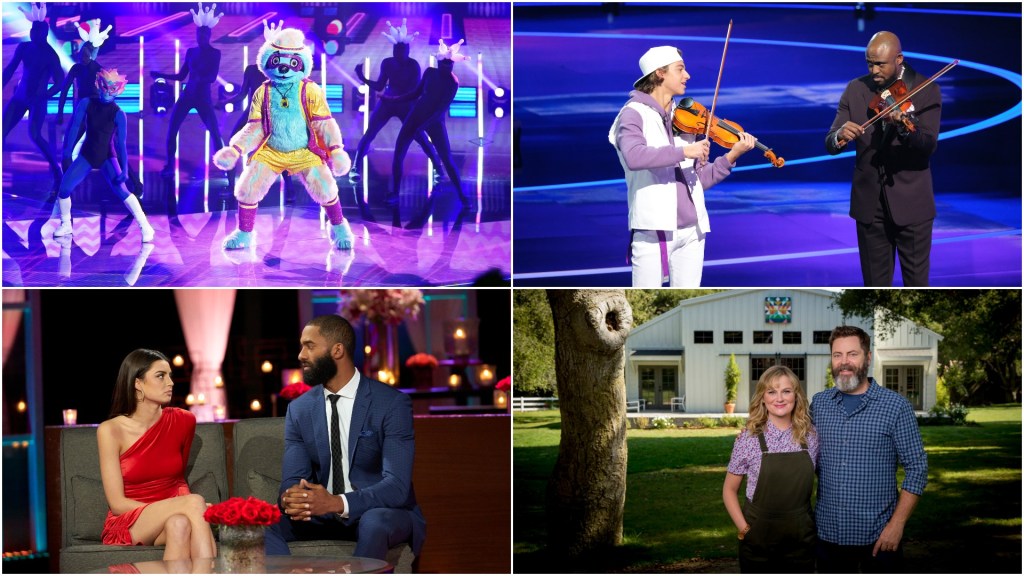 The unscripted TV business has never been as glamorous as the movie business or the premium scripted world, but the last twelve months of the pandemic have highlighted how important the sector is to the entertainment world.

Shows like The Voice, The Masked Singer and The Bachelor franchise have propped up the broadcast networks during a rotten twelve months and Disney and Fox have launched their own alternative units to double down in the genre.

There’s a growing hunt for talent, both working with A-list stars that have overall deals on the scripted side, and new voices that can help find the next Dancing with the Stars or American Idol, while all of the major suppliers are continuing to search for international formats that can become the next big hit.

Mike Darnell, President, Warner Bros. Unscripted and Alternative Television, said that the unscripted world has done an “exceptional job” during Covid and his studio was able to sell between 20 and 25 shows between March 2020 and January 2021. “Network television is counting on reality a little more, even without Covid. We can do 85 episodes of The Voice so on a dependency level, it’s even more important than ever, but I still think we’re not quite as glamorous.”

In February, Disney announced plans to launch Walt Disney Television Alternative, a non-scripted studio run by ABC and Hulu alternative chief Rob Mills. The company wants to replicate what it has on the scripted side with ABC Signature and 20th Television on the unscripted side. “We’re going to ramp up slowly. We’re not going to be Fremantle overnight but between ABC, Hulu, Freeform, Disney+ and Nat Geo, this couldn’t be a company that’s more equipped to need this kind of programming so it’s really exciting.”

Mills will be leveraging its relationships on the scripted side as more and more A-list stars move into the non-scripted genre. Disney has scripted overall deals with the likes of LeBron James, Kerry Washington, Dan Fogelman and John Legend. “There’s so much great talent that are under deals both on the 20th side and the ABC Signature side, that it’s been great to talk to them and hear what excites them. It’s always fascinating to hear ideas from somebody who is not traditionally in this space. They usually have a different way of thinking that can lead to some exciting new projects,” Mills added.

This has been highlighted at Universal Television Alternative Studio. The company has a deal with Parks and Recreation star Amy Poehler, which led to competition format Making It, which is returning for its third season this summer. It is also working with Dwayne ‘The Rock’ Johnson on The Titan Games (left).

President Toby Gorman tells Deadline that bringing the alternative studio under the umbrella of Pearlena Igbokwe’s Universal Studio Group, rather than at the NBC network where it was previously placed, means it is able to work with more of its talent. “There are so many more [stars] that we work with. Before there wasn’t such a clear path, but now we’re one group it has improved dramatically, we’re way more plugged in than we used to be.”

NBCU has scripted overall deals with the likes of Larry Wilmore, Nahnatchka Khan and Michael Shur as well as unscripted deals with The Hustler creator Richard Bacon. “It’s incredible exciting for our big scripted overalls to realize there’s a really good non-scripted studio that can open up more doors,” he added.

Warner Bros’ big scripted overall deal with Ava DuVernay led to the creation of Home Sweet Home, a major new social experiment format that was picked up by NBC. Darnell said it had been looking to get into the genre for some time and DuVernay’s show, which sees very different families trade lives, sold in a day. “There’s always a hunger for sameness but it’s also where you’re going to have the least success.”

It is also working with Ellen DeGeneres, who has become somewhat of a non-scripted factory with shows such as Ellen’s Game of Games to NBC, The Masked Dancer on Fox. Darnell and his team are working closely with sister streamer HBO Max on series from both including DuVernay’s docuseries One Perfect Shot and Ellen’s Next Great Designer, but its core business has been selling shows to third party broadcasters such as The Bachelor and its many spinoffs to ABC and new titles such as The Wheel to NBC.

He said that because networks have always taken some rights to unscripted shows, which are fully financed by the broadcasters, and cable networks have largely owned shows, he believes that nets will always buy from rival studios. He expects the launch of Disney’s alternative studio and Fox Alternative Entertainment will lead to more co-productions, but doesn’t think that networks will only buy from their own studios. “The internal production units don’t really have a big advantage because it’s not like the scripted area,” he added.

This is a view echoed by UTAS’ Gorman, who believes the move under USG will help. He said that the company is “really close” on a couple of shows for outside parties. “It’s going to happen this year,” he added. “Pearlena’s done it so I can see it’s already helping.”

“I think that’s the benefit of Rob Mills and Rob Wade starting their studios. Our studios can collaborate and produce together. When it makes sense for both of our studios, we will absolutely collaborate, the door is open,” he said.

Fox Alternative Entertainment, which launched in 2019, run by former UTA agent Allison Wallach, is already collaborating on shows such as The Masked Singer (right), with Craig Plestis’ Smart Dog Media, The Masked Dancer, with Warner Bros, as well as producing its own projects such as Eric Stonestreet-fronted competition format Domino Masters.

Wallach, who started the job four weeks before the pandemic, said that it has spent a large portion of the last twelve months developing and working with on-screen talent behind the scenes on new projects. “We have a lot of game and competition shows that could live on Fox, but we also have the fortune of being able to develop stuff that might not make sense for a broadcast network,” she added.

Her boss, Rob Wade, President, Alternative Entertainment & Specials, Fox Entertainment, added that one of its priorities on the production side is to find new talent, particularly behind the scenes. He said Wallach is setting up a fast-track program to find fresh ideas. He was recently buoyed watching the Oscar nominations the diversity on the feature side, highlighting Promising Young Woman creator Emerald Fennell. “Look at someone like that who’s writing an Oscar-nominated movie and she’s 35 years old. I think we need to find a frictionless way for younger people to come up with ideas because great creative ideas tend to come from a younger generation. The way unscripted is structured means that maybe we’re not hearing those younger voices,” he said. “Otherwise, you’re going to hear the same ideas from the same people and we want to address that.”

This could eventually lead to a new boom in fledgling production companies and ultimately a frenzy among the studios and superindies to once again buy up the best companies. “It’s an arms’ race,” said one unscripted source. “Think how much has changed in the last five years and imagine what will change over the next five. The companies that are going to dominate might not be the companies dominating right now.”

Cris Abrego, who was promoted to Chairman of the Americas, Banijay and President and CEO, Endemol Shine Holdings, said diversity is a major focus for him and his company, which includes nine production labels including Endemol Shine North America, Bunim-Murray and Truly Original. He has tasked all of his production companies with finding new talent. “When I took this role, one of the areas I wanted to figure was where we can grow and make more diverse programming,” he said. “I grew up in a bilingual household, my mom watched Spanish TV and my dad watched TV in English. It’s great to see all of the energy and focus in the last couple of years and it’s become a broader conversation.”

Banijay, which across the group produces shows such as MasterChef, Big Brother and Deal or No Deal, has the advantage of having formats coming out of all of its international markets.

Abrego said one of its classic formats that it is looking to bring back to the States is long-running British series Scrapheap Challenge, which was known as Junkyard Wars when it aired on TLC in the early 2000s.

A new format that it has high hopes on is Famous Last Words, a Danish format that sees celebrities record an interview that is only aired after they have died. Abrego said that is currently in circulation among its groups and he acts as the gatekeeper, although he admitted the process is tricky as he’s not allowed to have a “favorite child”.

Fremantle is another major supplier of international formats. The RTL-owned producer has recently found success with Wayne Brady-hosted Game of Talents on Fox, based on a Spanish format, and makes series such as American Idol and America’s Got Talent.

Two global formats that it currently has its eyes on are Find Me Somebody To Love (above) and Small, Town Big Love. The latter is also a Danish dating format, while the former is an Israeli format that sees four women putting their lives on hold and deleting their dating apps in the hope of finding true love.

Jayson Dinsmore, President, Alternative Programming and Development for Fremantle in North America said that it is about to take Find Me Somebody To Love out to market. “The Bachelor is such a beast that it was sort of a category killer in the broadcast space for years and it took Netflix to find Love Is Blind and Too Hot To Handle to realize there is more room in this space,” he told Deadline.

The company also has a number of classic gameshows on the air at ABC including Card Sharks and To Tell The Truth.

Similarly, Sony Pictures Television has The $100,000 Pyramid at ABC along with The Celebrity Dating Game and Celebrity Wheel of Fortune.

Classic gameshow reboots aren’t going anywhere but they are finding new homes. Fremantle recently set up TattleTales with Ayesha and Stephen Curry at HBO Max. Dinsmore said it was very “fortunate” to have the Goodman-Todman library at Fremantle and that these formats were easier to sell because they are “bulletproof”.

He added it’s only a matter of time before streaming cracks the gameshow and competition formats. “We’re at a very unique moment with the unscripted business in that consolidation and a shifting focus towards streamers has created an opportunity to rethink the deal process and the types of shows that we want to make,” he said.

Darnell, who is also high on the opportunities for docuseries, said that he’s optimistic about the sector’s future. “Hopefully we’ll be back to a sense of normalcy soon. I feel good that the unscripted area has done a good job figuring it out,” he added

“We as a genre benefited a little bit from Covid because we were able to pivot quickly and execute efficiently,” added UTAS’ Gorman. “But just knowing the volume of what we are up to over the next couple of years, it’s an incredibly healthy spot and is set to continue.”

Helen McCrory death: Tributes from fellow actors, colleagues and admirers that will break your heart
Interview with Athxna
Here’s What You Missed at Vanity Fair’s Cocktail Hour, Live! Act One
‘Predator’ Screenwriters Latest to Sue in Effort to Recapture Rights
Hustlers’ Usher Raymond Under Fire After Allegedly Throwing Down Fake Money At The Strip Club