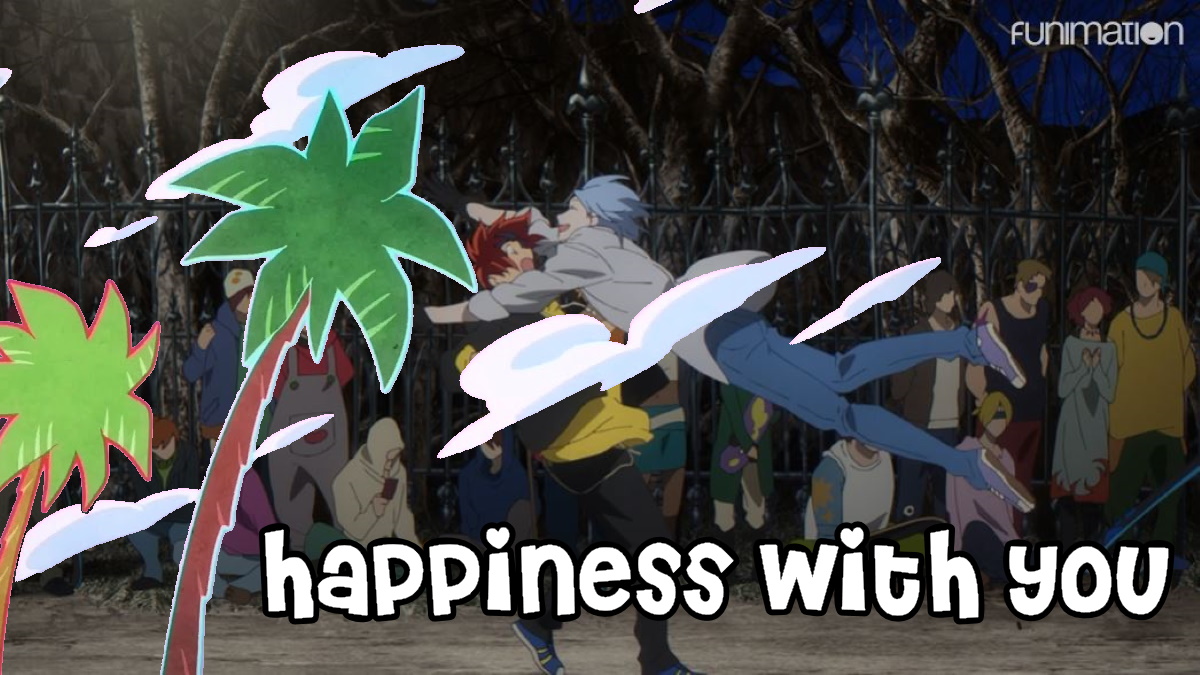 Spoilers for SK8 the Infinity

I’ve gone on record saying that shipping and sports anime go together like two boys creating an infinity symbol with their fists to signify the fact that they’ll skate together forever.

Yeah, we gotta talk about SK8 the Infinity’s finale, and how we Renga shippers (aka: those who ship the two leads, Reki Kyan and Langa Hasegawa) won big at S this last Saturday.

For a quick guide on the main ships of the series, you can check out this write-up here (though admittedly, my new budding ship of Manager Oka and Shadow isn’t there because I didn’t realize I needed that until the finale). That nifty article goes into detail about what’s so great about Reki and Langa, at least up to episode nine.

Here what you need to know about episodes ten and eleven in regards to our two leads before we get to the finale.

—REKI AND LANGA MADE UP BIG TIME! Reki came to terms with the fact that it’s okay that he isn’t like Langa and the others as long as he’s enjoying skateboarding. Once he caught up to Langa, the two skateboarded together, with Langa confirming what we already knew—he enjoys skateboarding the most when he’s with Reki. Langa goes on a monologue where he unapologetically admits all of this to Reki, making him completely flustered, but Reki agrees that he wants to skate with Langa for infinity.

Also? It followed so many romance movie tropes. Like. “Be invited into boyfriend’s house by boyfriend’s mom,” and, “Look around boyfriend’s room and find pictures and video of him being a cute, happy adolescent, so I can fall even more in love.”

—Lots of cute “we’re back together” moments that negate the severity of Reki having to go up against Adam in a beef. It’s important to note that Reki isn’t nearly as scared as he was before now that he and Langa have worked things out, the two enjoying skateboarding for what it is.

—Langa reveals how upset he is about his broken skateboard and how he never realizes how important things are until he loses them. He admits that this includes Reki, too, but Reki assures him that things that are broken can be fixed, JUST LIKE THE TWO OF THEM.

—Reki goes on to face Adam in a beef, hoping to beat him so he and Langa can face each other. Reki’s inspired by the message of having fun and Langa cheering him on the entire time. Reki realizes what we, and Langa, already knew—he’s skilled af and someone worth remembering when it comes to skateboarding. This gets Adam REAL MAD but Langa steps up to protect Reki.

Honestly, it’s impossible for me to talk about Reki and Langa without thinking of them as, at the very least, two boys with an extremely strong bond. Friend doesn’t feel like a strong enough term for a relationship where one boy (Langa) went through episodes without feeling anything in his heart about something he used to enjoy until the other boy (Reki) was there to see him.

The fact that they now have a constant way to remind themselves that they’re in this together, forever, just adds a dump truck’s worth of feelings to a ship I was already a fan of.

Yet somehow, the finale managed to add even more text to the subtext.

So let’s hash out the final beef.

First things first, these two truly live in their own universe. Despite the severity of the matches they’ve taken part in, they often focus on the fun they have when skateboarding. Everyone else around them will point out how dangerous Adam is, but these two, legitimately, sit by themselves and focus on how much they enjoy each other’s company. From a shipping standpoint, it’s adorable, but beyond the fandom lens, it’s also a nice message to have in a sports anime. In a genre that can be extremely competitive, these two characters always take things back to basics.

Skateboarding is fun, and it’s fun to do around people you like spending time with.

Langa lost sight of this with the death of his father. While that had been snowboarding, skateboarding has similar notes. We’ve been told throughout the series, via Langa’s mother, that he was basically a shell of his former self after his dad died. However, the closer he got to Reki, the more alive he became.

It takes him a minute to realize that it’s Reki that does this. Back in episode 7 (their big fight) he thought Reki would be able to understand why he’d want to go up against Adam, an amazing skater. Reki didn’t get it at all because Adam is terrifying, his skateboarding twisted, and hurtful. When Reki says that Adam and Langa are similar, therefore, there’s no place for him, Langa realizes the mistake he made – something he points out in episode 11 with his broken skateboard, how he realizes things too late.

After episodes of Langa lifelessly walking around, he’s re-energized because Reki’s back. Reki feels the same way, because he’d also been wandering around aimlessly without Langa. So as ridiculous as it seems for these two to be in the backseat reminiscing about moments they shared before Langa’s final beef with Adam, it actually makes sense that the two characters who live by a very carefree “fun with each other is what matters most” attitude wouldn’t be too concerned about the impending doom.

So the beef starts, Reki blowing out his lungs from how much he’s screaming for Langa. At one point, Langa losses sight of what’s important because he’s falling under Adam’s hypnotic, toxic influence. Fortunately, when things are completely void of color, Langa sees a personal message Reki wrote on his board.

This is both a vital reminder and precious callback as the two had a scene back in episode eleven where Langa taught Reki the English word “Fun” when Reki got it mixed up with the word “Fan.” Langa wrote the word out for Reki, and now Reki has written that word on Langa’s new skateboard.

This means Reki took the time to figure out how to write in English, which isn’t his native language, but he knew he needed to put that word on the skateboard and he wrote it in a way that Langa would understand.

Langa, once he smashes through the nothingness of Adam’s void, not only manages to do a patented “let me heal your heart with kindness” anime protagonist move on his opponent, he wins the beef! He actually doesn’t notice, not right away, because as soon as he sees Reki waiting for him at the finish line he flings himself into his arms. This is a great callback to when Reki flung himself into Langa’s arms when he won against Miya back in episode three. Langa, back then, had looked a bit meh about the affection, but now he’s jumping off his skateboard to shower Reki with affection.

I also have to point out how Reki left the group to RUN to the finish line like some kind of romantic “chasing you in the airport” scene so he could be there to greet Langa. I honestly think that the outcome wouldn’t have mattered to either of them. Had Langa lost, Reki would’ve still been at the end of the finish line and Langa would’ve been satisfied with that, after all, back in episode eleven, Reki lost and didn’t give a shit because he had so much fun and Langa was there to see it (especially since Reki, while skateboarding, was inspired by Langa to try new tricks). For Langa, and Reki, it was never about winning or losing, it was about supporting each other and having fun together.

I’m gonna take two seconds to navigate away from shipping to say how much I appreciate a series whose entire point is, “It’s okay to enjoy things just cuz.” The only thing gained from all of this is happiness, especially for Langa. This might sound odd, but it’s actually difficult to figure out something to do where you gain nothing but self-satisfaction.

We’re often told to do something useful, or if we are doing something “for fun,” we’re given tips on how to make something more out of it. Usually, in sports anime, there’s something tangible earned at the end of the day. Yes, the characters are having fun, but they’re also competing in tournaments and gaining notoriety in their sport. There’s nothing wrong with that, but on the flip side, there’s also nothing wrong with taking part in something because you feel like it. Period.

This is further illustrated when Langa visits his father’s grave, skateboard in hand. We don’t get to hear the conversation, but from how happy his mother looks, we can at least guess that Langa’s telling his dad that he found something he enjoys again. That’s what snowboarding was, and that’s what skateboarding is.

But wait, I say as the credits come to an end, there’s so much more.

For this last part, we have to go back to the beginning of the series, back when Reki had his monologue about happiness. Back then, he talked about how he saw a show where a hero asked what true happiness is, haunted by the fact that he may never find the answer. Reki thought it was messed up to ask this kind of question, especially in a show aimed at kids, then proceeded to go through a list of possible answers (getting rich, getting into good schools, etc.) Clearly, what got Reki going was skateboarding, and we see him skating alone before meeting up with Manager Oka to head to S.

The reason why we had to go back to episode one is that this scene is how the entire season ends, only this time, it’s in Langa’s point of view. Langa tells us that Reki actually told him this story, and as he has his own monologue, we get a near-perfect replica of how Reki skated down the street, but it’s Langa now.

It’s even the same music playing.

Langa, initially, says that he didn’t get why Reki thought the “what is your happiness” question was scary, however, now that he’s dealt with being uncertain about his happiness, he has a better understanding of why it can be difficult to not know what makes you happy. However, Langa knows what his happiness is, the camera panning over to Reki so the two can have the rival match they wanted to have.

Langa equating happiness to Reki is just… aaaaah! Because it’s not just skateboarding that makes Langa happy, Reki HAS to be there, too.

And really, this was hidden in plain sight with the lyrics to the ending theme song and the swaying palm trees outlined in the colors of Reki and Langa’s hair.

In conclusion, Renga is a pure boost of serotonin. Even when having to go through their break-up (complete with longing glances and barely remembering to eat) it ends up being a wholesome ship with a wonderful message of having fun for the sake of having fun. That being said, don’t anyone DARE try and pull off some of their stunts, but do try and take time out to do something that makes you happy simply because it makes you happy.

Thank you, SK8 the Infinity.

In case you haven’t fallen headfirst into this ship, and this series, you can catch it over at Funimation.