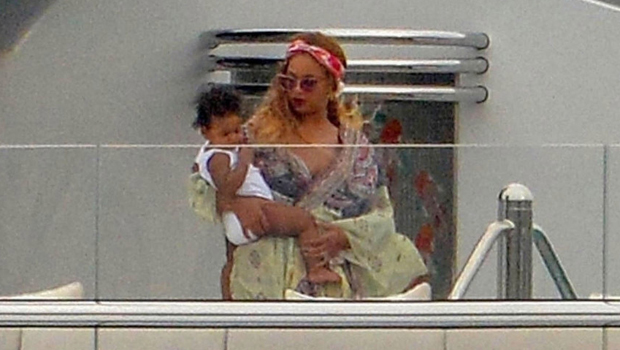 Beyonce enjoyed a beach day in Malibu with daughter Blue Ivy and 3-year-old twins Rumi and Sir in new photos she shared on March 31!

Beyoncé and Jay-Z‘s twins are growing up fast! On Wednesday, the 28-time Grammy-winner shared a series of family photos to Instagram that showed off her Malibu day date with daughter Blue Ivy Carter, 9, and twins Rumi and Sir Carter, 3. The proud mom and her brood, who appeared to be without husband/father Jay-Z, treated her little ones to a beach day and a meal at celeb hotspot, Nobu.

Bey’s latest Instagram upload includes two separate snaps of Rumi and Sir, who the protective mom captured from behind, in order to conceal their identities. The singer has been extremely private about sharing photos and videos of her and Jay’s twins. Other snaps showed Bey making a duckface with her eldest daughter, who donned straight hair and blue-framed glasses during the outing — along with a snap of the duo’s beautifully manicured hands. Additionally, Beyonce left her post caption-less, much like her other Instagram uploads.

Bey’s sweet family photos followed the “Already” singer’s eight (yes, eight) stunning glam shots in a full-on denim look. In two separate IG posts, she posed in an argyle jean jacket and matching skirt, which included a thick white belt with a number of dangling gold chains. Bey bared her toned tummy in a cropped white tank and flexed her leg muscles in a pair of pointed stilettos. She accessorized with a black Chanel mini bag, rectangle shades and a plethora of diamond jewelry.

The Carter family’s Malibu outing comes just two weeks after they took over the Grammy Awards in LA on March 14. Blue won her first-ever Grammy for in the Best Music Video category, for her appearance in the visual for her mom’s song, “Brown Skin Girl” — which is featured on The Lion King: The Gift soundtrack.

Meanwhile, Beyonce won four Grammy at the 63rd annual show, bringing her total Grammy wins to 28 — the most that ANY artist has ever won (conductor Georg Solti still holds the all-time record with 31 awards). Bey and Jay were on hand at the ceremony, where the singer even took to stage with collaborator Megan Thee Stallion to accept the Grammy for Best Rap Performance for their hit “Savage.” The win marked the rapper’s first-ever Grammy.