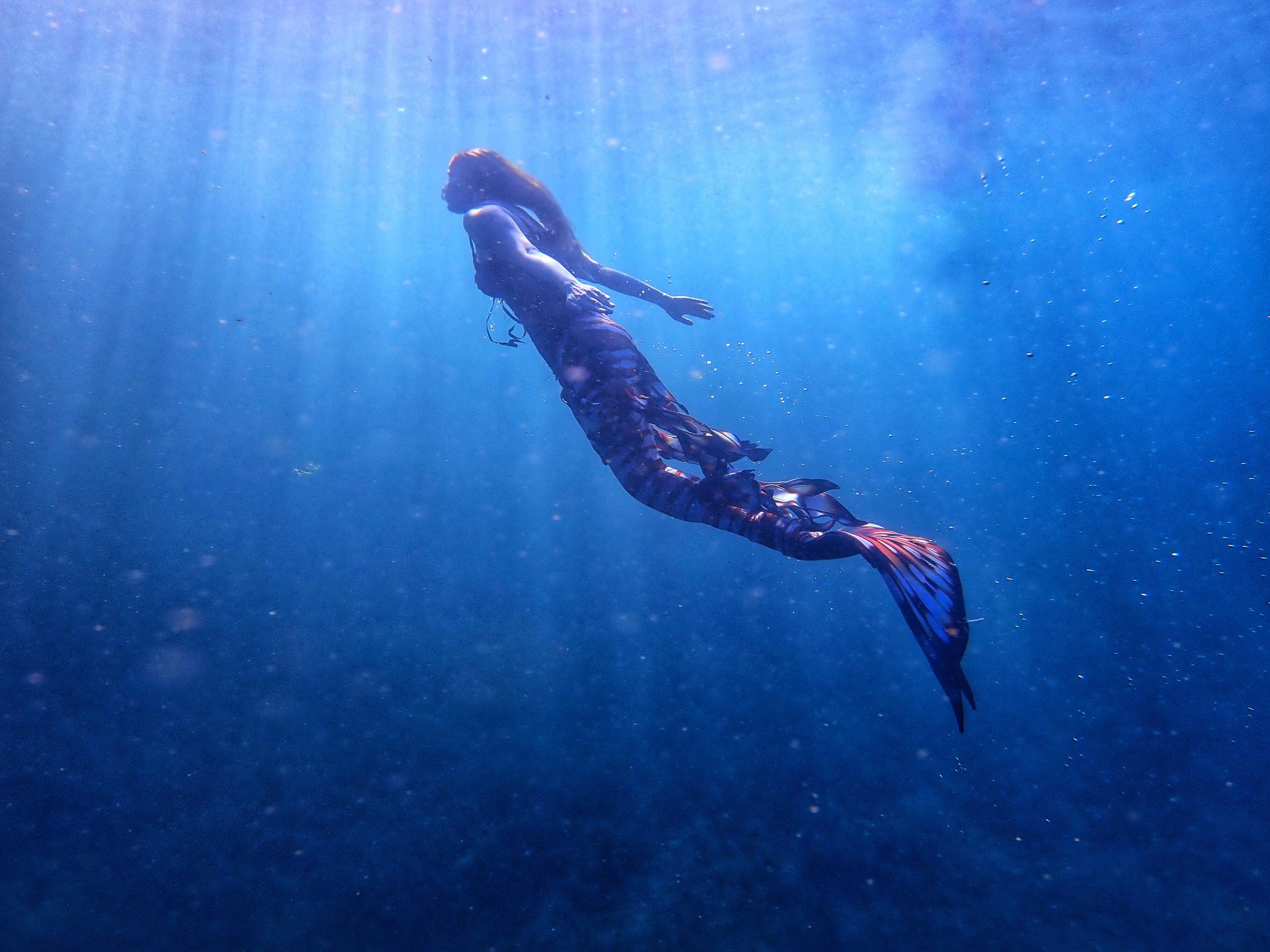 Aura Stiers and Cyrus Rhodes’ Mermaid – A Dream Made Real is an unique combination of poetry and photography that explores themes of mythology, ecological awareness, and self-examination. It is an affirmative work, universally upbeat despite recognizing life’s obstacles, and ultimately triumphant.

Those components are integral to the book’s success. Some readers may quickly sweep through the book’s photos, all of them depicting Stiers wearing a variety of mermaid tails and find it to be too far afield of their everyday concerns. If they choose to stick with the book, however, they will likely quickly change their mind.

Stiers uses the mermaid mythology as an imaginative vehicle for delving into personal concerns such as the interconnectedness we experience with loved ones, the natural world, and our relationship to self. It also works as an effective way of looking at the world at large. Some of the poems and prose pieces, such as “Under Deep”, “She Watches in the Distance”, “Mermaid in the Falls”, “Emerald City Mermaid”, and the finale “Phantom by the Waterfall” are the finest written works incorporated into the book. The elemental themes of works such as “The Fire Dragon Mermaid” and “The Scarlet Mermaid” are highlights as well.

She has an enormous talent for meshing passages of immense vulnerability alongside well-observed imagery. Moreover, Stiers moves with fleet-footed skill between formal poetry and less structured pieces; her confidence handling these varying forms never wavers. Anyone from those well-versed reading poetry and others without much experience in the genre will both find it effective.

Rhodes is especially valuable thanks to his keen eye and the obvious superior camera work that portrays Stiers in the most compelling fashion. He is a first rate creative partner for Stiers, they share an artistic vision sympathetic to one another’s goals, and the uniformity of the written and visual presentation displays no visible holes. There is no filler in this book. Even the two bonus chapters added to the text are not extraneous.

It isn’t a long book. Longtime readers can get through this book in a single sitting and it is the sort of volume that invites multiple re-readings. Their choices for settings are wonderful. The vast majority of the pictures are taken in state and national parks and aquatic imagery dominates the text, though there are exceptions. There are, undoubtedly, many pictures they chose not to use and their unerring instincts for picking the appropriate photos is another highlight of the book.

Mermaid – A Dream Made Real makes for an excellent counterbalance against the grim and disorienting year plus we have experienced. The shadow of COVID-19, for now, hangs over the work, but there’s no succumbing to feelings of helplessness and despair. Mermaid, instead, offers a steady and lyrical rebuke to those traps of helplessness and despair. It encourages readers to look within and realize their potential rather than accepting defeat. We need messages like this more than ever, on a personal level, and humanity at large. Let’s embrace the riches of this book and hope we hear more from this winning team.