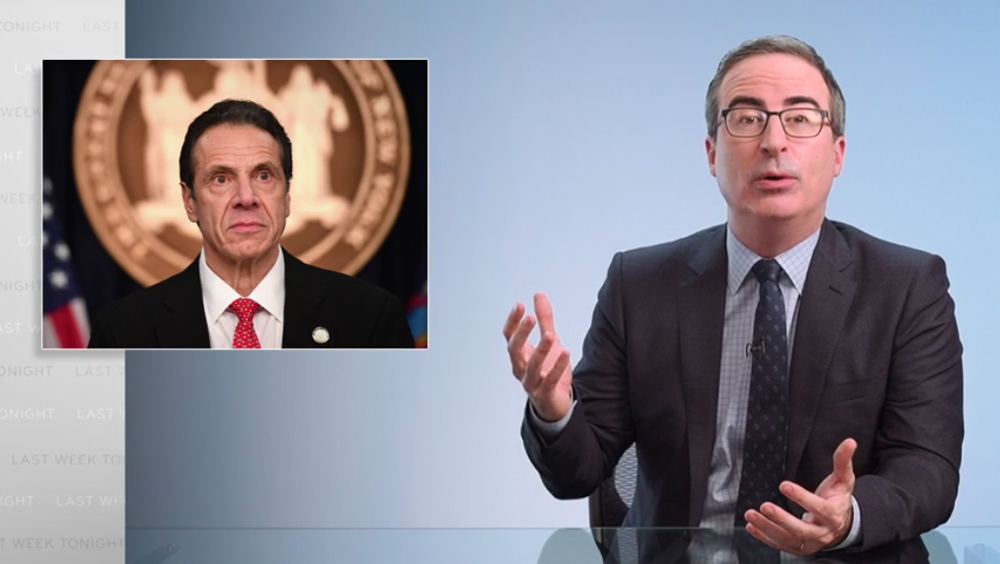 Andrew Cuomo went through some things this week so considering Last Week Tonight wanted to keep things hyper local on Sunday night, John Oliver decided to unpack some of the scandals facing the New York Governor who he describes as a man whose face, build and general demeanor always seem to scream “Business Frankenstein”.

Recently, Cuomo’s administration has been under fire for how it has been handling Covid-related fatality data at nursing homes. In a 76-page report from New York’s attorney general, it says that they have been under-reporting deaths at nursing homes by as much as 50%.

This scandal stems from a directive Cuomo made in March, telling nursing homes to accept Covid-positive patients to free up hospital beds.

“That would be bad enough but since then, his administration has tried to downplay any consequences of that action,” said Oliver. He also said that they released a report last July that basically blamed nursing home staffers for infecting residents. Cuomo’s aide recently told lawmakers, they were actively concealing data on Covid deaths out of fear it’d be used against them by federal prosecutors.

This caused some huge problems and after a Democratic legislator, Ron Kim made a statement about it to press, Cuomo wasn’t happy about it. Oliver cut to a clip where Kim was told to cover up the cover up and that Cuomo berated him. The governor has since denied that call with Kim. However, Oliver points out that people who have dealt with Cuomo in the past said it sounds exactly like him.

“Cuomo is famously unpleasant,” stated Oliver. “He reportedly has a ‘do-not-yell-at list’ which a former aide apparently admitted is very small and just this week, a different former aide accused him of sexual harassment, a claim he denies.”

“Even before the current scandals, there was something gross about Cuomo’s glee in his public adulation last year,” said Oliver, who cited even more examples including Cuomo’s appearances with his brother on CNN, his co-signing of the term “cuomosexuals” and a book he published last October about the lessons he learned from the still ongoing pandemic.

During press conferences in the past, Oliver mentions that Cuomo loves to lean heavily on facts and quotes, specifically from a man named A.J. Parkinson — a man who doesn’t exist.

Oliver said that Parkinson doesn’t exist because he was made up by Cuomo’s fathter, former governor and “Kevin Spacey cosplayer” Mario Cuomo. Turns out that the name “A.J. Parkinson” was an inside joke between Mario Cuomo and press. “Although that may have been charming at the time, the current Cuomo doint it during a pandemic when virtually no one gets that it a joke is a pretty weird move,” said Oliver.

He goes on to say that Cuomo circulating fake quotes isn’t the worse thing that he has done. “But it does feel like a pretty apt metaphor for an administration that has aggressively managed facts to fit its chosen reality,” said Oliver

All of this reminded Oliver of an insightful saying which he shares: “Andrew Cuomo is a colossal a**hole,” said Oliver, adding it’s from an excellent writer named T.J. Pimpernickle.

“I can tell you two things about T.J. Pimpernickle,” shares Oliver. “One, he is a person I totally made up and two, he’s also completely right about Andrew Cuomo.”