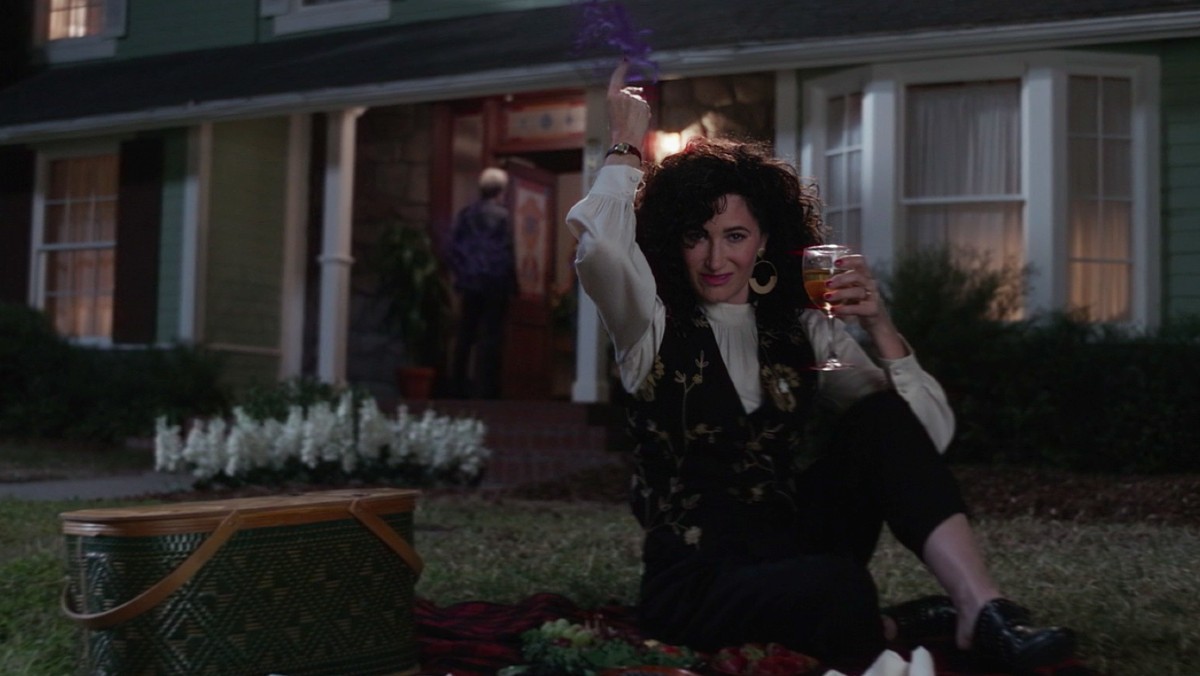 Let’s talk about WandaVision’s Agatha, now that we know more about her.

** Spoilers for WandaVision‘s “Previously On” lie within.**

Agatha Harkness has been around for a long time, not just in the life of Wanda Maximoff but in general, and this week’s episode of Marvel’s WandaVision showed us her struggle for power and the life she’s led.

This week’s WandaVision opens in Salem, Massachusetts. Forcing us into believing that Agatha Harkness was going to be a victim of the Salem Witch Trials. But quickly we realize that she’s on trial by her own coven for the work she’s doing against their rules.

In a show of Agatha’s power, she takes on her entire coven and drains them all of their power, including her own mother. All of this just to show that a) Agatha has been around for hundreds of years and b) Agatha isn’t one to shy away from powerful beings. If anything, she wants to take that power for herself.

So it makes sense that she was drawn to Westview in the first place. A powerful being turned an entire town into a sitcom reality? Agatha seems to think it’s a draw to witches like her, but as she follows Wanda through her trauma, trying to unpack how this magic came to be, she’s slowly realizing that Wanda’s powers don’t stem from hexes and spells.

When Wanda enters Agatha’s basement, she thinks she can use her powers on her, unaware of the protection spells and magic littering Agatha’s runes.

Agatha doesn’t let Wanda’s apparent misunderstanding sway her. She’s focused on making Wanda relive the trauma that led her to Westview, telling her that they were going to go through some “real” reruns now. And it makes me wonder if Agatha knew that Wanda was the Scarlet Witch all along.

As Wanda continues to cope with her past, Agatha is trying to figure out whether Wanda created this world with a spell or something else entirely, and as she’s working through her theories about Wanda (Agatha Harkness really is just like the rest of us), she begins to see that Wanda’s powers aren’t something that comes from a spell or enchantment. Instead, they come from within Wanda, and we finally get the reveal of Wanda’s Scarlet Witch nomenclature.

In the beginning of this episode, Agatha’s lust for power was shown by her willingness to take the lives of her entire coven. By the end of the episode, she was holding Wanda’s twins captive and explaining Wanda’s powers to her, and while Agatha could be changing her tune and willing to learn from and help Wanda grow, I think Agatha is going to try to manifest the powers of the Scarlet Witch and quickly learn that it is high above her abilities to deal with the powers of the Infinity Stones.

Whatever Agatha has cooked up for Wanda, she clearly knows about the chaos magic that Wanda uses to manipulate realities. I just still don’t trust her and what she’s going to do to Wanda Maximoff.