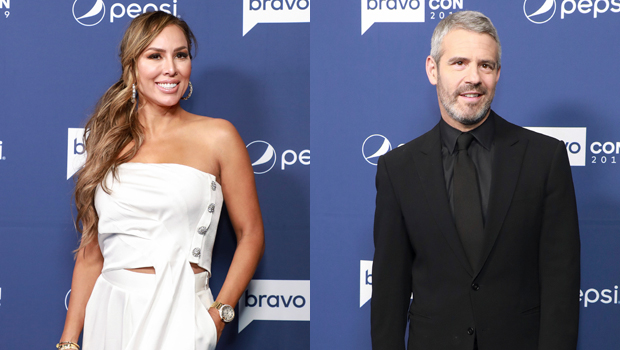 Kelly Dodd and Andy Cohen butted heads on part one of the ‘RHOC’ reunion, which aired on Jan. 20. Andy grilled Kelly about her COVID-19 statements, while Kelly said her fans think Andy is ‘Anti-American.’

Tensions were high between Kelly Dodd, 45, and Andy Cohen, 52, when the subject turned to the coronavirus pandemic on part one of The Real Housewives of Orange County on Jan. 20. Kelly has sparked one controversy after the other for her insensitive comments about the pandemic, and Andy wanted to hear Kelly’s thoughts about wearing masks now that they were face-to-face.

“I hate wearing a mask, I think everyone’s on that with me,” Kelly admitted. “I will wear them because I have to. Does your pants protect you from a fart? Are the masks helping? I don’t know.” This led Andy to point out that he’s been receiving messages from fans who think the RHOC star is taking the pandemic too lightly, and so the Kelly backtracked by saying, “I feel bad for anyone who lost loved ones, I think it’s horrific, I think it’s horrible. Did I take it seriously? Yeah. But I also was frustrated.”

Andy persisted. “Your behavior has really outraged people,” the RHOC executive producer added, but Kelly didn’t seem to think this was hurting her fame. “My fan base is building, I haven’t lost any followers,” she insisted. This didn’t satisfy Andy, who added, “I mean, the amount of messages that I get that you’re uneducated, you’re putting out misinformation, you’re behaving like a moron.”

Kelly Dodd hangs out mask-less with friends in this Oct. 2020 post. (Courtesy of Instagram/@kellyddodd)

Instead of apologizing, Kelly decided to fight back by claiming she has received unfavorable messages about Andy as well. “I get them too, saying that you’re anti-American, that you put your political beliefs out there,  that they don’t want to watch a political show,” Kelly retorted. This caught Andy by surprise, who asked if Kelly’s fans think he’s “anti-American” just because he doesn’t “like Donald Trump.” Kelly confirmed that’s exactly what she meant.

The subject then turned back to Kelly’s social media posts about the pandemic. Andy wanted to know if Kelly ever took a minute to wonder if she shouldn’t post such things, and Kelly got defensive. “I feel like sh-t. I feel horribly and you’re making it worse,” she said.

Kelly Dodd and her bridal shower party faced backlash for not wearing masks in this photo, shared in Oct. 2020. (Courtesy of Instagram/@kellyddodd)

This isn’t the first time Andy has scolded Kelly for her remarks about the virus. On Watch What Happens Live with Andy Cohen in Dec. 2020, the talk show host asked if Kelly has “any remorse” for writing that the pandemic is “God’s way of thinning the herd” in an Instagram comment in April (Kelly later apologized for the remark via Twitter in May, but offered another apology on Andy’s show).

In May, Kelly also took to her Instagram Story while dining out and happily said, “No one is wearing masks here in Orange County. Yup, because no one is dying here of the virus.” During her appearance on WWHL, Kelly said that she was just “misinformed” at the time.