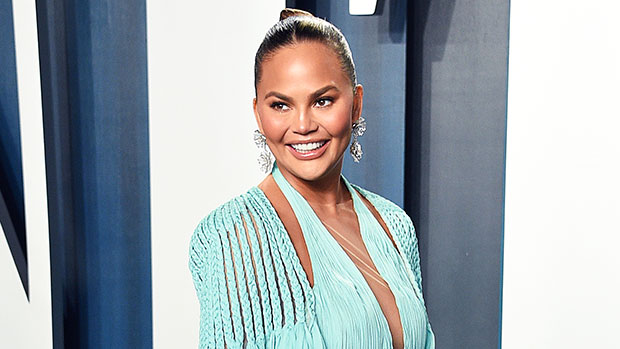 Chrissy Teigen is leaving Washington D.C. with one less tooth after a freak accident with a Fruit Roll-Up! The model documented the cringeworthy moment on social media and it looked painful to say the least.

After being “scolded” for spoiling the setting of her husband’s Inauguration Day performance, Chrissy Teigen managed to lose a tooth — out of all things. The Cravings author, 35, took to Instagram and Twitter on Wednesday night to reveal “I just lost a tooth in a Fruit Roll-Up,” in a quick 8-second clip. Meanwhile, Chrissy captured herself holding her tooth, which was stuck to the red, chewy candy.

In true Chrissy fashion, she wrote, “welp,” in her caption on Twitter. She even engaged with one fan who asked if the tooth she lost was a “real tooth or a cap or veneer?” Fortunately, the mother of two revealed she had lost a cap, and not her actual tooth. Yet, the loss is just as painful for Chrissy, who admitted, “I loved him like he was a real tooth.”

Chrissy didn’t divulge any further information about her tooth — whether it was a painful experience, or which tooth exactly fell out. But, she didn’t let the freak accident ruin her night, where she watched her husband John Legend perform at President Joe Biden’s Celebrating America inauguration event. The Grammy-winning singer sang a stunning rendition of “Feeling Good” — Nina Simone‘s 1965 hit — while he played piano near the Lincoln Memorial. Other performers included Demi Lovato and Justin Timberlake.

Chrissy, whose disdain for President Donald Trump is no secret, made sure to document her inauguration weekend in Washington. Ahead of John’s performance, the model admitted to being “scolded” for sharing behind-the-scenes videos her husband’s pre-inauguration rehearsals.

“LMAO apparently that was all supposed to be a secret and i got scolded so act surprised tomorrow I’m crying,” she wrote on Twitter. Though, Chrissy redeemed herself when the POTUS account finally unblocked her on Twitter. The latter moment, which Chrissy celebrated on Twitter, occurred after she asked President Biden to follower her now that Trump (who had previously blocked her) is no longer president.

“OH MY GOD !!!!!!!!!!” she wrote in response to her new follower. “My heart oh my god lmao I can finally see the president’s tweets and they probably won’t be unhinged.”