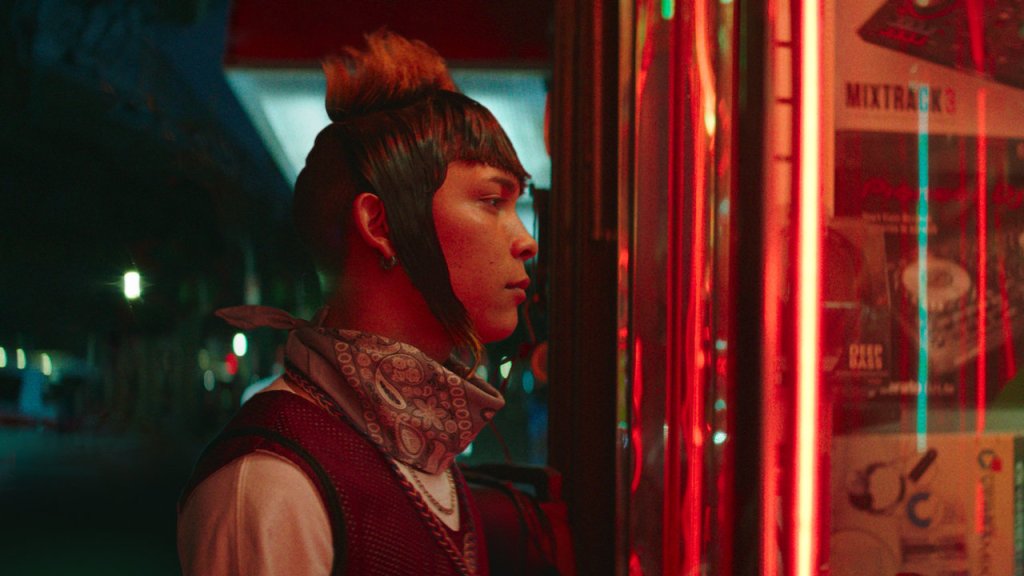 Mexico’s entry to the International Feature Film Oscar race, Fernando Frias’ I’m No Longer Here (Ya No Estoy Aqui), is an ultra-skillful, if sometimes dramatically undernourished account of an enterprising teenager’s attempt to move beyond a life on the streets.

There’s no question that the young director knows what he’s doing behind the camera, and it’s no surprise Mexican cinema titans Alfonso Cuaron and Guillermo del Toro have been actively promoting him and the film. It’s been on Netflix since May and world premiered at the Morelia Film Festival several months before that, but we wanted to give a fresh look.

Frias has smarts and style to burn; every shot has been composed with great poise and confidence, and he cranks everything up to get the most out of every moment. He’s a guy who was clearly born to make movies.

It’s a flashy film initially set on the very mean streets of Monterrey, where 17-year-old Ulises (Juan Daniel Garcia) and his posse strut their stuff, speak in special slang and mess around while sporting an extreme, black-and-copper helmet hair style that features a shaved back of the head with long strands along the chin. He’s too cool for school — literally.

But adverse circumstances land Ulises in Queens, New York, where, despite barely speaking a word of English (and not really trying), he enters into a quasi-relationship with a local Chinese girl, who’s more eager than he is.

Basically, Ulises dead-ends in both worlds, as he simply doesn’t try as hard and conscientiously as do young immigrants you’ve seen in many other films and TV shows. He’s closed off and up, and Ulises, for all his style and desire not to be dead-ended by gang life, is simply not as varied or interesting enough as he needs to be to carry the film; he could use a good dose of his namesake’s adventurousness. The New York interludes, in particular, never really jell or come to full life.

It’s an engaging and highly accomplished film but, as an immigrant tale that also sees its protagonists make the move from Mexico to New York, it doesn’t measure up to Heidi Ewing’s keenly sensitive and insightful I Carry You with Me, a major discovery at last year’s Sundance.