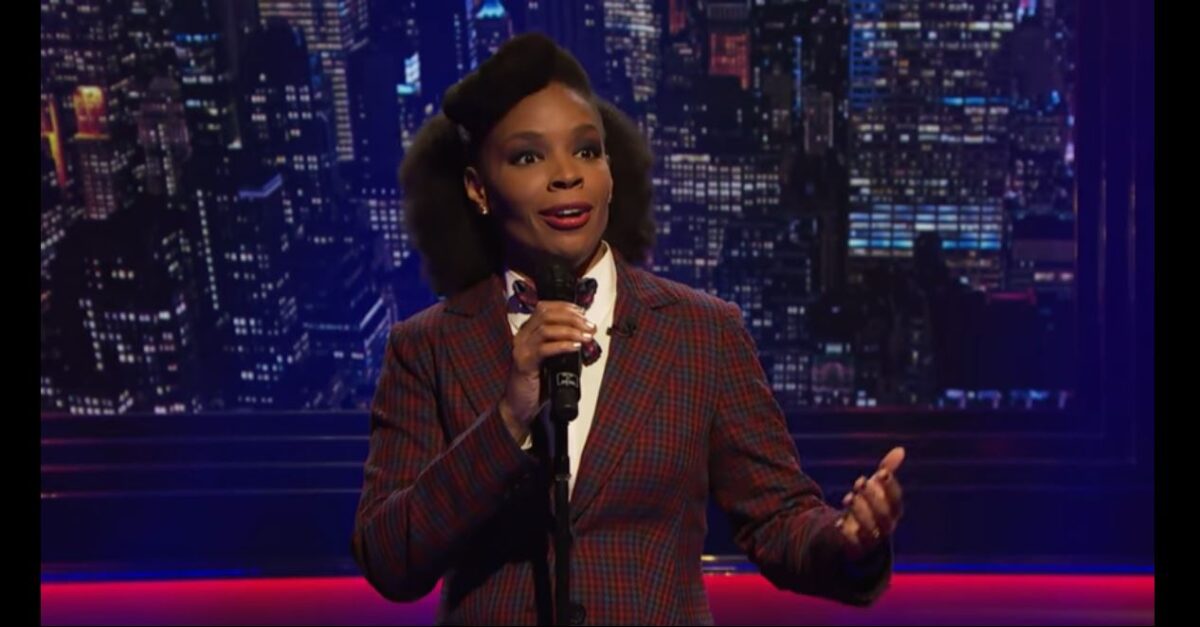 If you haven’t been watching The Amber Ruffin Show on NBC’s streaming app Peacock, you’re missing out. Comedic powerhouse Amber Ruffin, who has been entertaining us for years on Late Night with Seth Meyers, launched her solo show last year to critical acclaim, and it’s easy to see why. Ruffin’s natural charisma and incisive yet silly sense of humor have already set her apart from the other late night hosts.

Ruffin’s show returned in the wake of the violent insurrection on the Capitol, and her coverage of the attack has been both funny and insightful. But it’s in her songs where she really shines. Along with writer Tarik Davis, Ruffin performed “White Supremacists Facing Consequences Fills Me With Joy”, where she delves into the delicious schadenfreude of watching the insurrectionists getting arrested and kicked off of planes. “I am filled with joy, and a little bit of shame—but mostly so much joy,” they sing, as the domestic terrorists who attacked the Capitol melt down in the face of their own consequences.

Ruffin also took republicans to task for their insincere calls to unite the country in “Despite Everything That’s Happened, Let’s Unite!”, where Ruffin sings, “I believe we can come together and heal this rift/even though if I married your son you would jump off a cliff, let’s unite!”

Ruffin able captures the frustration and rage that many of us are feeling right now, and the fact that she is able to channel it through humor is an awesome display of just how talented she is.

We’re ready for an island adventure 🌴 #ColourPopxAnimalCrossing available on 01/28 at 10am pst on https://t.co/5C9dbsi9Af! pic.twitter.com/Qor6RBQHKH

this tiktok of a man watching Once More With Feeling for the first time not even knowing there’s a Buffy musical episode…i love the youth pic.twitter.com/zZMyxl73qk

Only 4 more sleep til a new president!

New York’s Indie Theaters to Gov. Cuomo: Not So Fast!
Dr. Dre Trashes Estranged Wife Nicole in Preview of New Song
Jennifer Lopez Gave an Intimate Look Inside Her Twins Emme and Max’s 13th Birthday
Mila Kunis Is Set to Star in Your Next Favorite Netflix Thriller
I Care A Lot Ending: Do The Final Twists And Turns Satisfy?