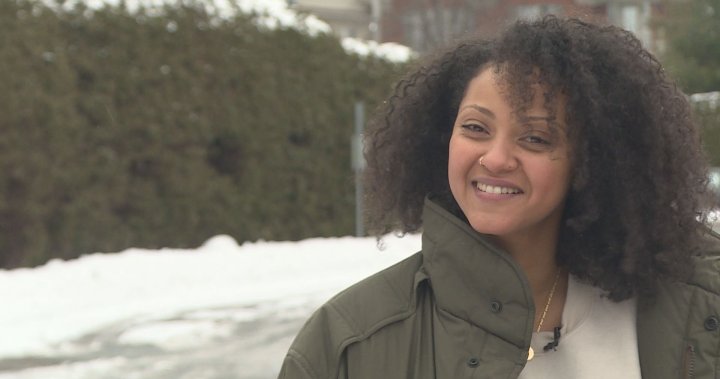 NDG’s Naya Ali has become one of the inaugural winners of the SOCAN Foundation’s SiriusXM Black Canadian Music Awards.

It’s the latest accomplishment in her quickly rising career.

“It’s been wild. I think even towards the end of this past year, things have been moving a lot faster,” Ali told Global News in an interview.

She was born in Ethiopia and came to Montreal with her mother when she was a toddler. Ali says her upbringing in NDG contributed to piquing her interest in becoming a rapper.

“When you know, you know! It’s a great, great area, and a great area for the arts,” she said.

Ali may be coming out with polished music and visually striking videos now, but the 32-year-old’s path to stardom was a winding one. One of the early stops was the NDG YMCA, where in her early teens she’d watch yearly shows put on by rappers from the community.

“There was a buzz. There was an NDG buzz and I always used to, you know, want to be part of it. But I didn’t know how,” she said.

She started writing poetry and rapping, but by her early 20s she had given up the dream.

“I didn’t think it was viable,” she said. “I just focused on school and focused on going to Concordia and McGill and then I worked in marketing.”

She says wasn’t happy. Working an office job, it became clear what she really wanted to do.

“While I was doing my nine to five, I would get home and from six to 12 I’d work on my music,” she recounted.

She released her first-ever single Rara in 2017, and quickly got noticed.

“That’s how I got my manager, and then it just started snowballing by itself. For me, that was a confirmation, so I just trusted the process and worked harder,” she said.

Since then, her momentum has only grown, and this week became one of five winners of the first-ever Black Canadian Music Awards. The goal of the honour is to propel budding Black talent forward. A jury of 10 Black artists and music industry leaders picked her.

“We can’t deny the many systematic barriers that artists face, especially Black artists, and so we have a responsibility to play our role we all do in the industry,” said Charlie Wall-Andrews, executive director of the SOCAN Foundation.

She said the jury did not take the decisions lightly, and reviewed hundreds of submissions.

“Like all of the other winners, Naya really encompasses a unique spirit and has demonstrated momentum in innovation and creativity,” said Wall-Andrews.

Ali said the award way particularly special to her because she was chosen by peers in the music industry.

The second part of her album Godspeed is set to be released in 2021. Her ultimate goal is to follow in the footsteps of other Canadian hip-hop superstars and make it big in the U.S. and beyond.