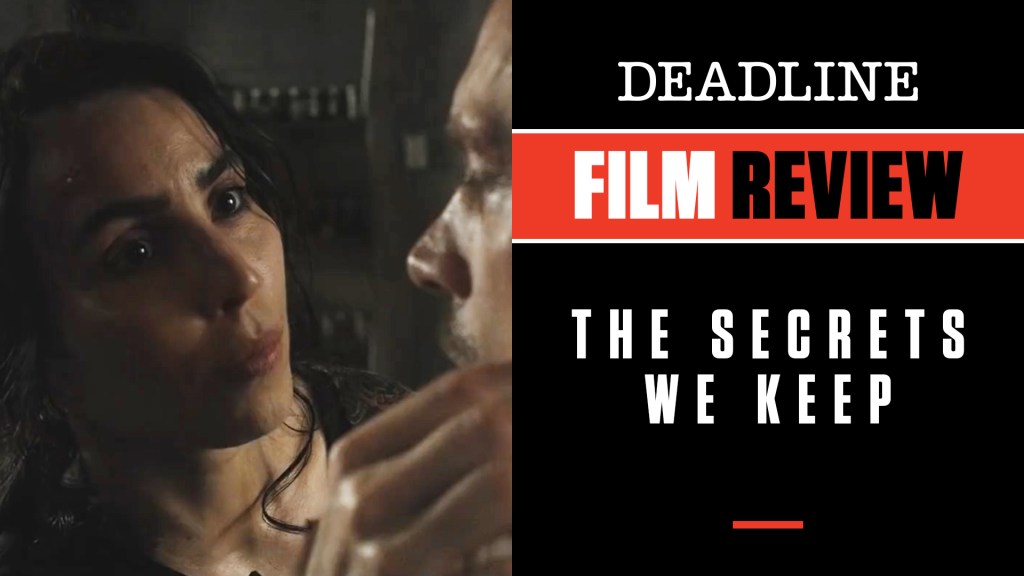 The Secrets We Keep is exactly what its title suggests, a tense drama dealing with characters whose darkest moments are kept hidden in memories buried in the past, but not forgotten. At least that is the case for the main protagonist, Maja (Noomi Rapace), who plays a Romanian Nazi concentration camp survivor seeking revenge for her horrific experience there 15 years after the war and the murder of a sister who was not so lucky to make it out alive.

This could easily be exploitation material, especially since director Yuval Adler and his co-writer Ryan Covington know how to skillfully ratchet up the suspense and thriller elements of the plot. But fortunately, it is not at the expense of some deadly serious subject matter and an interesting take on the part revenge and violence plays in trying to escape from our pasts. The Secrets We Keep examines the moral consequences and choices we make in how we conduct our lives, both past, present, and hopefully into the future.

Set in small-town America in the early ’60s, Maja is now happily married to an American, Lewis (Chris Messina), with a young son. It seems like an idyllic suburban life until one day, while in town, a chance sighting of a man walking down the street sends her world into a tailspin. She becomes increasingly convinced this man is indeed Karl, the Nazi officer who tortured and raped her, and killed her sister among others when they were prisoners in a Nazi concentration camp during the war. Taking matters into her own hands, after keeping those sordid details of her past from her current life, Maja stalks the man who says his name is actually Thomas (Joel Kinnaman in an explosive performance) who is happily married to his wife (Amy Seimetz) with a family of his own. She kidnaps him, forces him into the trunk of her car, drags him into her home and into the basement where she keeps him tied up.

You might imagine this causes a bit of strain with her husband, who is trying to be supportive and finds it hard to understand why this guy is in his basement. Thomas consistently denies he is who she says he is, and Lewis even comes up with some research to back up his claims, a move that puts strain on his marriage. Maja, managing to keep her son oblivious to all of this, refuses to believe anything other than her own truth as she increasingly becomes more obsessed, even to the point where she strikes up a friendship with Thomas’ wife in an effort to get more proof.

On the surface this is a superbly acted nail-biting thriller and serves as crackerjack entertainment on that level thanks to dedicated performances from Rapace and Kinnaman, whose cat-and-mouse game is fascinating to see play out. Is he or isn’t he — and who do we believe? It’s powerful stuff that works on a visceral level, an intelligently made drama with characters that pull you in. Rapace commands the screen here in her best role since playing Lisbeth Salander in the original Girl With the Dragon Tattoo trilogy. This is a pulse pounder that will keep you riveted to the screen wherever you see it.

Producers are Lorenzo di Bonaventura, Stuart Ford, Erik Howsam, Adam Riback and Greg Shapiro. Bleecker Street releases it today. Check out my video review above with scenes from the film.

Do you plan to see The Secrets We Keep? Let us know what you think.