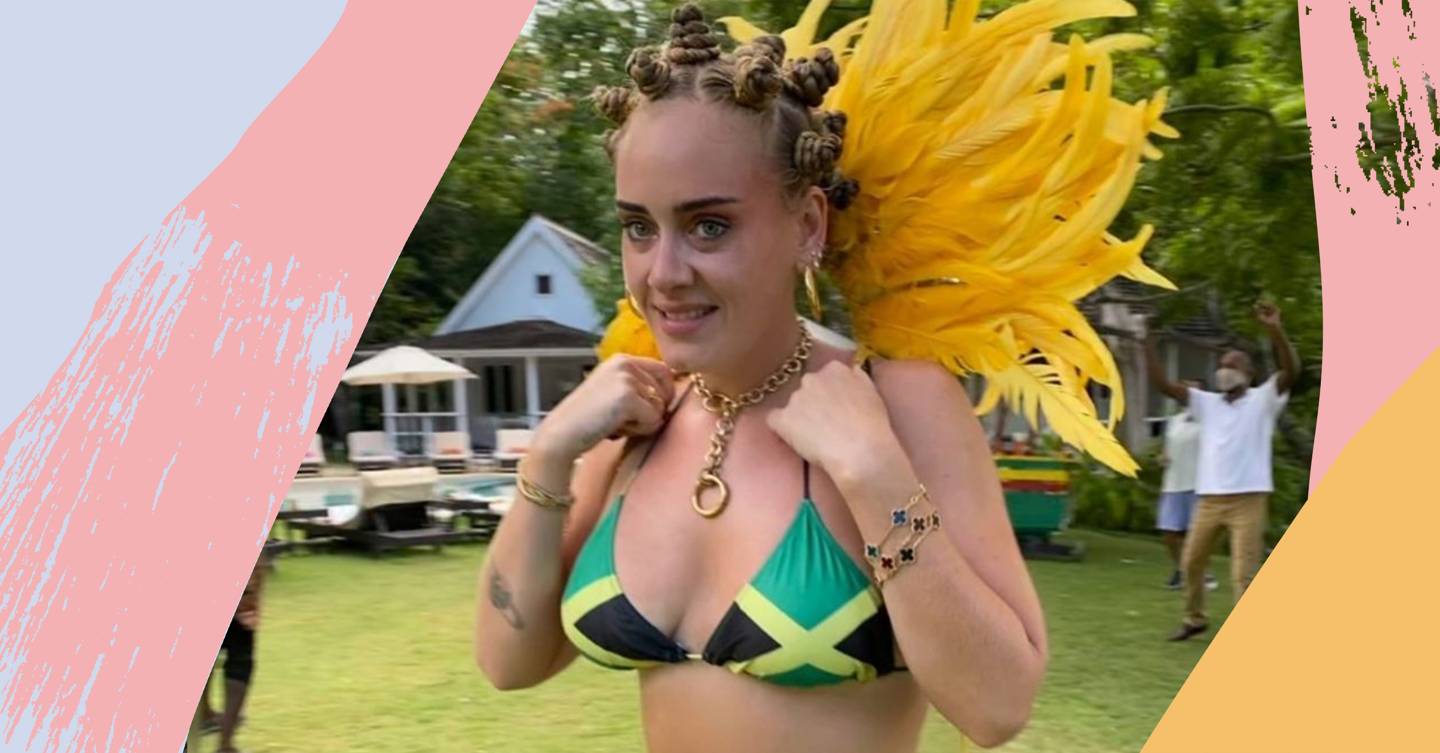 She’s received a huge backlash for cultural appropriation and blackfishing, the practice where white people (often celebrities) try and use the heat and power of black culture, or even try and look “black” in a disposable and disrespectful way. Others have been saying the star was trying to show her appreciation and love of Carnival. There’s a lot to unpack here in just one photo and people’s responses.

When I first saw the picture I thought ‘oh Rita Ora’s at it again’, as the star has been under fire for in my opinion trying to suck the coolness and heat of looking like a mixed heritage “Riri” style Caribbean pop princess when in fact her parents were 1990s immigrants fleeing the war in Kosovo.

Adele isn’t the first celeb to try and dip herself in some “black girl magic” with the Kardashian’s and their ever-evolving bodies, Kim’s braids and photoshopping to make herself look darker and many other influencers doing the same. As a black woman seeing Adele like this does make me raise an eyebrow. I can see why people could argue that she was trying to be respectful at an event celebrating black culture with her Bantu knots. However, her look left a bad taste in my mouth. Hair is much more than just a style, hair is status, power, culture, identity and so much more.

Hair is much more than just a style, hair is status, power, culture, identity and so much more.

I think what people can’t grasp is the cultural sensitivity around textured hair. I’m writing a book ‘Coils & Curls: The Ultimate Guide to Loving your Hair’ (out in March 2021, and available on iBooks and Amazon) because millions of POC like me have been totally estranged from their hair.

Slavery has left many nasty legacies that I still deal with today, which are both annoying and, at times, hurtful. As well as being trafficked and made into slaves, millions of the descendants of the stolen have also had centuries of passed down self-love, coil and curl loving ingredients and techniques stolen from us – and it’s only now these wounds are beginning to be recognised and healed.

A celebration of Black Beauty: The politics of black hair

As a Black woman in my early 40s with tight 4C coils inherited from my Nigerian father and Trinidadian mother, I’ve been made to feel and told that the natural way my hair grows from my head was “unprofessional”, “messy”, “crazy” “too big” and “ cool and funky”, never chic or beautiful it’s always been seen as just fun.

I knew I wouldn’t get on in my career with my hair, and doors are still literally closed in my face by suspicious-looking security guards. My hair is perceived as loser hair, the hair of slaves, and trouble. People in power just don’t look like me? How many people sitting in your companies boardrooms and workplaces look like me? Do you think it’s because out of the millions of Black people there’s no one qualified or because of centuries of unconscious bias and institutional racism?

My mum first chemically straightened my hair at the age of 8, so I would look “neat”. The experience was painful leaving me with both spiritual and literal scars, as the relaxer often left me with weeping scabs and burns on my scalp. It was a nasty habit I continued until I was 37. Why? Was it for fun, to look cute and show appreciation for a hair texture that isn’t natural to me? No. It was to assimilate and look less African and more like the perceived default setting of power. At 37, I gave up the “creamy crack” (otherwise known as chemical straightening my hair), as my 3-year-old twin daughters at the time told me that they could only be maids with curly hair. I had to set a better example for them by loving my own hair.

Many are arguing that Adele was showing appreciation for Carnival and Caribbean culture with her look but appreciation turns into appropriation when it’s worn as a party outfit and taken off again and deposed off. Especially, without understanding the context and history of that culture, hairstyle, and the fact Carnival was a celebration of the Windrush generation making England feel more like home.

Many are arguing that Adele was showing appreciation for Carnival and Caribbean culture with her look but appreciation turns into appropriation when it’s worn as a party outfit and taken off again and deposed off.

It’s appropriation when an Afro is worn as a joke and for fun at a stag do, when that same person wouldn’t be caught dead with it at a high powered board meeting at their office on Monday morning. Has Adele ever worn Bantu Knots to a red carpet event? Has she ever worn Bantu Knots on an Album cover or to a celeb party? Who did her Bantu Knots, was it a black stylist, does that or should that matter? I have spoken to many black hairstylists, who are often wheeled in to do curls and coils on pop stars and celebs and wheeled out again – whilst the white celebrity hairstylists take all the money and credit. In this light, do you feel Adele’s Bantu knots are exploitation on many levels?

I was fat-shamed on live TV by Edwina Currie, and then bombarded with racist hate by trolls

I read a quote saying all humans are assemblers, as everything in the world has already been done and it’s how we put things together which make us unique and original. I think Adele’s look wasn’t so much an assembly of art and appreciation but her trying to cute as a “black girl” at Carnival, from her big hoop earrings to the Jamaican flag bikini she wore. This look isn’t an assembly job she respects in her day to day life, but a thrown on fancy dress outfit.

When the Ghanaian British Vogue Editor, Edward Enninful, was racially profiled and told to use the loading bay when he arrived at work (the same publisher that publishes British Glamour) in his office at Vogue House in central London, just a couple of months ago, you know we still have a way to go on power and equality.

When some people see me, they see a descendant of a slave, a historical loser, and load me with all their prejudices and stereotypes

Artists like Adele need to understand the historical context and sensitivities around this topic and culture. I wondered if she had a black friend or colleague on her squad who could have advised her better. If they had they would have said like me, “don’t do it, girl”.

Britney Spears’ Dad Jamie Says He Hopes Her Conservatorship Comes To An ‘End’: I ‘Miss Her’
Kate Hudson Frosts Herself In Bvlgari at the 2021 Golden Globes
Kodak Black Granted Permission to Travel for Work While on Probation
‘Stargirl’ Star Grace VanderWaal Banking $375,000 for Disney+ Movies
Stella Banderas: 5 Things To Know About Melanie Griffith & Antonio’s Daughter After She Shares Crop Top Pic