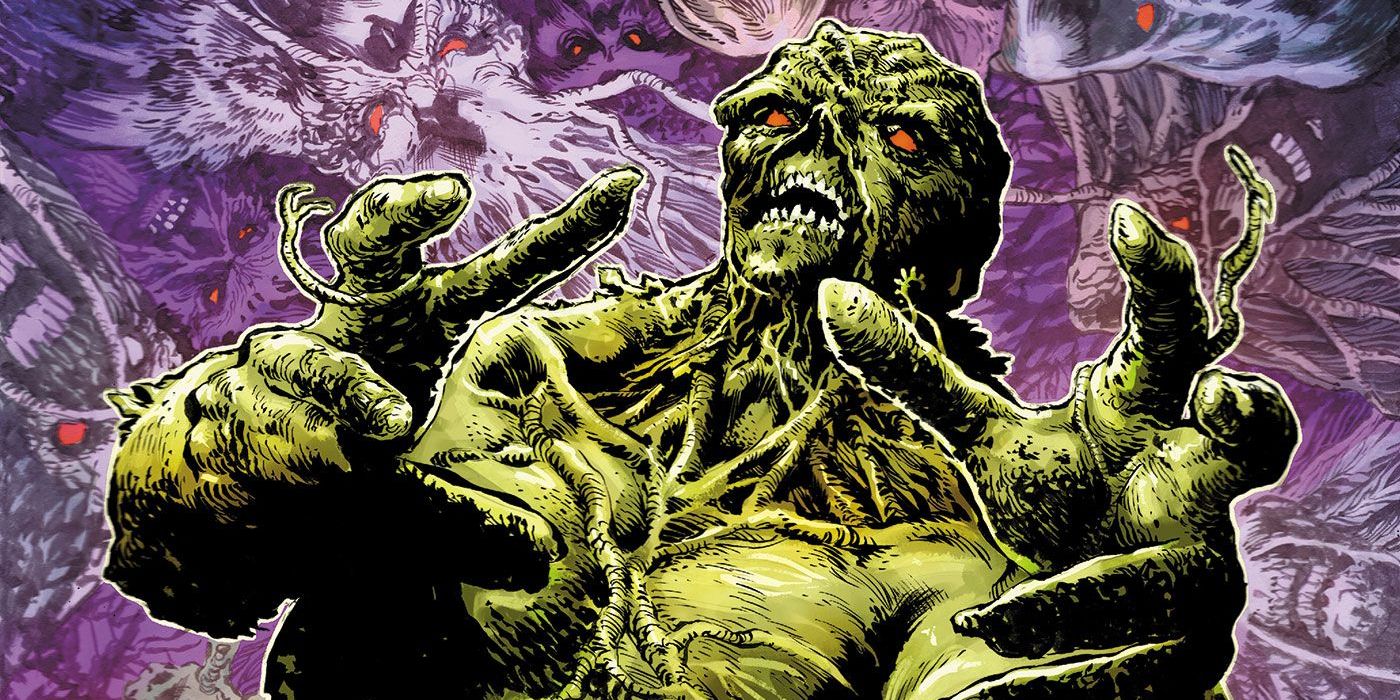 Bernie Wrightson and Len Wein’s green creation returns to print this Halloween for a 48-page one-shot titled Legend of the Swamp Thing Halloween Spectacular. Among the increased roll-out of new material being solicited as the comics industry tries to move past the COVID-19 pandemic, DC Comics’ 2020 Halloween plans appear right on track because this and their other eerie offering DC: The Doomed and the Damned are both scheduled to arrive by mid-October.

Swamp Thing was created all the way back during the Spring of 1971 in the pages of DC’s horror anthology comic-book series House of Secrets #92. In its inception, the story had a very gothic early-20th Century setting but when the character was selected for a multiple-award-winning ongoing series the next year, the lore was altered heavily by making the story contemporary and renaming the monster pre-transformation. When the series was revived in 1982, further new directions were explored. The new writer of this second, similarly-multiple-award-winning, series. was Alan Moore. He expanded the character’s origin to establish that different “Swamp Things” had existed throughout Earth’s history.

Related: DC’s Swamp Thing Once Made a Town Out of… Himself?

One of the latest in a long line of specials and one-shots featuring the swamp creature from DC Comics, Legend of the Swamp Thing Halloween Spectacular, is set for this October. Featuring a strong variety of names from Vita Ayala to Tom King on scripting and Emma Ríos to Christian Ward bringing it to life with art, the one-shot is sure to be a showcase of DC’s stable of talented and newer creators as well as the nearly infinite incarnations of the brooding horror monster. Ward has shared his take on the elemental avatar on Twitter, giving us an idea of what his take on the character may look like.

Superhero comic-book holiday specials have been a tradition since, at least, Superman’s Christmas Adventure in 1940 and DC has been making sure to keep the tradition going in recent years, often with Swamp Thing. 2018 saw an explosion of new anthology, seasonally-themed fare like the Swamp Thing Winter Special one-shots to supplement the usual holiday specials. The same year, the infamous creature was even featured on the cover of the Valentine’s Day special Young Monsters in Love. This latest Halloween offering fits perfectly in with this trajectory.

DC’s official solicitation for the Halloween-themed anthology specifies that the one-shot “reveals past lives… from ancient Rome to the present day” so it would appear DC is expanding on the concepts of Moore’s celebrated run. Mike Perkins’ cover for the upcoming anthology depicts the Parliament of Trees, a Moore created group of immortal ecological figures made up primarily of past incarnations of the Swamp Thing, so fans can expect Legend of the Swamp Thing Halloween Spectacular to be trippy as well as creepy. The book is scheduled to hit stores October 6th, 2020.

Next: DC Universe’s Swamp Thing Will Air On The CW This Summer

Jon Gorga has been reading, writing, and editing the world of comics and pop culture for pretty much forever. In 2013, after stints in the trenches of comics blogging, comics store clerking, and comics store managing he opened up the tiniest, strangest comic-book store NYC had ever seen: Carmine Street Comics. In 2017, he made his debut as the editor of the GLAAD-nominated mini-series “Quantum Teens Are GO!” and he began writing about comics for ScreenRant in 2020.

The Horror of the Ticking Clock in ‘Dead Rising’
WWE’s The Big Show Talks Potential Retirement and Teaming with Gabriel Iglesias for Netflix
Zelda Williams Calls Out Eric Trump For Posting Late Father’s Biden Jokes To “Further Political Agenda”
Simon Cowell To Undergo Surgery After Breaking His Back In Electric Bike Accident
Jana Duggar Pokes Fun at Her Single Self: Who Wants to Date Me?!?