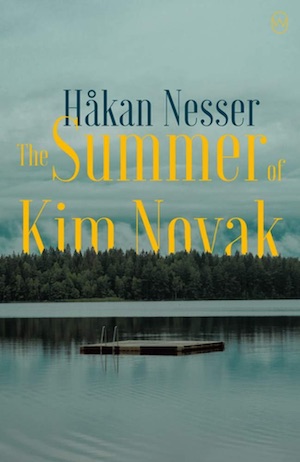 Translated by Saskia Vogel — Most readers will know Håkan Nesser for his popular and widely read Inspector van Veeteren series set in the fictional city of Maardam. Nesser didn’t set the series in Sweden because he loathes the stereotypical depressed characters and dark and dreary setting the rest of the world associates with his country.

In the Summer of Kim Novak there’s no trace of van Veeteren, the lost, tortured detective who is reminiscent of Kurt Wallander. In fact, there’s little trace of anything typical of Scandinavian crime fiction here. Despite the occurrence of a murder, the overall feel is playful, often humorous and tells the coming-of-age story of two teenage boys. Originally published in Sweden in 1998, this translation follows an earlier printing in 2015.

The narrator is 49-year-old Erik who looks back at 1962 when he spent his summer holiday at the family’s lake cabin. From the start we are warned that he remembers this particular summer because of a terrible event. Erik’s retelling immerses us in a world of a precocious, hormonal 14-year-old boy who talks in philosophical one-liners because, apparently, that’s how adults speak.

His father is his prime example – being much older than his son at 57 he frequently runs out of useful things to say and will merely mutter “It is what it is”, “Keep your head in the clouds and your feet on the ground” or “A man’s gotta do what a man’s gotta do”. One observation carries more weight – he predicts that it will be a rough summer. His ominous tone is justified. Erik’s mother is dying of cancer and the chances are slim that she will live much longer. Subsequently Erik’s father suggests that Erik, his brother Henry and his newly-acquired friend Edmund spend the summer at Gennesaret, their house by a lake called Möckeln.

Before their vacation starts, the boys’ lives are turned upside down by the arrival of Eva Kaludis, their substitute teacher and the spitting image of Kim Novak, the star of Vertigo. Blonde hair, tight-fitting clothes – the boys become obsessed with her. However, the Swedish handball legend Bertil ‘Berra’ Albertsson is there too and he’s Eva’s fiancé.

What follows for the boys is a month of swimming, bicycling and dreaming about Eva while Henry, a journalist at Kurren, the regional newspaper, attempts to write a great literary novel. In-between he finds time for the odd affair and when Eva Kaludis shows up at the cabin, Erik realises that his father’s worrying prediction might come true.

Berra Albertsson’s body is found in a parking lot near where the boys are staying – mere hours after he came looking for Henry at the cabin. Soon Detective Superintendent Verner Lindström is hot on Henry’s trail, he becomes the prime suspect and the murder is called a crime of passion. The only thing missing is the murder weapon, a blunt object such as a hammer.

Erik’s admiration and wonder for his brother Henry shines through throughout. Henry, who ran away from grammar school and showed up at their parents’ door a year later “…carrying a sailor bag and a bunch of bananas slung over his shoulder.” He’d been travelling around the world and had a rose tattooed on his arm. Most of the time Erik doesn’t know what Henry means when he talks about being ‘a freelancer’ or ‘slipping it to some skirts’ in Amsterdam, but he pretends that he does.

Twenty-five years later Erik reads about the unsolved case in an article. When Detective Verner Lindström shows up at Erik’s house reminding him that the statute of limitations will run out on the case two months later, Erik seeks out Edmund for clarity.

Although The Summer of Kim Novak is a heart-warming, sometimes hilarious coming-of-age story, a thread of melancholy and sadness runs through it. It conjures up feelings of nostalgia and regret for a bygone time of innocence and the simplicity of childhood friendships.

Especially noteworthy is Nesser’s acute ability to create full-rounded, convincing characters and at times, truly laughable moments and dialogue. One example is Erik’s Aunt Rigmor, the co-owner of the cabin, who ended up in Dingle Asylum due to “a moose-based tragedy”.

Although the narrative of the murder only appears late in the novel, it still leaves the reader in the dark, wondering who the killer could be. In the end the revelation packs quite a satisfactory punch. Don’t expect a novel similar to Nesser’s van Veeteren books and you’ll be pleasantly surprised by The Summer of Kim Novak’s warmth and wit.