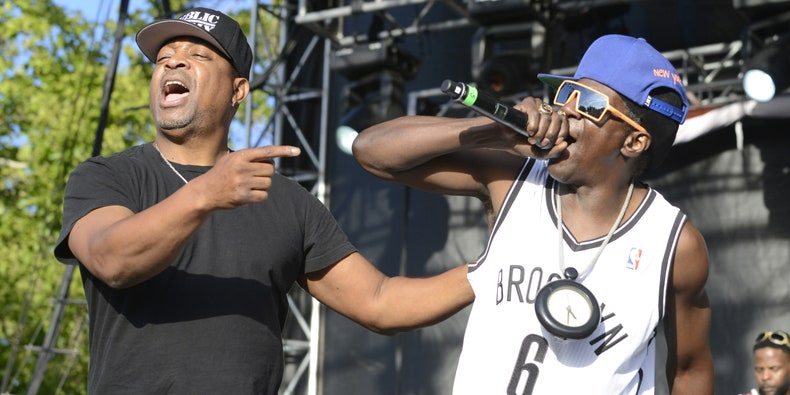 The public feud between Flavor Flav and Chuck D reached a boiling point in early March when Public Enemy announced that Flav was fired from the group. As it turns out, the whole dust-up appears to have been an elaborate ruse to help promote a forthcoming Public Enemy Radio album—due in April—featuring both Chuck and Flav. A new song featuring both men called “Food As a Machine Gun” is reportedly coming tomorrow (April 1).

In an interview with Talib Kweli on the Uproxx podcast People’s Party (recorded on March 10), Chuck outlined some recent discussions with Flav about public opinion of both men. “We felt that over the past few years, Flavor’s stock was low,” Chuck said. “Anybody that could take a shot at him could get a good shot at him.” Meanwhile, Chuck said that his own stock had been on the rise due to Prophets of Rage’s success. Chuck then described how he and Flav created a public breakup narrative while collaborating on new music and staying in contact behind the scenes. Watch the interview excerpt below.

To recap, here’s how it played out in the public eye: After it was announced that Public Enemy Radio would play a Bernie Sanders rally in Los Angeles on March 1, Flav issued a cease and desist letter to the Bernie Sanders campaign alleging that his likeness was used without his permission. Public Enemy released a statement announcing that Flav was fired, and Flav responded by criticizing Chuck on social media.

Chuck implied that media coverage of this back-and-forth was part of their plan.

“We already talked about this beforehand. Public Enemy Radio went up
[at the Sanders rally]. His lawyer sent out a cease and desist. I’m
like, ‘Good move.’ Then, publicly: ‘Man, you don’t fuckin’ sue me
again.’ He ain’t suin’ me. But I can say it! If the public is confused
about this, that, whatever—they’re gonna be confused about what’s a
lawsuit and what’s not. ‘Yo man you suing me again publicly? Boom.
Fuck that. You’re fired dude. This is my last thing with you.’ OK. We
knew what was gonna come. I’m not sayin’ it’s a hoax, I’m sayin’ that
the original intention is to get your attention and not play
attention, but get you to pay attention.”

When asked about Flav’s status in the group, Chuck confirmed that Flav can’t be fired from Public Enemy. “He can’t, he’s a partner. You can’t fire partners. You just walk away from ’em.” Chuck said that he and Flav had been working on a new Public Enemy Radio album since the end of February. “There’s a select few that do know—that I had to let know—that me and Flav have been better than ever.”

Pitchfork has reached out to Public Enemy, Flavor Flav, and the Bernie Sanders campaign for comment.