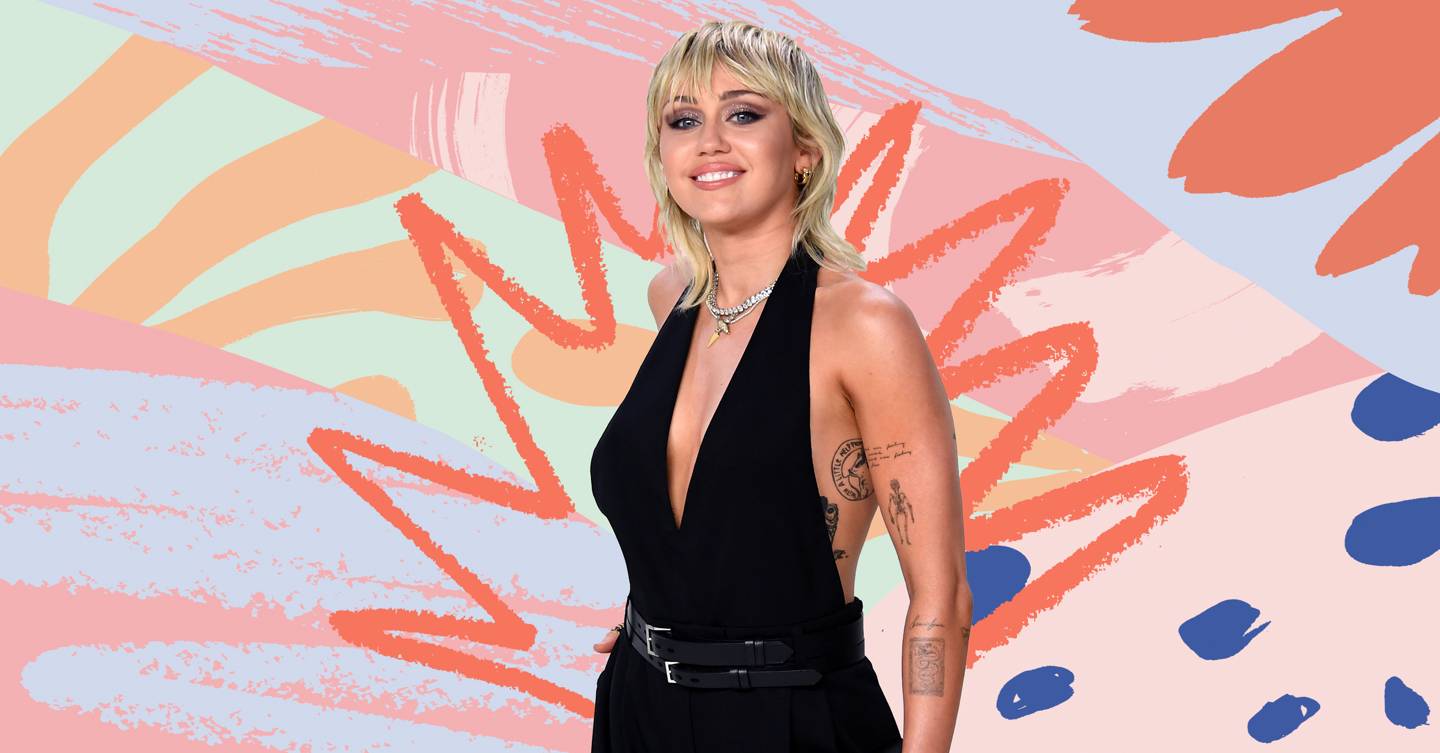 While Jimmy Fallon has his hands full at home with feral (but adorable) kids, Trevor Noah serenades his neighbourhood from his balcony, James Corden gets sentimental over the Late Late Show and Ellen dials her celeb pals deliriously from her sofa, one surprise samaritan has stepped in to fill the role of talk show host.

Barely days into the social-distancing efforts in America, Miley Cyrus struck up her own solution, jumped on a video call to her psychiatrist (aptly named Dr Amen), recorded it and shared it with her 105 million Instagram followers (who she gathered, might be in need of a little virtual therapy). Thus the Bright Minded talk show was born. Episode 1. Done.

Next, she caught up with Disney pal, Demi Lovato, to talk about tips for staying lit in dark times, she handmade her own talk show mug (proper dedication) and she introduced a new daily segment, Seven Minutes With Saul, her personal trainer, to lead everyone stuck at home through a light pilates workout. “Every day we’re getting just a little more official,” the singer remarked.

The reason for its inception? “I created the show [to provide] emotional support at a very stressful time full of chaos and confusion. I want to bring light into a dark time,” Miley says.

Seven days – and seven episodes – in and Miley’s chatted to Amy Schumer, Rita Ora, Jeremy Scott, Hailey Bieber, Lauren and Cameron from Love Is Blind and her own rockstar dad, Billy Ray Cyrus, to name a few. Each instalment is getting more swish. As of episode six, the show has a logo, an animated intro, a jingle (sung by Cyrus herself) and a dedicated schedule (Monday to Friday at 11:30am PST – which is 6:30pm our time, fyi). The host though? She’s still keeping it real. “This is a stain,” she says pointing to her knackered Nike sweatshirt. “I have not gotten out of these sweatpants for five days.” We can relate.

So, if you haven’t seen it yet, here are the 5 top things we’ve learnt so far to catch you up.

1. The helpful or hurtful trick

In the first episode with Dr Amen, Miley talks about how the global situation has left most of us feeling helpless. But they discuss steps that we can take as individuals that can have a huge impact. “Everyone’s so quick to share the bad news but we could start by sharing only what’s helpful,” Miley says.

Miley shared how Dr Amen helped her lots last year in her journey toward becoming sober. “Before I grab a jar of weed, before I choose to pour another shot or to go out with a group of friends that keep me vulnerable, was ask: ‘is this going to be helpful, or is this going to be hurtful. And if it’s going to be hurtful, then we do not participate in it.'”
We can take this same attitude in our response to the global pandemic by considering how helpful or harmful our actions will be. For instance, before going to see a friend or leaving our house.

2. Opening up about body image

During her chat with Demi Lovato, both singers opened up about their relationship with their body image and the struggles they’ve had with tackling their own negative thoughts and external negativity. Miley described how hurtful comments about her outfit during her VMA performance with Robin Thicke meant she didn’t wear a bikini or shorts for years after. She also shared how she suffered with problem skin particularly during her teens and would focus in on that every time she looked in the mirror.

Demi revealed she too struggles with body dysmorphia but noted that: “When I look in the mirror, if I can just go ‘I’m grateful for the body that’s gotten me through every day of my life, no matter what I’ve put it through. I’m grateful for the health and strength I have today,’ that helps me be grounded in my body and it helps stop those negative body image thoughts.” Miley confided that rather than trying to find things about her body that she loves, she focuses on picking out things about herself that she likes and knows to be true. “I’m someone that always puts others before myself and it’s a quality that I don’t want to change because I really love it about myself,” she said.

3. The shows the celebs are binge-watching

We’re all guilty of a Netflix series binge and it seems the chat on the Hollywood circuit sounds pretty similar to the ones we were having in our office. Whilst chatting with Amy Schumer, Miley revealed she’d be talking to Lauren and Cameron from Love Is Blind. “Get some tea! It’s what we want more than anything,” declared Amy. “I think we’re pretty upset – more than anything – that Daytona is cancelled,” she continued while referring to the Netflix smash Cheer. Beyond that, Amy recommended Love After Lockup and 90 Day Fiance, while both waxed lyrical on their love for Vanderpump Rules.

As GLAMOUR’s Entertainment Director, I *promise* these are THE best TV boxsets to watch now

4. How to up-cycle your clothes with Jeremy Scott

“Your body may be in quarantine but your mind doesn’t have to be, so we can expand our minds at this time and continue to learn, to experiment, to be creative,” Jeremy Scott told Miley while encouraging viewers to get a bit more crafty with their clothing to maximise our wardrobe and the time they spend in quarantine.

In the episode he walked Miley through repurposing an old pair of track pants or jeans by sewing on a vintage design cut out from an old T-shirt. “This doesn’t have to be perfect, this is fun, so if you have no skills of sewing, who cares about that. This is about making something custom because everyone’s an individual so why not let your freak flag fly,” he said. And, if you don’t have a needle and thread handy, he recommended using safety pins. “We want it to be a DIY, punk and kind of rebellious.” Miley even suggested using tape if you want to try a few different designs out before committing.

A final style tip? Keep a semblance of normality, advises Jeremy, keep getting dressed and keep spritizing your perfume, even if there’s no-one else there to sniff it. You’ll feel miles better.

After Miley asked her about her spirituality and where she goes to find a reliable source of comfort, Hailey noted: “Reliable sources can be multiple different things: family, friends, therapists. I’m super open and vocal about being raised in church, but I think there’s a difference between being raised in church and being an adult and having your own relationship with God. What my relationship was with faith getting raised with it is completely different than it is for me in my own journey as an adult. I feel like I’ve found my footing with spirituality and I’ve found a church community that works for me, where I feel accepted and supported.”

Miley confessed she’d moved away from her church upbringing after struggling to accept its attitudes towards her gay friends and her own sexuality, but hinted at giving it another go: “What I just took away from you is – I’m allowed to decide what my relationship is with spirituality as an adult, that doesn’t have to be aligned with the way that it was when I was brought up. Now, you telling me that I’m allowed to re-define my relationship with God as an adult and make it how it feels most accepting to me would make me feel much less turned off by spirituality.”

“I’ve always had a hard time with church making people feel excluded and not accepted because of what they believe in or who they love,” agreed Hailey. “I just don’t believe that that is what God is about, at all.” But she noted, just finding a tribe that works for you is what counts. “Having community in general whether it’s a church community, a sports team, a book club – any group that you feel you can rely on and there’s no judgement – is really important.”

Showbiz Stocks Surge From Theater Chains To Broadcasters On Glimmer Of Market Hope Pandemic Is Running Its Course
5 Major Disney And Universal Theme Park Projects Likely Delayed By Closures, And One That Isn’t
This Friends-Themed Guess Who? Board Game Has Me Saying “Oh My God” in Janice’s Voice
Mother of deceased B.C. teen actor Logan Williams says funeral on hold due to COVID-19
25 Best Movies on Amazon Prime Right Now (April 2020)