Thirsty Curse’s self-titled alternative rock album is a noteworthy work of art that will
steal your heart away. “Thirsty Curses” carries unapologetic and simple human messages to all
its listeners. Each track of this album refuses to hide raw emotion from the weight of life, but
also leaves traces of hope between the lyrics. “Thirsty Curses” is like shifting clouds in a foggy
winter day that invite temporary beams of light to shine through the gloom.
The opening track, “VHS Release,” is the perfect intro for the drive of this album. The
first line sings, “Feels like I’m living through a sequel that was a ‘straight to VHS’ release.” This
one line prepares its listeners for all the messy, vulnerable, honest, and yet undeniably charming
lyrics that the album gifts its audience. Not only do the words speak out true emotions, but so do
the melodies and choice of instrumentals.

For example, “G.D.M.N.T.” starts out with a beautiful acoustic guitar walk-down, with a
folksy Avett Brothers sound. The listener is almost expecting a nostalgic tune or a sentimental
love song, but the poetic lyrics and change of musical pace lead to something even more
receivable. As the song goes on, the band brings in the drums to carry along an optimistic
sounding group ballad. It starts to become a tune that, for some, may be a song to truly live by.
Towards the end, the listener may feel as if they are surrounded by a group of friends at the bar
singing along to live music. The chorus line says, “… God don’t make trash, ah yeah. He sure
likes to get a laugh … Working off the sins of Eden.” Whether these lyrics contribute to some
kind of religious message, the words are still phrased in such a down-to-earth manner, that
anyone can sense its fight against self-detrimental thoughts and the chaos of life. 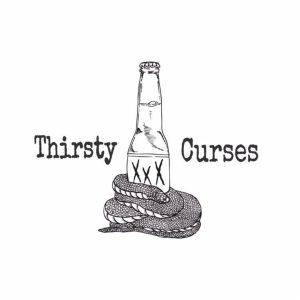 Despite the eclectic choice of genres mixed in this alternative rock masterpiece, the
album itself is well-balanced and true to its unique voice. Sometimes, the band creates a folk,
Brandi Carlile/ The Head and the Heart musical vibe. This sound is presented in a song such as
“Slice of Paradise” with its acoustic and old style country sort of narrative. Some melodies have
a grungy, (yet lyrically and melodically organized) punk-rock sound in, “Smash-Hit,” and “Cold
Blank Ink”. These tracks are upbeat, but, have a more aggressive instrumental style. The most
distinct or standalone track of the album is, “You Don’t Have to Tell Me.” This is attributed to
the chorus which seems to hint towards a Vampire Weekend style of throwback “call and
answer” chants of the 50s and 60s.

“Thirsty Curses” is a stimulating medium for minds searching for pieces of their imperfect world
in a song. No narrow road lies between the punk-rock advocates and the Americana/folk fans on
a well-crafted album such as this one. May you continue to be “thirsty” for what more is to come
of these great musicians, and may you also be “cursed” with sound of some genuinely good
music resonating in your heart.