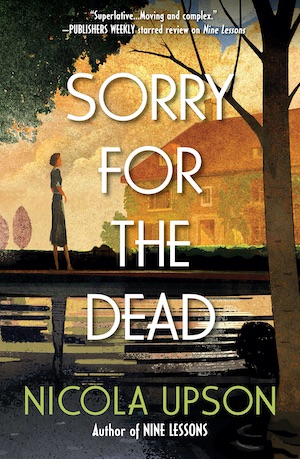 Written by Nicola Upson — Those who enjoy Nicola Upson’s series featuring unconventional crime writer Josephine Tey, cast as a detective, will be used to the celebrated playwright and crime writer moving in glamorous circles in 1930s London theatreland and hobnobbing with the likes of film director Alfred Hitchcock. In this eighth outing for Tey we get three timelines and an insight into her life as a young teacher. The real Tey trained as a physical training instructor before her writing career took off.

Sorry for the Dead is billed as a compelling murder mystery and a moving exploration of love and grief, but you may find the murder is a long time coming if you are impatient to get to the crime. Most of the first half of the book is taken up with setting the scene and revealing the characters’ relationships.

The first few pages are intriguing and centre on an unnamed woman making plans to die in 1948 shortly after Tey has left her house. It’s a heart-breaking scene, as the woman feeds her cat with his favourite meal before poisoning him and seemingly taking her own life.

We move next to 1938 and a brief visit to Charleston, the old farmhouse in Firle in the Sussex Downs where Tey meets the residents Vanessa Bell (Virginia Woolf’s sister) and her lover the artist Duncan Grant, who lived there in the 1930s, when it was a country base for the Bloomsbury Group. Tey remembers her time at the house 23 years earlier as a new teacher when Charleston was a horticultural college for young women. She has memories from 1915 of student Dorothy Norwood, who fell to her death from the roof of a greenhouse after a big argument with her sister Betty.

Back in the summer of 1915 Tey has arrived to teach a band of spirited young women who are learning how to tend plants and crops to feed the home front, with some hoping to forge a career in horticulture. There’s a positive theme of feminism at the heart of college life, but a backlash at the local pub where men are grumbling about women taking their jobs. At the nearby army camp we have an all-too-brief appearance by a young soldier, Archie Penrose, who in later life becomes a detective inspector and teams up with Tey to solve many of the mysteries in the earlier books in the series. Having enjoyed getting to know Penrose the adult detective over seven books, I would have loved to have learned more about him as a young man heading off to war and seen more interaction between him and Tey.

The long build-up through the first half of the novel to the sudden death of Dorothy Norwood may leave you impatient for some action. When the girl comes crashing through the glass of the greenhouse in a dramatic scene it isn’t a moment too soon (sorry to sound callous).

It’s not clear whether the death is suspicious for many years, but it does immediately bring grief and notoriety to the college run by two women, Harriet and George, who are carefully guarding their secret of lesbian love. The young Tey is embarking on her first love affair, with fellow teacher Jeannie, and are both walking out on the Downs just before the tragedy strikes. When they arrive back at Charleston, Tey is on the scene as the girl’s life ebbs away and is left guilt stricken when she cannot save her. The situation is chaotic as the gardens are in the grip of a storm and all the girls are wearing oilskins and it’s impossible to know who was there at the time and who was not. The college cannot recover from the fallout after the death and shuts down.

In 1938 Tey is at the theatre in Cambridge, the city where she now lives, with her partner Marta when she learns that a journalist – more of a gossip columnist – and a former student at the college has written a piece about the 1915 tragedy alluding to Tey’s presence there. This prompts our protagonist to face the possibility that the scandal, which threatened to destroy the women’s lives, hid a much darker secret. She begins to track down the figures from her youth and discover what really happened at Charleston. Was it a tragic accident or murder? It appears that murder wasn’t investigated.

This forces her to question how well she knew her friends, colleagues and the students back in her youth and find out who is still trying to hide the truth from her. I wondered if it is unlikely that she wouldn’t have questioned this earlier in her life.

It is only in the second half of the book that the build up and backstory pays off as you become reacquainted with the older versions of the Charleston characters and relish each re-encounter and the plot picks up pace. I have been a big fan of this series for nearly a decade, in no small part because I love the way Tey and her inner circle interact and their relationships change over the years. However, you may agree that a bit more jeopardy early on would have upped the stakes.

You can read about the previous book in the series, Nine Lessons here.