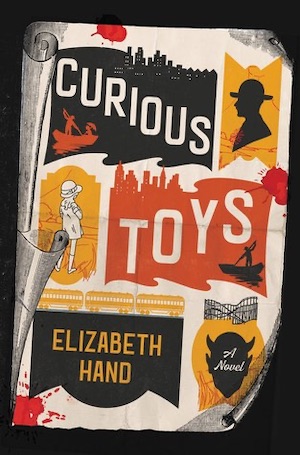 Written by Elizabeth Hand — It is over three years since Elizabeth Hand released a crime novel – 2016’s Hard Light continued her run of the acclaimed Cass Neary series – so the arrival of this standalone historical thriller was greatly welcomed by us and her fans.

The setting is the Riverview Amusement Park, Chicago in the sweltering summer of 1915. Pin is a 14-year-old girl living with her mother Gina in a lean-to shack on the edge of the park. Gina works as a fortune teller in the park during the day and as a dance instructor in the evenings, managing just about to keep their heads above water. Pin has no father and her younger sister, Abriana, was abducted two years ago. She dresses as a boy, cutting her hair short and wearing a truss to hide her figure.

Pin hasn’t started high school yet and spends her days at the park hanging around with a gang of boys, none of whom have guessed her real gender. She delivers packages of cannabis cigarettes for Max, another of the acts at the park. One of her clients, Lionel, is a screenwriter at S&A studios, and the novel is set before the Golden Age of Hollywood, when films were still made at locations throughout the United States. Pin likes to hang around the studios, learning about the business and hoping to be a film editor when she grows up. And, she has a crush on one of the starlets.

One day at the park, Pin notices a man accompanying a young girl on the Hell Gate ride where boats are propelled from the lake into an underground tunnel before emerging on the other side. The man exits alone. Alarmed, Pin sneaks into the tunnel and discovers the girl’s corpse. The police discover the murdered girl has been smothered after being dosed with a morphine-smeared lozenge but powerful vested interests from business, law enforcement and the mayor’s office are determined to keep the park open. The death of one little girl doesn’t count for much.

Curious Toys is very interested with women’s experiences and Pin is an excellent character via which to explore this theme. She is smart, resourceful and resilient, and as a result is an engaging, sympathetic protagonist. She resents the limitations society places on her gender. The tone is never hectoring and Elizabeth Hand is careful to show, not tell, the obstacles and injustices placed in Pin’s way. Perhaps this is best demonstrated at the end of the novel when Pin’s achievements during the mystery of the dead girls are overlooked in favour of the men involved.

Indeed, it is not long before another girl dies. Francis Bacon, one of the park police makes the connection between the first girl and other murders of girls at amusement parks across the country. Still, the prospect of further deaths is not enough for the park to close. And so it is for Pin, with the help of a damaged young man, Henry, to solve the murders herself. But she will have to place herself in mortal danger to do so.

Almost all of the action takes place in the amusement park, which is brilliantly brought to life through Pin’s eyes. It is a place of almost limitless opportunity where you feel anything could happen, but with a palpable sense of danger too. Criminality is rife, almost all of the rides are rigged, and the massive crowds provide perfect cover for the predator.

Curious Toys is Pin’s novel but her narrative is supported by point-of-view chapters from Henry, Francis and the killer’s perspective. Furthermore, the author weaves some famous faces into her narrative including Gloria Swanson and Charlie Chaplin, but always with the sense of building her story or strengthening her theme.

It all adds up to an engrossing novel. Curious Toys is beautifully written, thrilling, thoughtful and empathic. It will surely be one of the crime novels of the year.

Also try Joyland by Stephen King and The Axeman’s Jazz by Ray Celestin for some similar themes.

Shetland on BBC One: What happened to Jimmy Perez’s wife in Shetland?
Hollywood Weighs Pros And Cons Of New IATSE Contract As More Details Emerge – Update
Beautiful wavy haircuts if your hair isn’t curly, but isn’t dead straight either
The 12 Best Beauty Deals at QVC’s Great Big Holiday Kickoff Event
We Have Jessica Chastain To Thank For Full-Frontal Oscar Isaac in Scenes From A Marriage